Arkansas Employment and Unemployment – May 2020

Last month, the April employment report for Arkansas was not as bad as expected.  The May report is better than expected. 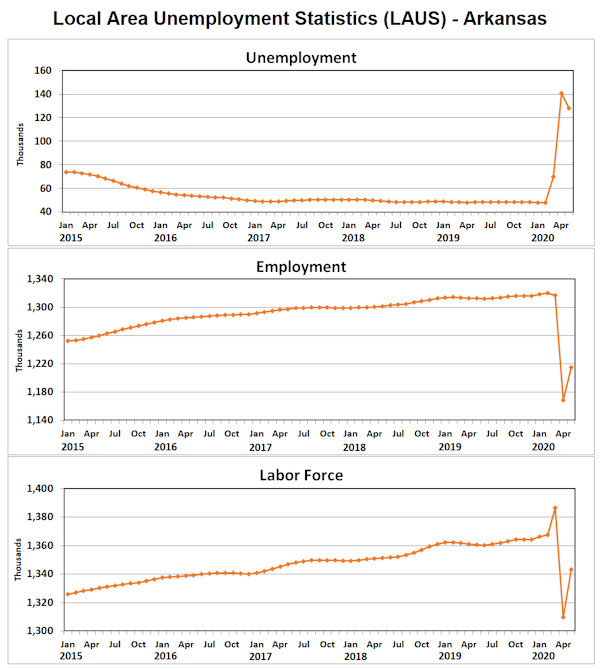 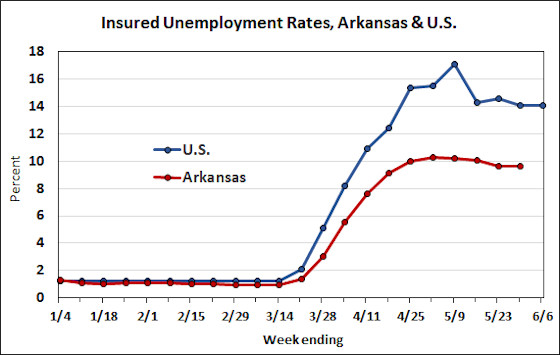 The elevated unemployment insurance claims levels suggest that there is a great deal of churning going on in labor markets, complicating the interpretation of the unemployment data.  In addition, there continue to be some survey problems in the proper classification of “employed” versus “unemployed” for persons displaced by COVID-related shutdowns. But the clear gains employment (reinforced by the payroll data), indicate that the labor market improved in May, and that Arkansas has thus far fared better than the rest of the nation, on average.

Payroll Employment
Nonfarm payroll employment jumped 21,400 in May, bouncing back somewhat from a revised 109,200 decline in April (seasonally adjusted).  The April report had shown proportionally smaller declines for Arkansas than in the U.S. data, particularly in sectors directly affected by COVID-related shutdowns (e.g. Retail Trade and Accommodations & Food Services).  Consequently, we had not expected to see as sharp a rebound in May as reported in the national data.  As it turns out, the May rebound in Arkansas was a 1.8% jump, nearly equal to the 1.9% increase for the U.S.  From February through May, Arkansas payroll employment has shown a net decline of 7.6%, compared to 12.8% in the U.S. data. 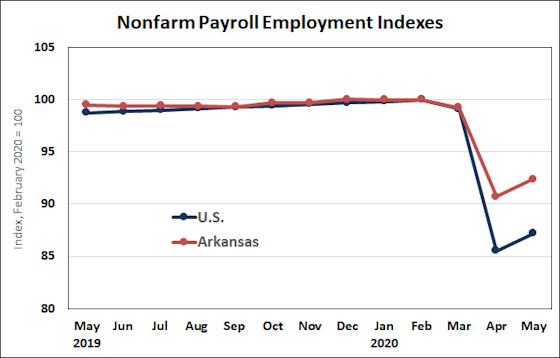 A breakdown by sector shows that the largest employment gains were in Leisure & Hospitality Services, Education & Health Services, and Retail Trade, each of which suffered particularly sharp declines in April.  Not all sectors saw increases in May:  Employment in Wholesale Trade dropped slightly, and Manufacturing employment slid deeper into negative territory.  Government employment declined by 4,400, due to employment declines at educational institutions.  This decline is not unusual, but it typically shows up in June and July.  Compared to a year earlier, payroll employment in Arkansas was down 91,000 jobs. 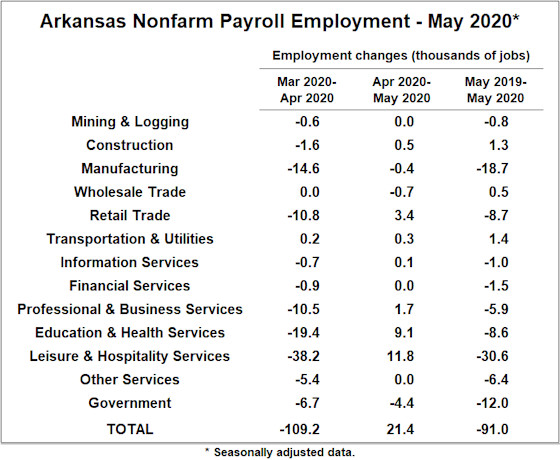