As the economic impact of the COVID-19 pandemic continues to unfold, one constant is the rapid pace at which the situation is developing. Just one month ago, our May forecast came out in the wake of the April employment report, which showed U.S. payroll employment plummeting by over 20 million and the unemployment rate rising to 14.7%. The ongoing accelerated pace of initial claims for unemployment insurance suggested that labor markets would continue to decline, both nationally and here in Arkansas. 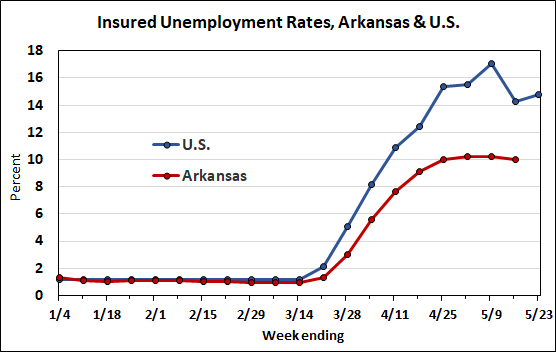 The release of the state-level employment report for April provided further evidence of Arkansas’ relative resilience to the economic downturn. If every sector in the Arkansas economy had suffered the same proportionate losses as shown in the U.S. employment report, we would have expected a decline of 160 thousand jobs in April. Instead, the decline was “only” 100 thousand.  It was telling that the sectors in which Arkansas outperformed the national economy included some of those most-impacted by COVID-related economic shutdowns; for example, both Retail Trade and Leisure & Hospitality contracted far less than the national average. Construction and Manufacturing also experienced smaller declines in Arkansas than in the national data.

Another piece of information came from the state revenue report for May, which showed Sales and Use Tax collections down only 2.8% from a year earlier. That was 8.5% above the forecast of the Arkansas Department of Finance and Administration and similarly above our expectations.

But the most paradigm-disrupting development over the past month was the unexpected rebound of U.S. labor markets that was announced last Friday (June 5). The May employment report showed a one-month increase in payroll employment of approximately 2.5 million and a decline in the official unemployment rate to 13.3%.  The increase in payroll employment was the largest one-month gain ever recorded for the series and was the largest monthly percentage increase since WWII. In the context of the 22 million decline in employment over the previous two months, the May rebound might be characterized as a “dead-cat bounce.”[1] Nevertheless, it showed that the limited re-opening of the economy around the country was generating a more rapid and robust resurgence of economic activity than most economists had expected. 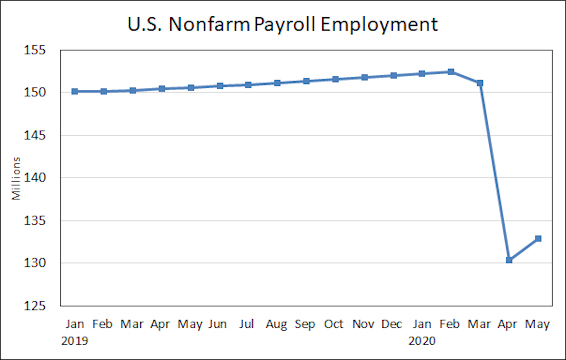 In this updated forecast report, we present new projections for the Arkansas economy in light of recent developments. The forecast is based on the latest update to the national outlook from IHS Markit, originally dated June 4, but updated on June 8 to account for the surprising U.S. employment report. The June IHS forecast projects second-quarter GDP growth falling at an annual rate of 42% — down from the 36.5% rate of decline forecast a month earlier.  National unemployment is now projected to peak earlier at only 13.4%, with the peak now coming sooner (in the second quarter rather than the fourth).

As with our previous forecasts for the Arkansas economy, we have applied the recent IHS national forecast changes to the model for Arkansas, adjusting the components of each aggregate separately in order to capture some of the unique characteristics of the Arkansas economy. Our forecast is also informed by a recent update to the IHS Arkansas model that reflected the assumptions in the previous (May) national model. In addition, this forecast update is adjusted along several margins to reflect the relatively-strong performance of the Arkansas economy. We take explicit account of the effects of higher earnings and spending that are likely to accompany the improved employment outlook, adjusting the model-generated forecasts to match emerging data for the state.

Employment
The most significant revision to the forecast is, once again, the outlook for employment.  A month ago, we expected payroll employment to decline through May or June, with recovery slowly taking hold in a partially-reopened economy. The rebound of U.S. employment in May changes that outlook dramatically. Because the Arkansas economy has been proportionately less affected by employment declines in March and April, a significant May rebound is considered unlikely. Nevertheless, the flow of job-losses is expected to have abated.

The latest forecast indicates total job losses of 110,000 in the second quarter, a drop of 8.6% from the first quarter. The May forecast had projected job declines nearly twice that size.  A likelihood remains that we might see further declines in the third-quarter as firms adjust to the limited reopening of the economy. Gradual recovery and steady positive job-growth is now expected before the end of the year. 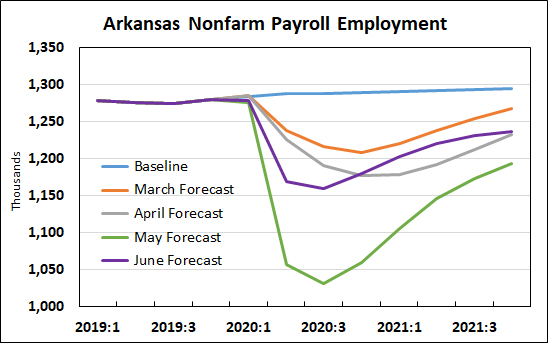 Unemployment
Even in the best of times, the unemployment rate can be a tricky measure to interpret.  Based on a nationwide survey, the rate presents the number of unemployed as a percent of the labor force, where movement into and out of the labor force complicate matters.  In the present setting, interpreting the underlying survey results has also been problematic. In March, April and May, the Bureau of Labor Statistics noted that many workers affected by COVID-19 shutdowns were incorrectly classified as “employed but absent from work” instead of “unemployed on temporary layoff.” The BLS reports the survey results as the official statistics, but has provided estimates of how this misclassification might have affected the reported unemployment rate. As shown in Table 1, correcting for the misclassification might add as much as 3 to 5 percentage points to the reported rate. The BLS has reported that the error is not specific to any state or region, so it is unclear how it has affected the measurement of Arkansas’ unemployment rate.

Measurement problems notwithstanding, Figure 4 shows the latest outlook for unemployment based on the typical relationship between household employment and payroll employment. Just a month ago, the forecast indicated unemployment in the range of 16 to 17% through the end of 2020. The latest forecast shows unemployment remaining at around 10.3% through the summer before starting to decline in the fourth quarter. 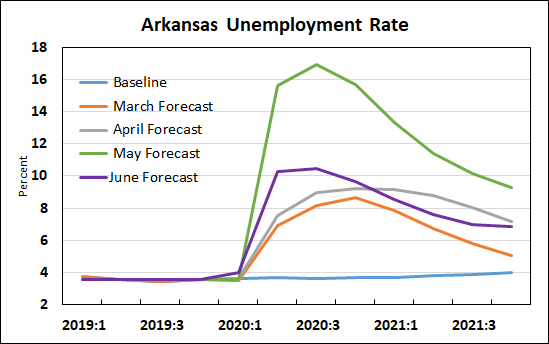 Personal Income
The latest forecast for personal income continues to reflect a combination of lower earnings, offset by a deluge of government transfer payments (which include special tax rebates and expanded unemployment insurance benefits). As shown in Figure 5, the effects of transfer payments imply a surge personal income in the second and third quarters, dropping off sharply after that. 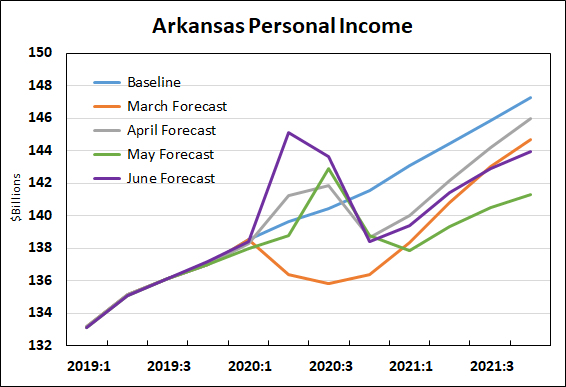 Figures 5a and 5b show how transfer income and non-transfer income are affecting overall personal income. Reflecting higher expected employment (and wages), the June forecast for personal income less transfer payments is expected to decline by only 7.8%. In May the forecast decline was 10.3%. Meanwhile, the timely distribution of tax rebate payments has increased total transfer payments expected in the second quarter, in part by moving them up from the third quarter.  In the absence of further policy actions, the transfer payments authorized under the CARES Act are expected to diminish in the fourth quarter. 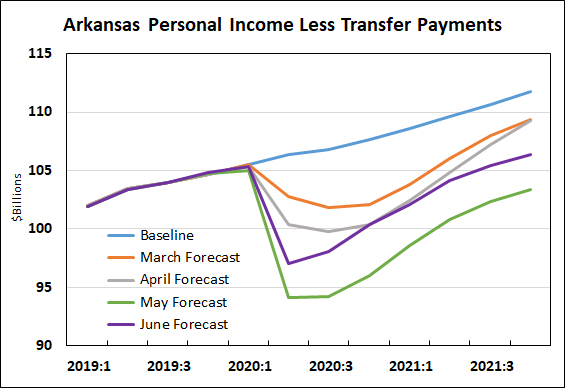 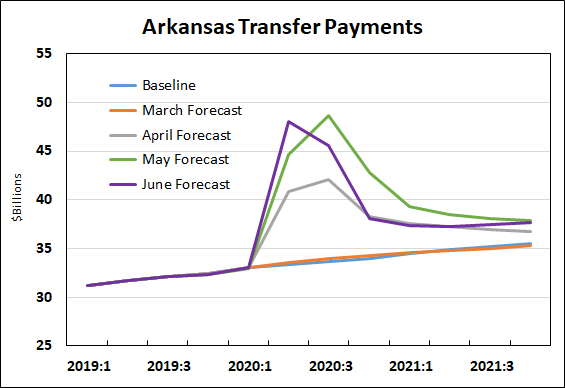 Consumer Spending
Despite the boost to incomes from expected transfer payments, we are still anticipating a sharp decline in Personal Consumption Expenditures (PCE), particularly in the second quarter. The combination of business closures and reduced non-transfer income is expected to suppress consumer spending temporarily. Ongoing economic weakness is expected to keep spending from accelerating to pre-COVID levels for some time. Although the surge in transfer income could buffer consumer spending from even larger declines, economic theory and evidence suggests that one-time payments result in relatively small boosts to current spending, with significant portions of the payments being saved or (equivalently) used to pay down household debt.

As shown in Figure 6, the latest forecast suggests a somewhat smaller decline in PCE than projected a month ago. The outlook now includes a slightly more rapid pace of recovery, reflecting improved expectations regarding employment and income. Spending in the second quarter is now projected to decline by 13.4%, slightly less than the 14.8% decline predicted in the May forecast. 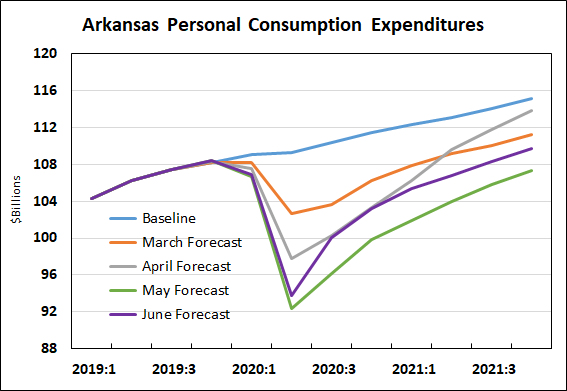 Table 2 compares the May and June forecasts for PCE, focusing on the two-quarter impact (2019:Q4-2020:Q2) of the COVID-19-related shutdowns. Projections for many of the components have changed little since last month, while others reflect specific sectoral information collected by IHS forecasters. Each of the series was adjusted to account for the higher income profile embedded in the June forecast.

The largest revision are in Durable Goods, particularly the Motor Vehicles & Parts component, for which data on both the national and state level indicate stronger-than-expected demand. The decline in nondurable goods is now expected to be somewhat larger, as some of the strength in Food & Beverages Purchased for Off-Premises Consumption (a.k.a. groceries) is expected to dissipate as the economy opens further. Spending on services is still expected to show sharp declines, although the magnitude of the drop in Food Services and Accommodations is now somewhat smaller. 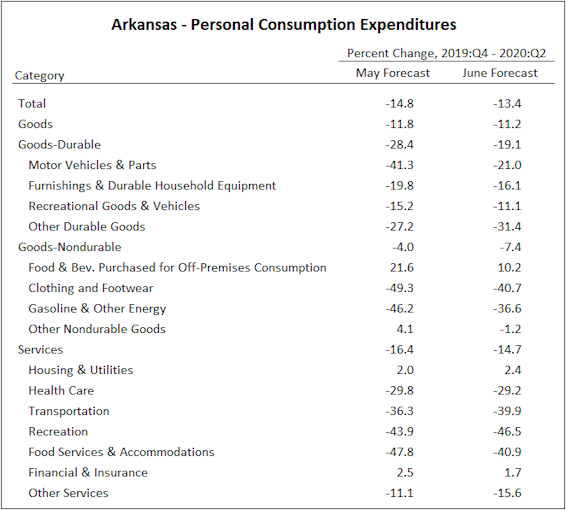 Figure 7 shows index values (relative to 2019:Q4=100), illustrating the relative paths for total PCE, Durable Goods, Nondurable Goods (less Gasoline & Other Energy) and Services. When gasoline expenditures are excluded, nondurable goods purchases are expected to remain relatively stable throughout the forecast horizon. But subtracting Food and Beverages Purchased for Off-Premises Consumption, the remaining components are expected to decline by about 10%. Driven by reduced spending on Recreation and Food Services & Accommodation, spending on services is expected to decline by 15%.  The largest declines are in durable goods, which falls by 19%.

One of the practical applications of the consumer spending forecast is evaluation of how sales tax receipts by city and county governments might be affected.   To assess the sales tax implications, we have been tracking a composite measure that is intended to mimic the taxable sales base.  This taxable sales proxy—shown in Figure 8—includes all Durable and Nondurable goods less Gasoline, plus Recreation Services and Food Services & Accommodation.

The outlook for taxable sales has improved in this month’s forecast, for the second consecutive month. The April forecast had shown a decline of 18.3% from 2019:Q4 through 2020:Q2.  In May, the projected decline was 16.7%. The latest forecast shaves that loss down to 16.1%.  Reflecting the more rapid and robust recovery of employment and income that is now projected, the taxable sales base is now expected to rebound more sharply than in either the April or May forecast. 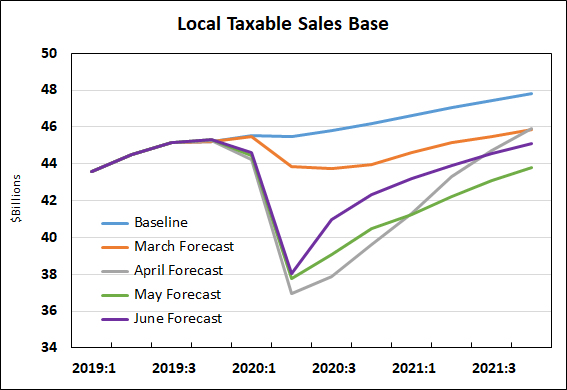 A PDF file of this report can be downloaded HERE.

[1] A dead-cat bounce is a term used in finance to refer to a small recovery in the price of an asset after a period of sharp decline. The name comes from the idea that even a dead cat will bounce if it falls far enough or fast enough. As a cat owner, the Arkansas Economist intends no disparagement of cats.