The Bureau of Economic Analysis released the state-level personal income report for the first quarter of 2020 this morning.  The BEA noted that this was the first-quarter to be “impacted by the response to the spread of COVID-19, as governments issued ‘stay-at-home’ orders” in the latter part of March.

The report shows that Personal Income in Arkansas rose at a 1.9% annual rate in the first quarter, somewhat slower than the U.S. rate of 2.3%.  Nationwide, growth rates ranged ranged from 4.9% in New Mexico to -0.3% in Michigan 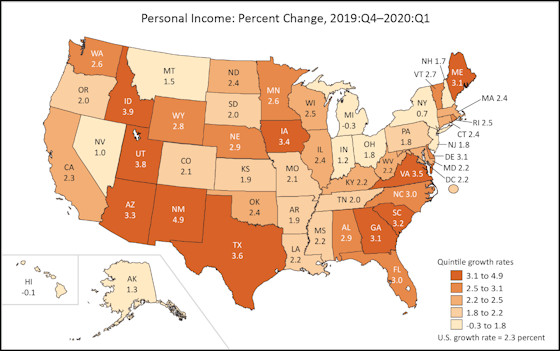 Arkansas’ growth rate for the fourth quarter of 2019 was revised down slightly from 2.7% to 2.5%.  Over the past four quarters personal income in Arkansas has increased 3.3%, while U.S. growth has been 3.2%. 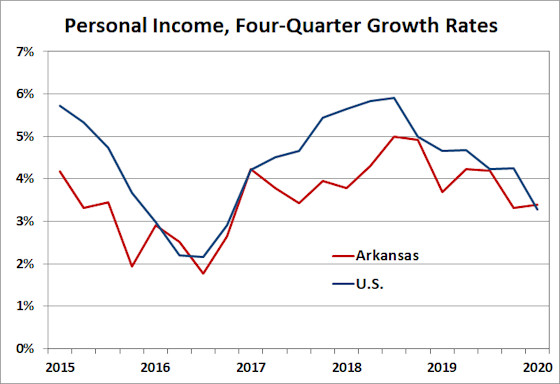 Arkansas growth rate in the first quarter was again buffeted by swings in Farm Income, which declined at a 68.5% annual rate, subtracting 0.9 percentage points from the overall growth rate.  The decline in Proprietors’ Income was also driven by Farm Proprietors’ component.  Nonfarm Proprietors’ Income was up at a 3.7% rate.  The BLS report noted that “increases in transfer receipts and property income (dividends, interest, and rent) contributed to personal income growth in all states and the nation.”  In Arkansas property income accounted for 0.6 percentage points of the states total personal income growth; transfer payments accounted for 1.4 percentage points.  Net earnings (which excludes contributions for government social insurance programs and is adjusted for state of residence) accounted for a tiny net decline (-0.1 percentage points) in total income.

The BEA noted that increases in transfer payments “reflected a 1.6 percent cost of living adjustment for social security recipients; an increase in state unemployment insurance compensation; and an increase in refundable tax credits.” 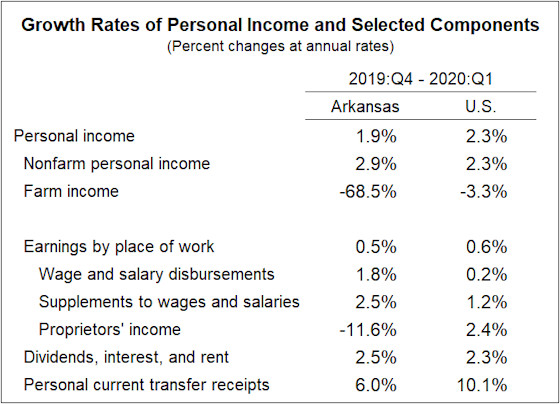 The table below shows a breakdown of total earnings by sector, expressed as contribution to total personal income growth.  In addition to losses from Farm earnings, Arkansas saw losses in Mining, Durable Goods Manufacturing, along with several service-sector categories.  Earnings in Health Care, Accommodation and Food Services, and other service sectors experienced earnings declines, but of smaller magnitude than the U.S. totals. 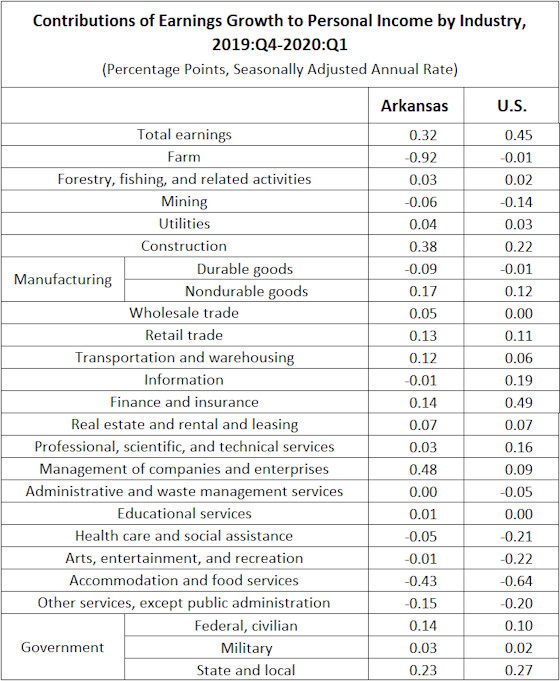 Covering the first quarter, today’s report encompassed only the very early weeks of the COVID-19 pandemic and the business shut-downs that it engendered.  The BEA took special steps to assure that the full impacts were reflected:  “BEA used both March and April CES state level data to better capture business closures and job losses that occurred in March. BEA also used weekly state level Unemployment Insurance (UI) claims data to inform its 2020 Q1 state estimates of wages and salaries.”  A fuller accounting will likely be embedded in the report for the second quarter.