As alarming as the unemployment rate increase appears, one should never become too concerned about a single observation. Indeed, the Arkansas employment data have recently been subject to considerable month-to-month volatility. Recall that the unemployment rate jumped to 7.4 percent in July before falling back to 7.1 percent in August and September. The chart below illustrates a three-month moving average of the unemployment rate, smoothing out some of the monthly variability. By this measure, the rate has been fairly steady at around 7.25 percent since mid-summer. 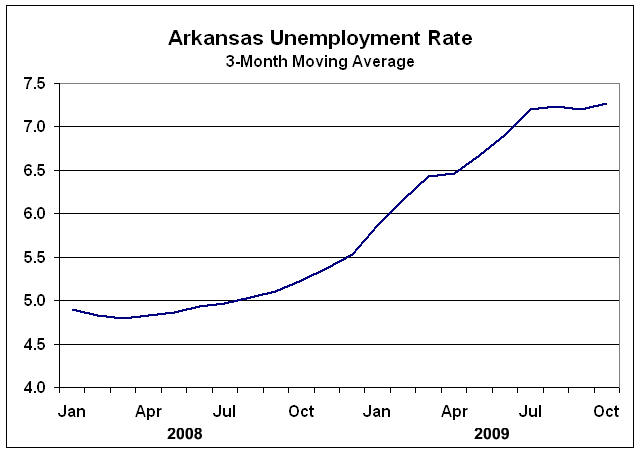 The data on employment in Arkansas has been similarly volatile. In a post last month, I noted that the household survey and payroll survey were providing mixed signals about employment in September. The household survey showed a gain of 8400 jobs, while the payroll survey showed a decline of 7700 jobs. In the latest report, the September employment figure was revised upward, reducing the August-September job loss to 5300. For October, payroll employment was up by 4200 jobs, resulting in a net loss of only 1100 jobs over the two month period. Meanwhile, the household survey for September was revised upward (now showing an increase of nearly 8600 jobs), while the newly-released number for October showed a decline of 4100 jobs.

The chart below puts some of these monthly changes into context. Both measures of employment showed sharp declines from about October 2008 until March 2009. While falling slightly since then, Arkansas employment has evidently stabilized. We continue to see month-to-month movement in both series (some of which is smoothed out by considering a simple average of the two), but no significant upward or downward trend is discernable. 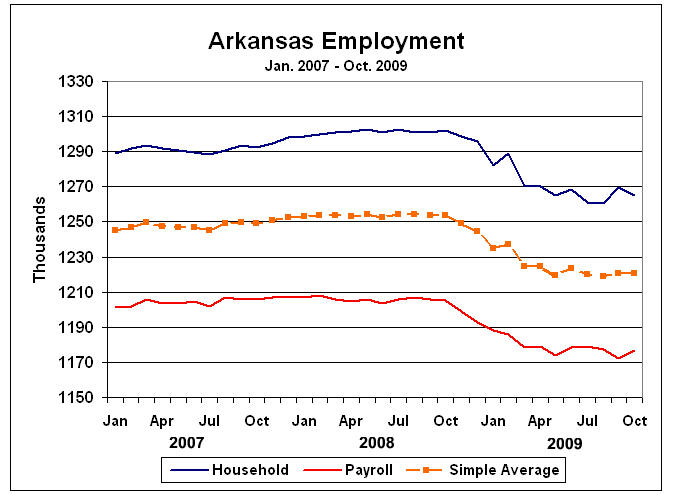 October’s increase in the unemployment rate will surely generate alarmist headlines, but overall the October employment report shows a continuation of the labor market performance we’ve been observing since spring: sluggish but not deteriorating.