Data on existing home sales in Arkansas are available from both the National Association of Realtors® (NAR) and the Arkansas Realtors® Association (ARA).

Last week (on November 10), the NAR released its quarterly report on state-level existing home sales. The report showed that the markets are improving in most areas of the country, with 45 states and the District of Columbia showing sales increases in the third quarter relative to the second quarter (seasonally adjusted). Arkansas was one of the states showing an increase, up 2.7%. This was the third consecutive increase for Arkansas home sales, following a 4.2% rise in the second quarter and a 3.6% increase in the first quarter. The magnitudes of the quarterly gains are relatively modest compared to some other states, but Arkansas was one of only 6 states to experience sales increases over all three quarters.

Although these data are indicative of the performance of the Arkansas market relative to other parts of the country, they do not necessarily represent the most accurate assessment of market conditions for the state. According to the the NAR’s own description of its methodology, the monthly survey covers only about 30-40% of all existing home sale transactions. The sample data are used to construct aggregates for the four census regions of the U.S., then the State data are derived from those totals.

Indeed, according to Ethan Nobles of the ARA, it is his understanding that the NAR survey excludes some of the important local markets in Arkansas. The ARA releases its own monthly summary of home sales, consisting of the total number of homes sold by Realtors® across the state. The data are subject to some revision as late reports come in, but they represent (as best as possible) a full accounting of the number of homes sold in the state.

The most recent report from the ARA came out earlier this week (November 16). It shows that home sales were up in September over the previous year. This was the second month in the past three that showed a year-over-year increase. The data, shown in the chart below, suggest that home sales in Arkansas have been on a recovery path throughout 2009. 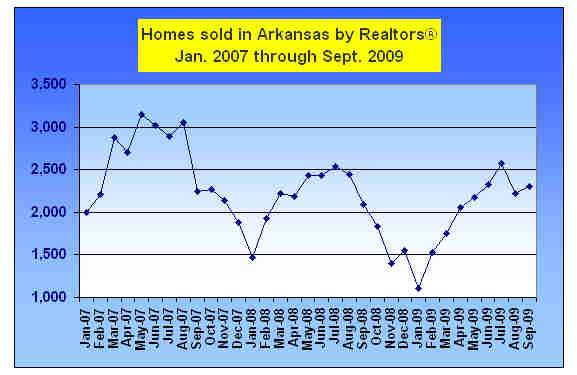 However, it is also evident from the chart that there is a pronounced seasonal pattern in the data. Home sales tend to be lower during the winter months, and higher during the spring and summer. This makes it difficult to discern trends over periods less than a year in length. And in particular, it is hard to tell how much of the increase since January 2009 represents actual growth as opposed to regular seasonal movement.

With a longer data series, it would be possible to apply standard statistical techniques directly to the data. In the absense of a long time-series, however, more rudimentary techniques can suffice: The NAR’s monthly report on existing home sales provides estimates of both seasonally-adjusted and not-seasonally-adjusted estimates for the U.S. and the four census regions, over the past 12 months. The ratio of these two sets of estimates provide implicit seasonal factors, as calculated by the NAR (using a census X-11 procedure).

Applying the implicit seasonal factors for the Census South Region to the data for Arkansas from the ARA, we obtain a rough estimate of seasonally-adjusted Arkansas sales. The chart below illustrates the result of this procedure, with the data multiplied by 12 (so they present annualized measures), and averaged over quarters (to smooth out month-to-month variability). 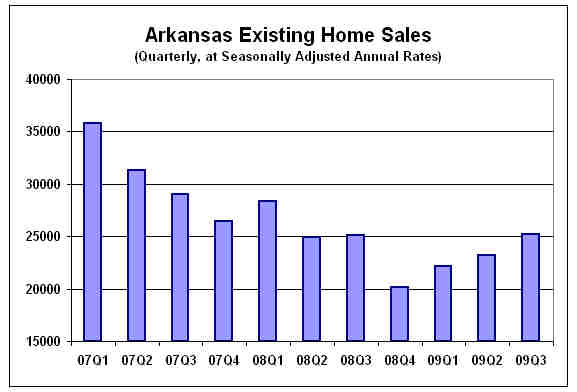 It is clear from this chart that home sales in Arkansas were sliding downward before and during the first part of the recession, then dropped sharply in the fourth quarter of 2008. Since then, sales have steadily increased. This confirms the pattern observed in the NAR data suggesting that residential real estate markets in Arkansas have been consistently improving since the beginning of the year.