The December 2009 report on Arkansas employment and unemployment was released this morning by the Bureau of Labor Statistics.

The household survey showed a record number of unemployed in Arkansas — 105,408.  That represents about 3500 more unemployed Arkansans in December than there were in November.  The survey also showed that the number of employed declined by 10,550 from November to December (although this decline follows an increase of 10,175 in November).   The unemployment rate rose from 7.4 percent to 7.7 percent.  This is the highest unemployment rate for Arkansas since June 1988. 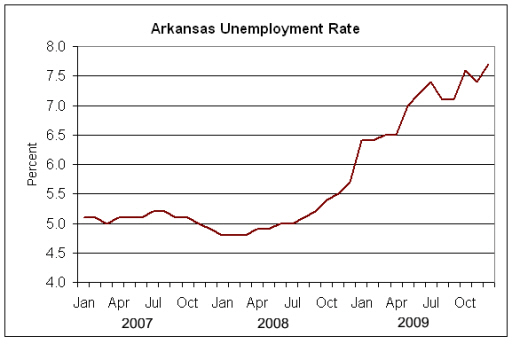 The payroll survey provided similarly disapointing news.  The number of workers on nonfarm payrolls declined by 3400 in December (seasonally adjusted).  Losses were largest in Trade, Transportation and Utilities (-2200) and Profesional and Business Services (-1900).  Some sectors experienced increases in employment:  for example, Manufacturing employment increased by 1000, jobs in Financial Services were up by 900, and the number of Education and Health workers rose by 800.  The table below summarizes employment changes by sector over the past six months. 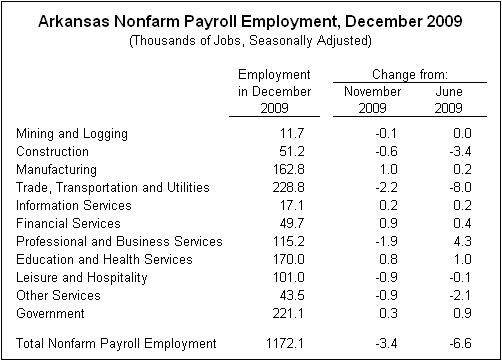 As described in a previous post, the next release of payroll data will include annual benchmark revisions, reflecting more complete information collected in the BLS’s Quarterly Census of Employment and Wages (QCEW).  Based on the most recent information available, the benchmark revisions will show much larger job losses in Arkansas than were previously reported (particularly in 2009Q2).  The table below reports projected revisions to the payroll data, extended through the end of 2009: 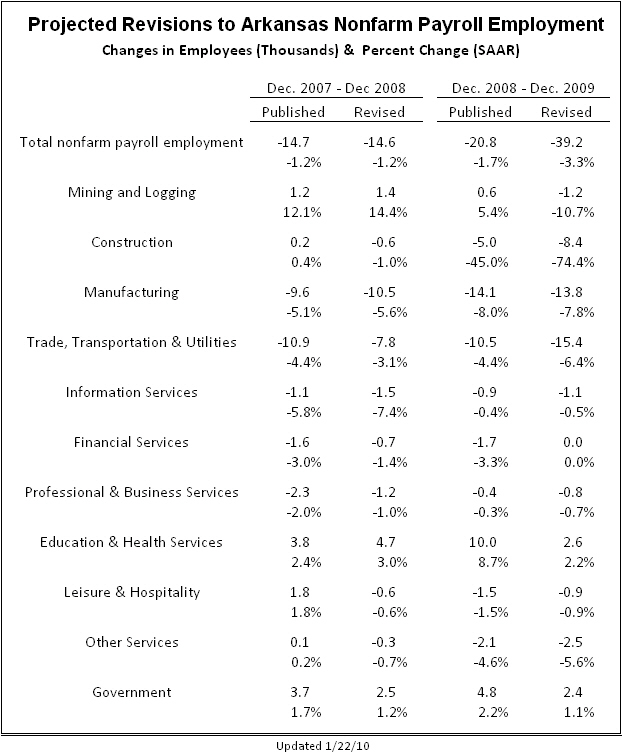 Repeating a cationary note from the previous post :  The actual benchmark revisions to be released by the BLS on March 10 will be calculated using far more detailed methods and more up-to-date information.   Nevertheless, the revisions are likely to be of the general magnitude presented here.