Forecasting a Revision of History

“The bottom line:  Arkansas has lost 18,000 more jobs since the start of the recession than were previously recorded.”

In the business of monitoring and forecasting economic conditions, data revisions sometimes require tedious attention to detail and usually lead to only subtle changes in perspective.  At other times, revised data can dramatically alter our view of the world.  New data released by the Bureau of Labor Statistics (BLS) earlier this week fall into the latter category.  They  indicate that upcoming revisions to Arkansas employment statistics will reveal significant changes:  The employment situation in our state  is far worse than recent data have been leading us to believe.

Month-to-month changes in payroll employment—as regularly reported in the media and here on the pages of the Arkansas Economist—come from the BLS’s Current Employment Statistics (CES) program.  According the the BLS, the CES surveys “about 150,000 businesses and government agencies, representing approximately 390,000 individual worksites.”  This sample is used to produce employment estimates for the nation, the states, and metropolitan statistical areas.  It is one of the most timely and accurate measure of economic activity that is available—especially on the regional and local levels.  Nevertheless, it is a survey—subject to sampling error and unmeasured changes in the structure of of the labor market.  Specifically, the CES must use estimates of the number of establishments in a given state or metro area.  During times when there are many business entrances or exits from the market, these estimates can be off the mark.

To improve the accuracy of the statistics compiled by the CES program, the BLS also calculates a Quarterly Census of Employment and Wages (QCEW).  This is the report that came out earlier this week.

The QCEW is a comrehensive and detailed account of employment, disaggregated by sectors and by counties.  It is constructed from state unemployment insurance records, so it constitutes a full accounting of all covered jobs in the nation.  Because of it’s comprehensive coverage, the QCEW provides a more accurate picture of employment than the CES.

However, data for the QCEW take longer to compile.   This week’s “new” data cover the period April-June 2009.  Old news.  But this more comprehensive measure will soon be used to “benchmark” the data from the CES.  On March 10, the BLS will release revisions to the CES payroll employment figures, based on the new data from the QCEW.

For Arkansas, the QCEW showed that employment declined sharply during the first six months of 2009–down by approximately 33 thousand jobs.  In contrast, the monthly payroll employment reports from the CES have been suggesting that Arkansas employment began to stabilize in March (as reported in the Arkansas Economist here and here, for example).  We can be confident that the revisions will show sharply larger job-losses in early 2009 than are presently shown in the CES payroll data.

Rather than wait until March 10th, I have calculated  estimates for benchmarked CES payroll employment data—an exercise in forecasting an upcoming revision of history.  The results of this exercise are summarized in the figure below: 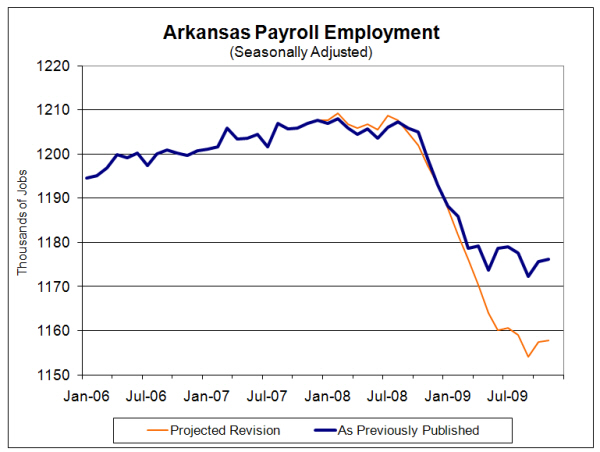 Sources: Bureau of Labor Statistics and Institute for Economic Advancement

The projected benchmark series is calculated using some simple statistical procedures to estimate the  correspondence between the two measures in the past (Jan. 2001-Dec. 2007) and to forecast that relationship in the more recent past (Jan. 2008-June 2009).  For July 2009 through November 2009 (the most recent month availabile for the CES payroll data), month-to-month percent changes are used to extrapolate these estimates [see technical notes].

The projected revised data far sharply below current CES estimates during the first half of 2009, lowering the estimated level of employment in Arkansas for the second half of the year.  The bottom line:  Arkansas has lost 18,000 more jobs since the start of the recession than were previously recorded.

Investigating in more detail, I also estimated revisions to major sectoral categories of the data.  The results of this exercise, summarized in the table below, reveal that some sectors fared better according to the revised statistics (especially in the earlier stages of the recession, during 2008), but most fared worse (especially during 2009).   Overall, Arkansas lost slightly fewer jobs in 2008 than previously recorded, but lost far more in 2009. 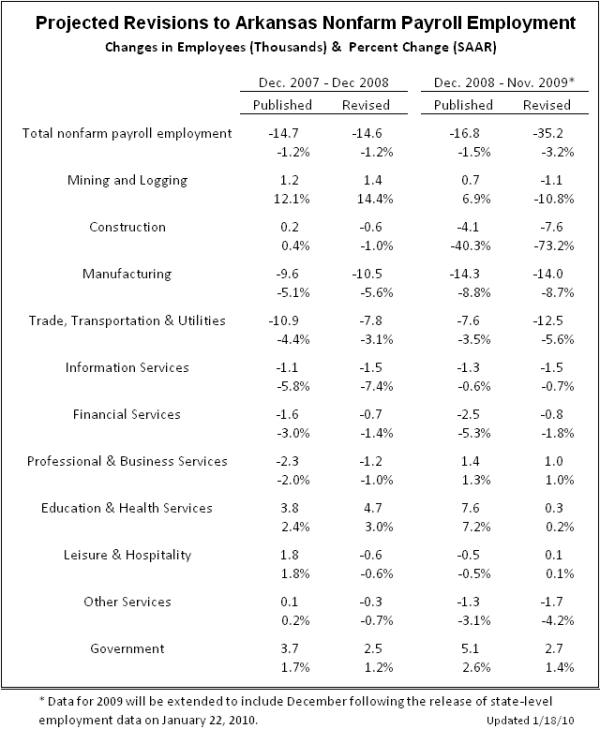 The estimates presented here may not line up precisely with the benchmarked data to be released on March 10.  The BLS will use more detailed methods and up-to-date information to perform the actual benchmarking procedure.  Nevertheless, given the size of the discrepancy between current CES survey data and the available QCEW population data, the revisions are likely to be of this general magnitude.

Although the revisions will reveal a sharply larger employment decline in Arkansas, it remains true that the state has fared better than the nation as a whole.  The benchmarking process is expected to lower employment estimates for the total U.S. , leaving Arkansas in roughly the same relative position.