Another Round of State Budget Cuts

Governor Beebe announced another round of state budget cuts this morning.  The cutbacks total $106 million of spending, amounting to about 2.4% of the state’s budget.  Today’s announcment followed last week’s report from the Department of Finance and Administration (DF&A) that showed state revenues continuing to fall short of expectations.

For the first six months of the 2010 fiscal year (July-December 2009),  gross general revenues were down $80 million– about 3 percent–from the previous year.  More important, gross revenues were 1.9 percent below DF&A’s forecast.  As shown in the chart below, gross revenue has shown some signs of a comeback in recent months.  However, the rebound is not as large as was anticipated in the state’s revenue forcast (as revised in October 2009). 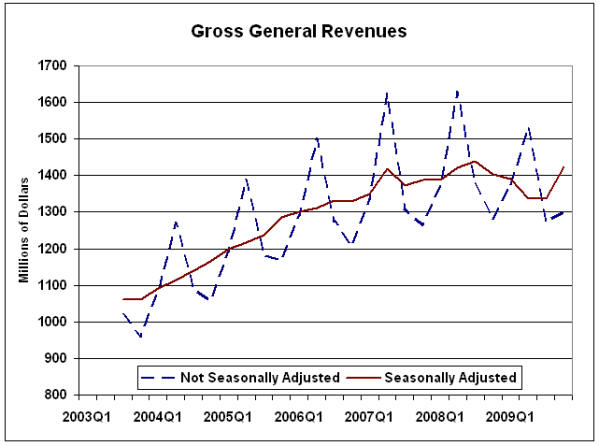 Source: Arkansas Deparment of Finance and Administration. Seasonal adjustment by the Institute for Economic Advancement

Gross General Revenues measure the total income for the state.  A more important measure for the budget is known as Net Available Revenues, which is equal to gross revenues minus some specific budgetary obligations (including tax refunds, bond payments, earmarked education funds, etc.).   Net available revenues measure the resources that are available for funding ongoing state government operations.  According to the DF&A report last week, net revenues for the first half of FY2010 were $37.7 million (1.7 percent) lower than in the previous year, and were 2.4 percent lower than the DF&A revised forecast.