Last week, the Bureau of Labor Statistics (BLS) announced its estimates for employment and unemployment in the nation’s Metropolitan Statistical Areas (MSAs) for December 2009.

Unemployment rates for Arkansas MSAs were changed little from the previous month (seasonally adjusted).   As shown in the table below, the unemployment rate declined slightly in Fort Smith, rose slightly in Little Rock and Texarkana, and was unchanged in the state’s other MSAs. 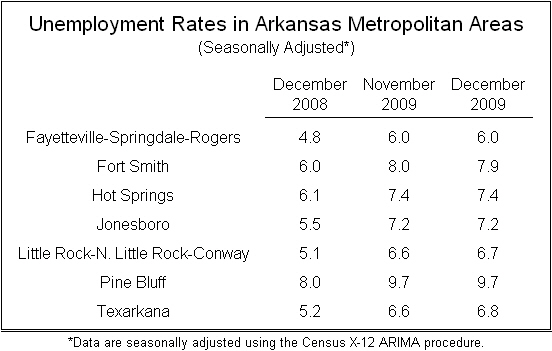 The December payroll employment statistics–compiled from a separate suvey–indicate a similar pattern.  From the previous month, job losses were recorded in all MSAs except Fort Smith (where employment was unchanged).  Over the last six months of 2009, employment declines ranged from 0.1 percent (Fort Smith and Texarkana) to 3.7 percent (Hot Springs). 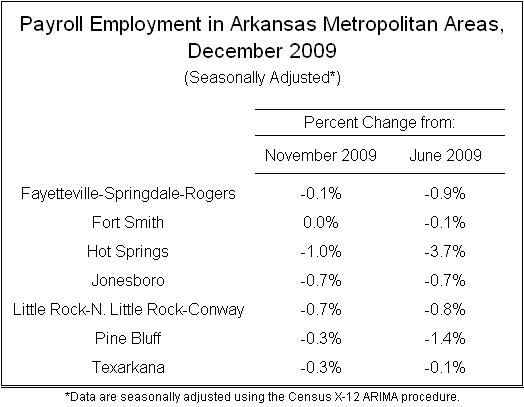 The next BLS release of payroll employment data will incorporate annual benchmark revisions.  As described in a previous article, these revisions are expected to show sharper job losses during the second quarter of 2009 than shown in the current data.  The table below illustrates the expected magnitude of the downward revisions for Arkansas’ MSAs, expressed as cumulative employment declines since the onset of the recession in December 2007. 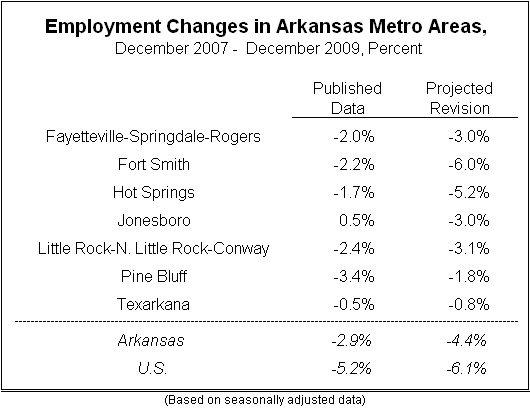 For most of Arkansas’ MSAs, the revisions are expected to be substantial.  Larger job losses are likely to be recorded for all MSAs except Pine Bluff, and in many cases the revised employment declines will be more than twice as large as the currently published statistics suggest.    In some sense, the data revisions reflect “old news:” the changes primarily reflect the evaluation of labor market conditions in the spring of 2009.  Nevertheless, the new data will change our perspective on where we presently stand and will have implications for the employment outlook in Arkansas’ MSAs as the economic recovery proceeds.