Despite their differing methodology and coverage, the two sources of information about the Arkansas real estate market reveal the same pattern:  Sales volumes declined steadily during 2007 and 2008, reaching a low point in the fourth quarter of 2008.  During 2009, however, sales showed steady improvement.

The chart below illustrates these patterns.  It shows both the NAR and ARA measures of home sales  expressed in directly comparable forms — as indexes normalized to equal one in 2007.*  The chart shows that in sales in the fourth quarter of 2008 had fallen by nearly one-third from the average volume of 2007.  After steady increases during 2009 (seasonally adjusted), sales in the fourth quarter of 2009 were back up to well over 80 percent of their 2007 pace.

The outlook for Arkansas’ housing market is generally good.  There may be brief sales downturns associated with the expiration of home-buyer tax incentives later this year and with inevitable increases in mortgage rates as economic expansion picks up pace.  Nevertheless, the steady increase in sales during 2009 suggests that the residential real estate market in Arkansas is well on its way to recovery. 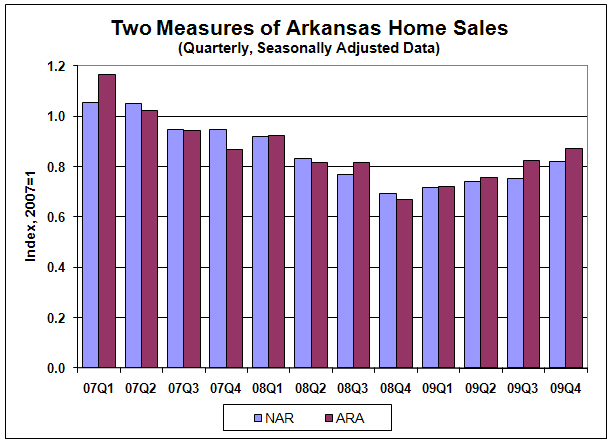