Data covering the end of 2009 continue to roll in.  This week, we received new information about home prices from two independent sources.

First, the  celebrated S&P/Case-Shiller index was released on February 23,  showing that home prices nationwide were up 1.1 percent in the fourth quarter (seasonally adjusted), following a 3.3 percent decline in the third quarter.  Over the past four quarters, the Case-Shiller nationwide index registered a decline of 2.5 percent.

While the Case-Shiller index is a good measure of home values nationwide and particularly in the nation’s largest metropolitan areas, its component indices contain no specific information about Arkansas.  An alternative is the similarly-constructed set of house price indices produced by the Federal Housing Finance Agency (FHFA).  The latest set of estimates from this source was released yesterday (February 25).  The FHFA’s purchase-only index (comparable Case-Shiller) showed that  house prices nationwide were basically flat in the second half of 2009 (up 0.1 percent in the third quarter and down 0.1 percent in the fourth).  For the year, this measure showed house prices down 1.2 percent.

For Arkansas, the FHFA sales only index showed an increase of 0.5 percent in the fourth quarter, and realtive to a year earlier, house prices were up by 1.5 percent.  As shown in the chart below, this continues a clear pattern: During the period of rapid price appreciation in the first half of the decade, Arkansas home prices grew more slowly than the nationwide average.  Since 2007,  price changes in Arkansas have been similarly muted — we haven’t seen the sharp declines that have been evident in other parts of the country. 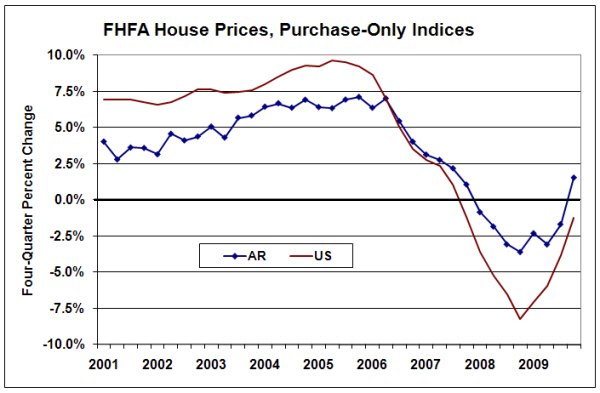 The FHFA also produces an alternative “all-transactions” index that includes appraisals from refinancings in addition to sales-price data.  By this measure, house prices have recently shown more weakness, with prices down 1.9 percent in Arkansas and down 4.7 percent nationwide (from 2008Q4 to 2009Q4).   Note that Arkansas home prices have remained more stable than those in the rest of the country, using either measure.

Whether the purchase-only or all-transactions index is a better measure of home values in general is an open question.  [See Comment:  Differences Among Home-Price Indices]  But by adding data observations from refinancing appraisals, the FHFA is able to construct indexes for smaller geographic areas, including all of the nations Metropolitan Statistical Areas (MSAs).  The table below shows how  home prices in Arkansas’ MSAs fared during 2009, in comparison to recent years.

Home prices fell in most of Arkansas MSAs in 2009, but the declines were generally smaller than the U.S. average.  The only exception was in the Northwest Arkansas, where prices have followed a pattern similar to the nationwide average over the past few years.  Home prices were also down sharply in Hot Springs in 2009, but that figure represents the first annual decline after a series of fairly large increases.  Falling house prices in Little Rock and Pine Bluff also represented the first annual declines in the past five years.   Jonesboro and Texarkana both experienced modest house-price increases in 2009, and the data show continued strong appreciation in Fort Smith.

In some metro areas around the country–including many of those included in the Case-Shiller index–home prices have fallen sharply over the past two to three years following a period of exorbitant price increases.  The FHFA data show considerably more stability in Arkansas, with price declines in 2009 representing only a modest departure from the trend of steady appreciation over time.