Next week we will see revised data for Arkansas payroll employment.  Meanwhile, the Bureau of Labor Statistics has already released new, revised data for household employment and unemployment–including the unemployment rate.  This revision is more substantial than the routine annual re-estimation process, representing the implementation of a “new generation of time-series models.”  For Arkansas, the data revisions smooth out some of the puzzling fluctuations in employment and labor force over the past couple of years, while maintaining some of the overall trends that were apparent in the previously published data. 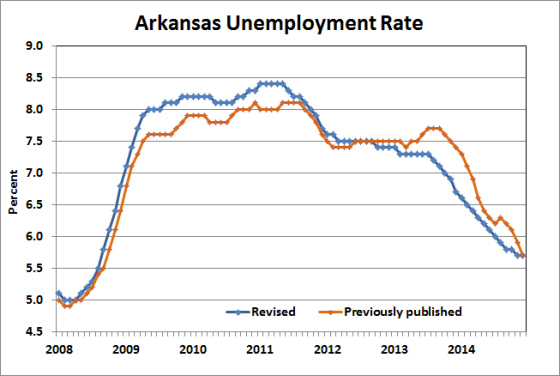 The revisions to the unemployment rate are based on revised estimates of employment, unemployment, and labor force.  Over the past few months, the employment and labor force statistics have shown unusually large and somewhat inexplicable fluctuations.  As shown in the next set of charts, much of that volatility was revised away.  What remains is a gradual decline in employment running from the end of 2011 through late 2013, followed by a period of recovery during 2014.  The nearly two-year decline in employment totaled nearly 50,000 workers, with the subsequent recovery adding back about 30,000 by the end of 2014.  A similar pattern of revisions affect the labor force estimates.  On the number of unemployed, the revised data show more unemployed workers than previously estimated in 2010 and 2011, but with a larger and more persistent decline in 2013 and 2014. 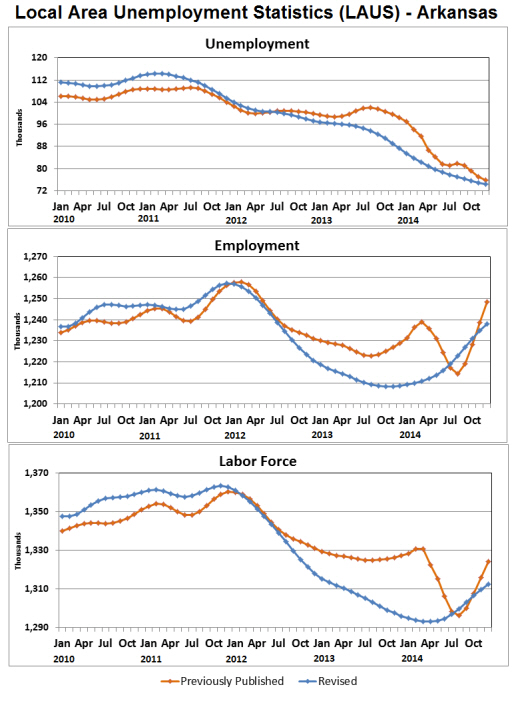 Before the revision, the data were showing that Arkansas’ unemployment rate moved above the U.S. average during 2013 and remained persistently higher throughout 2014 (see here, for example).  With the more monotonic downward path for unemployment in the revised statistics, Arkansas’ rate has more closely tracked the national average.  As of December 2014, the unemployment rate for Arkansas was 5.7% — one tenth of a percentage higher than the national rate. 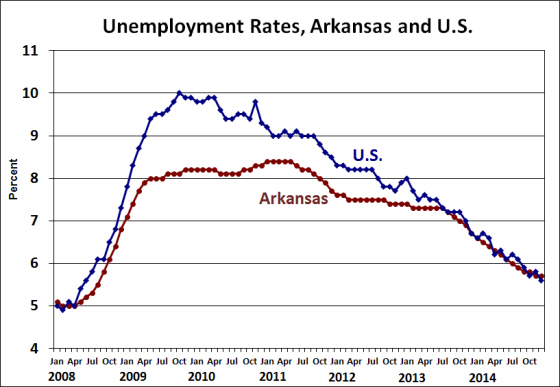