With the data revisions for 2014 complete, the Bureau of Labor Statistics published the first state-level employment data for 2015.  From the household survey, the unemployment rate ticked down one-tenth of a percent to 5.6%.  As described in a previous post, some of the recent sharp swings in the household employment data were recently muted by data revisions.  But the January data showed an uncharacteristically large surge in employment, similar to those that were showing up in the recent data before revision:  From December to January, the number of employed was up by more than 9,000.   The number of unemployed was essentially unchanged, so the labor force figures also showed a sharp increase. 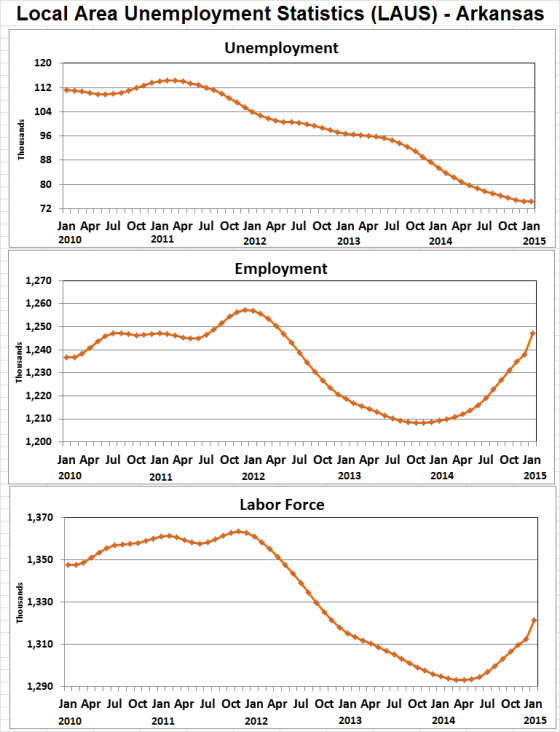 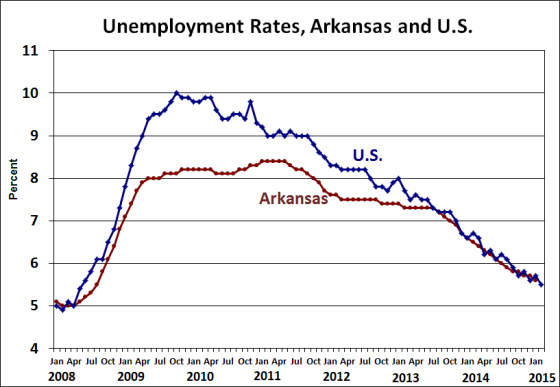 Payroll Survey
The payroll data are similarly showing generally positive trends.  The not-seasonally adjusted data reported by the Arkansas Department of Workforce Services showed a sharp decline for the month, but that is typical of the change from December to January as the demand for holiday-related workers wanes.  After taking account of typical seasonal fluctuations, the seasonally-adjusted data showed an increase in Arkansas Nonfarm Payroll Employment of 2,000 jobs.  In the goods producing sectors, Manufacturing employment was down 1,800 but Construction employment was up 2,300.  Changes were mixed across service sectors:  Employment in Professional and business services was up for the month; Leisure and Hospitality employment was down slightly. 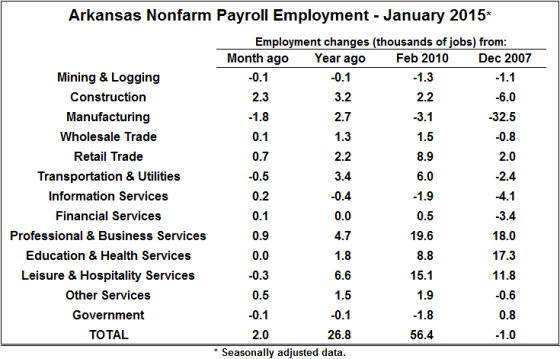 Today’s release of Nonfarm Payroll Employment Data incorporated the annual benchmark revisions (more on that below).  In the context of the revised data, the year-over-year growth of Arkansas employment amounts to 26,800.  Gains were widespread, with only slight declines in Mining, Information Services and Government employment.  Since the employment trough of February 2010, the Arkansas economy has recovered 56,400 of the jobs that were lost during the recession.  The composition of employment in Arkansas has changed considerably over the past seven years:  Manufacturing employment has contracted by over 32,000 jobs, while job growth has been concentrated in service sectors. 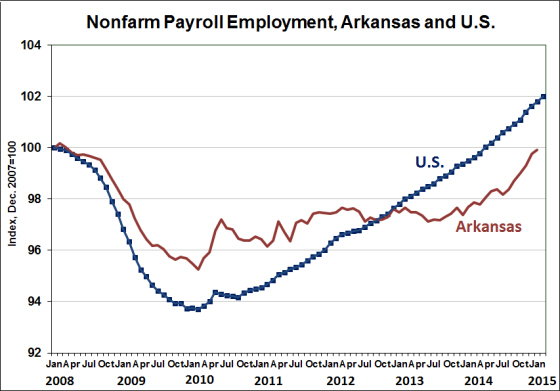 Benchmark Revisions
The revisions to payroll employment data were about as expected:  The job growth in the latter part of 2013 that had been previously reported was largely revised away.  However, the new data show stronger growth in the first part of 2014 than the previously-published data.  As a result, revisions to recent statistics were relatively minor.  As of December, the revised data show only 3,100 fewer jobs than the pre-revision statistics. 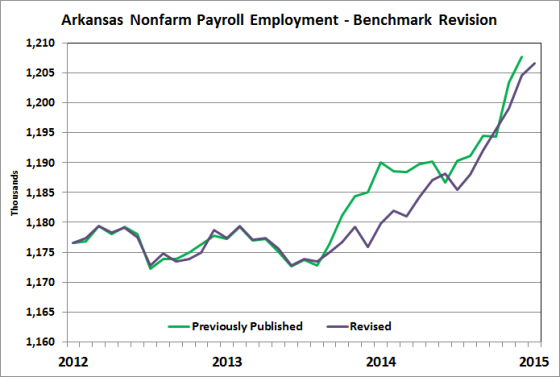 The table below summarizes the impact of the revision on various sectors.  Because the data for late 2013 were revised downward far more than the data for end of 2014, year-over-year growth in total employment is considerably stronger in the revised data.  This basically reflects the re-estimation of the timing of job growth:  More of the recent growth is now estimated to have taken place in 2014 instead of earlier.  The revisions to various sectors are mixed.  Levels of employment were revised downward for Construction, Wholesale Trade, Education and Health Services, Leisure and Hospitality Services and Government.  But again, the change in the estimated timing of job growth matters for the growth rates of the sectors.  The revised data generally show slower growth over the past year for goods-producing sectors, as well as for Education and Health Services.  The higher growth rate in total job growth is reflected in most of the other service sectors. 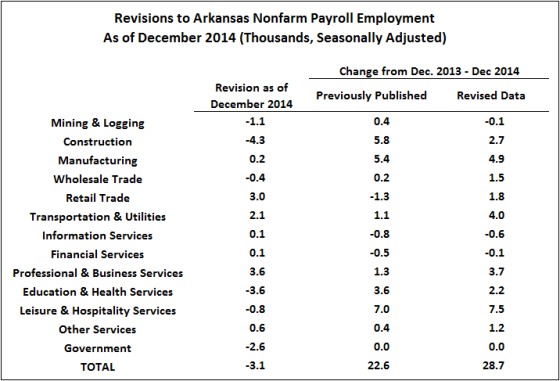