The Bureau of Labor Statistics (BLS) won’t release its summary of metro area employment data until this Friday (March 22), but the annual revisions to payroll employment data have been available since the revised state-level data came out on Monday. The table below summarizes the magnitude of the data revisions and their impact on year-over-year growth rates for Arkansas’ metro areas.   The revised data result in higher measured levels of employment in most of the metro areas, with the only downward revisions being Pine Bluff and Texarkana.

In some cases, the level of 2012:Q4 employment was revised upward but the annual growth rate ended up lower.  Jonesboro is a prominent example.  The explanation for this phenomenon is that upward revisions to employment data for 2011:Q4 were even larger than the upward revisions for the end of 2012.  The set of figures below illustrates this pattern with particular clarity in the Jonesboro case.  Another interesting case is Fort Smith, which experienced the largest proportionate revision to the level of measured employment, but with little effect on its annual growth rate because the revision affected levels of employment for the entire year. 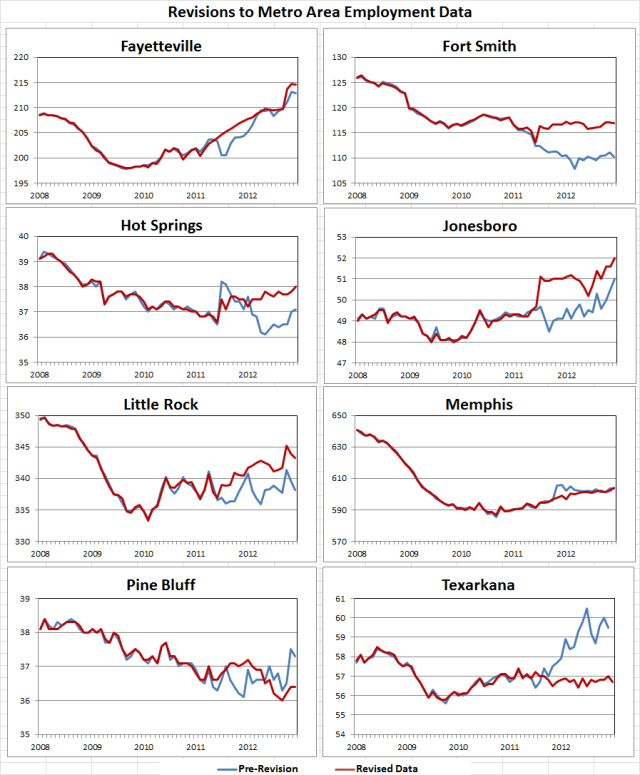 A comparison of the actual data revisions with the expected revisions previously posted on Arkansas Economist reveals some notable differences.  For example, the expectation was for Fayetteville to experience a downward revision, when the actual revision was positive.  Data for Little Rock were expected to show little change, but the actual revision was fairly substantial.  There are two explanations for these forecast errors.  First, the data for metro areas are fundamentally more volatile than the state level data, making them more difficult to predict.  Idiosyncratic local circumstances can contribute to sharp swings in the metro area data that end up being netted-out in state-level and national data.

More important, the BEA updated its methodology for benchmark revisions this year, incorporating more up-to-date readings from the Quarterly Census of Employment and Wages (QCEW).  In particular, the BLS used QCEW data through September 2013 for this year’s revisions.  Our “forecasted revision of history” would have been more accurate if we had used QCEW data for the second quarter, but we still would have missed the information from the third quarter data (which are not yet publicly available).  Although the updated methodology makes it more difficult to anticipate the nature and magnitude of upcoming data revisions, the good news is that the revised data are now more accurate and up-to-date than they have been in the past.  This should reduce the impact of future benchmark revisions, making the annual benchmarking process less significant in evaluating recent trends.