The Bureau of Labor Statistics (BLS) announced new data on metro area employment and unemployment this morning. The BLS news release noted that unemployment rates were lower in January 2013 than a year earlier in 227 of the nation’s 372 metropolitan areas.  Most of Arkansas’ Metropolitan Statistical Areas (MSAs) fall into this category, with the exception of Memphis and Pine Bluff.  The largest year-over-year declines were in Fayetteville (-0.4%), Jonesboro (-0.3%), and Texarkana (-0.3%). 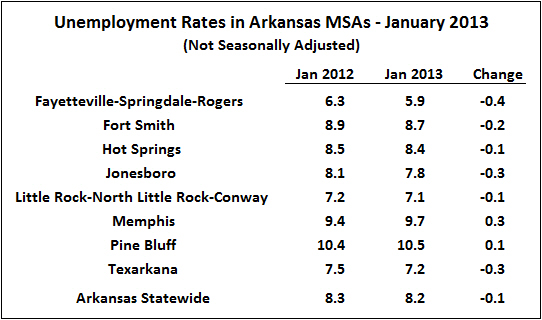 A look at the month-to-month changes in unemployment rates around the state might appear as cause for alarm.  As shown in the table below, unemployment rates were up sharply, with increases ranging from +0.6% in Fort Smith to +1.5% in Pine Bluff and Texarkana.

However, the primary explanation for these large increases is seasonal variation.  With the end of the holiday shopping season, cold weather suppressing construction activity, and many public schools still on winter break, unemployment always rises in January.  Indeed, the not-seasonally-adjusted numbers for statewide unemployment show an increase of more than a full percentage point in January — in contrast to the +0.1% (seasonally adjusted) that was headlined earlier this week. 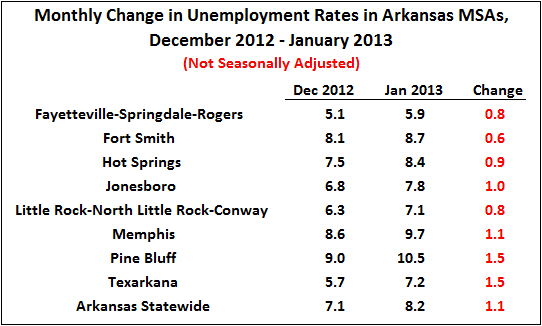 These recurring swings in unemployment are interesting illustration of the seasonal cycle, but they can get in the way of evaluating labor market conditions relative to the business cycle.  That is, if we are interested in evaluating the recovery of labor markets from the last recession, seasonal components can give misleading signals when comparing monthly changes in not-seasonally-adjusted data. 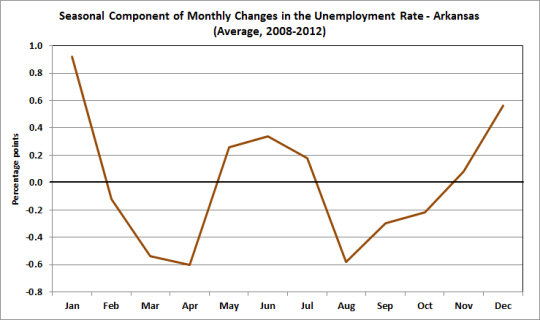 The value of seasonal adjustment is that it removes the seasonal component leaving only the cyclical component (ideally, at least).  Although national and state unemployment rates are routinely released in seasonally-adjusted form, the metro area data are not — at least not in the “headline” news release.  However, the BLS does publish Smoothed Seasonally Adjusted Estimates, which are summarized for Arkansas’ metro areas for January 2013 in the table below. 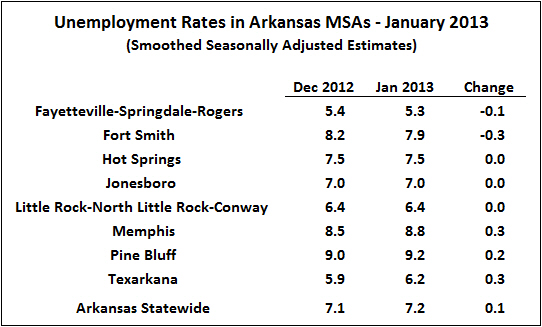 These statistics are far from perfect, and one should never put too much emphasis on data for a single month.  Nevertheless, they provide better information on the cyclical state of labor markets in Arkansas (i.e., how they are recovering relative to the last recession) than the not-seasonally adjusted estimates.

Payroll Employment
The annual benchmark revisions to the metro area payroll employment statistics were described in a previous post.  The table below summarizes the newly-revised data for January 2013.  From December to January, payroll employment was up in Fayetteville, Fort Smith, Hot Springs and Jonesboro.  Declines were registered for Little Rock, Memphis, Pine Bluff, and Texarkana.

Compared to January 2011, employment is higher or essentially unchanged in all of Arkansas’ metro areas except Pine Bluff.  Pine Bluff is also the only metro area that has experienced an ongoing contraction since the statewide employment trough of February 2010.  With the newly-revised data, only Fayetteville and Jonesboro have employment levels higher than before the onset of the last recession (December 2007). 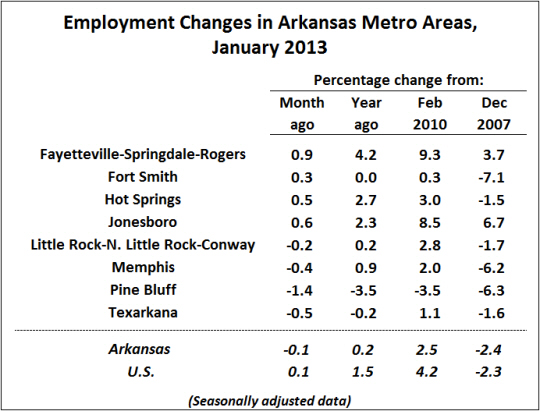