The Bureau of Economic Analysis released new data on state personal income this morning.  In Arkansas, personal income rose by 2.2% for the quarter, compared to a 1.9% growth rate nationwide.  Arkansas’ growth rate for the quarter was the 12th highest in the nation.  Data for the third quarter were revised downward, but growth for the entire year remained relatively strong at 4.9% (Q4/Q4).

As shown in the figure below, personal incomes in Arkansas have risen to a level that is 9.3% higher than the previous cyclical peak (in 2008:Q2).  By comparison, U.S. personal income is 8.3% higher over the same period.  These figures do not include the effects of inflation, however.  After accounting for price increases of approximately 6.7% over the period (as measured by the price index for personal consumption expenditures), real personal income is up 2.4% in Arkansas and 1.9% for the U.S. 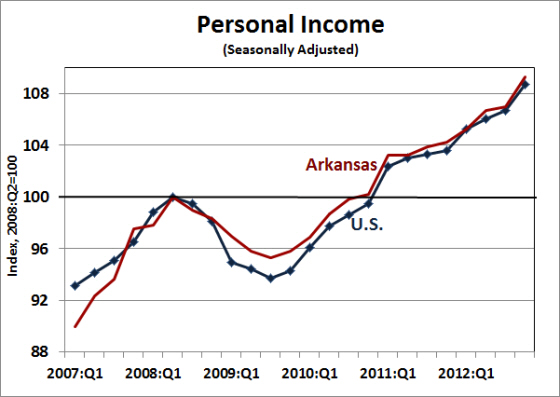 The press release noted particularly strong growth in the fourth quarter, citing special and accelerated dividend payments that were associated with end-of-year expectations for higher income tax rates in 2013.  The report also cited accelerated bonus payments and other irregular pay in anticipation of tax rate changes.  These effects had their largest impacts on states where the finance industry is particularly prominent.

The BEA report also noted the impact of severe heat and drought on agricultural production and income in the summer and fall of 2012.  Although the impact of these weather-related effects were fairly large and negative for states in the upper Midwest and great plains states, the impact on farm incomes in Arkansas was positive.  Record crop yields and high prices combined to boost Arkansas farm incomes by 44% over their levels in the fourth quarter of 2011.

The table below compares annual growth rates in total personal earnings for Arkansas and the U.S.  For the year in total, earnings growth was 2.6% in Arkansas, compared to 3.3% for the U.S.  Sectors generating large income gains included Farming, Utilities, and Management of companies.  Industries in which Arkansas earnings growth lagged the nation included Mining, Nondurable goods manufacturing, and Finance and Insurance. 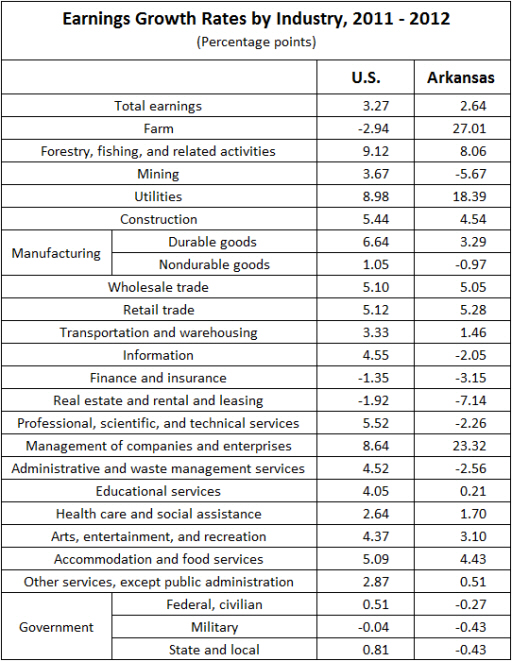 With data now available for the year as a whole, today’s report also highlighted new measures of per-capita income in 2012.  Per capita personal income in Arkansas was estimated at $34,723 — about 81% of the national average ($42,693).  This ranked Arkansas #45 among the 50 states.  As noted in a previous post, the real purchasing power of incomes are affected by regional differences in the cost of living.  Updated estimates of regional price parities will come out later this summer (scheduled for June 12).  For now, using the 2006-2010 estimates of regional price differences, price-adjusted per capita income in Arkansas amounted to 91% of the national average in 2012, moving the state up to #41 in the rankings (not including D.C.)