New and revised data for state employment and unemployment were released today by the Bureau of Labor Statistics and Department of Workforce Services.

For January, the household survey (a.k.a. Local Area Unemployment Statistics) featured an uptick in the unemployment rate to 7.2% (up from December’s 7.1% rate).  The number of people employed was down by 4,055 while the number employed increased by 760.  Consequently, the labor force declined by nearly 3,300.  The unemployment statistics were recently revised, reducing the magnitude of some recent fluctuations in Arkansas’ unemployment rate.  The revised data show that the rate peaked at 8.0% (instead of 8.2%), and the decline from July 2011 through April 2012 amounted to only 0.7% (instead of 1.0%).  The rate for December 2012 was unrevised at 7.1%.  The uptick in January’s unemployment rate mirrors the 0.1% increase that was previously reported for the U.S. average. 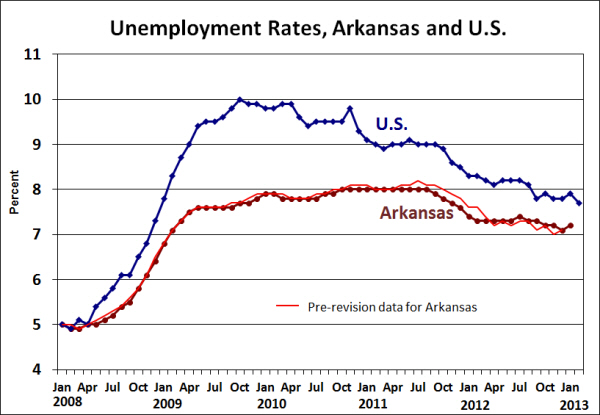 The employment contraction was smaller after seasonal adjustment, but it was still a decline.  Even considering seasonal patterns, construction employment was down 2,300.  Notable declines were also reported for Wholesale Trade, Transportation & Utilities, Professional & Business Services, and Government. 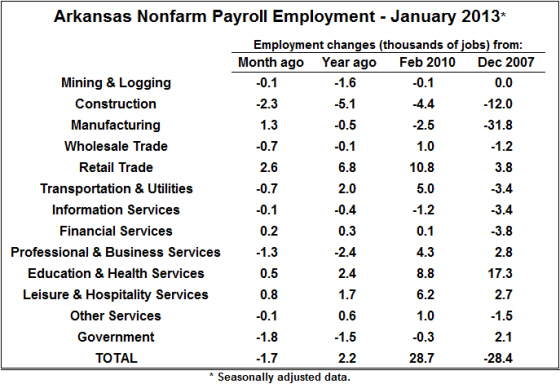 Benchmark Revisions:
The release of the January report was delayed by the annual “Benchmark Revision” process for payroll employment data.  The benchmarking involves a re-calibration of the monthly payroll employment series to be consistent with the more detailed Quarterly Census of Employment and Wages (QCEW).  We had expected the benchmarking process to result in a significant upward revision in the Arkansas payroll data, and it did.  The revisions to data for 2011 were particularly large.  For the period July through December 2011, the average monthly revision was +17,300.  This year, the BLS extended the period subject to benchmark revision to include the second and third quarters of 2012.  This resulted in lower job growth during 2012 than previously reported, but the increases in 2011 left the level of employment substantially higher than the earlier data had suggested.  In addition to the benchmark revision itself, the data were also subject to revised seasonal factors.

In total, the revisions amounted to an increase in payroll employment of 11,900 more than previously estimated for December 2012.     The newly revised data now show that Arkansas payroll employment expanded by 28,700 from February 2010 through January 2013 — a recovery of approximately one-half of the total job losses experienced during the employment contraction of December 2007 through February 2010 (see table above). 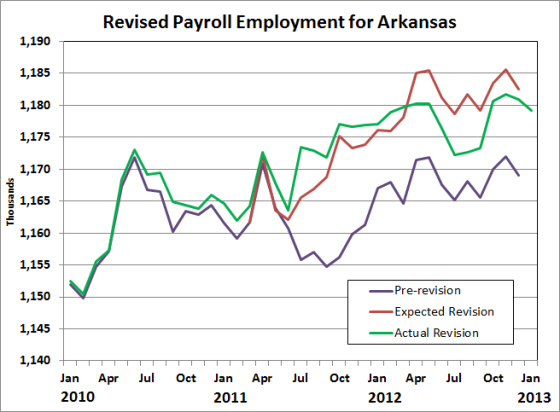