The Bureau of Economic Analysis (BEA) released a brand new set of data yesterday:  Real Personal Income for States and Metropolitan Areas, 2007-2011 (Prototype Estimates).  The data are not as timely as those we usually cover here on the Arkansas Economist, but they are rich in detail.

When economist refer to “real” magnitudes, it means that the data have been adjusted to reflect price differences.  Typically this involves adjusting “nominal” growth rates to account for changes in the price level over time — i.e., inflation.  What is truly novel about the prototype estimates that came out yesterday is that they are also adjusted to reflect differences in relative price levels from one region to another.

As described in a previous post, the BEA’s new set of Regional Price Parities (RPPs) are intended to measure differences in the cost of living across states and metro areas.  Hence, the “real” personal income statistics released yesterday convert dollar-denominated figures into units of current local purchasing power.

As shown in Figure 1 below, the cost of living varies considerably among the states.  In 2011, the RPP for Arkansas was 89.2, meaning that prices in Arkansas are more than 10% below the national average (which is equal to 100, by definition).  The highest prices in the nation are in Hawaii (116.0) and the lowest are in South Dakota (87.0).  In the 2011 data, Arkansas ranked as having the 5th lowest prices in the nation. 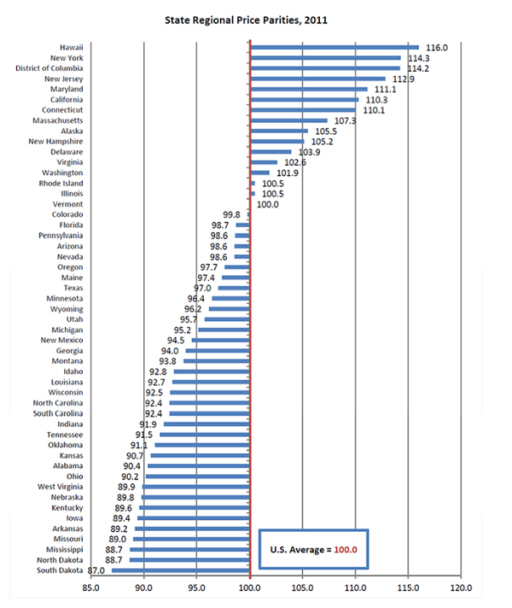 As shown in Figure 2, RPPs do not vary much over time, but they do differ even among areas within the state.  As of 2011, the average RPP for metropolitan areas in Arkansas was 90.9, while the non-metro RPP was only 85.5. 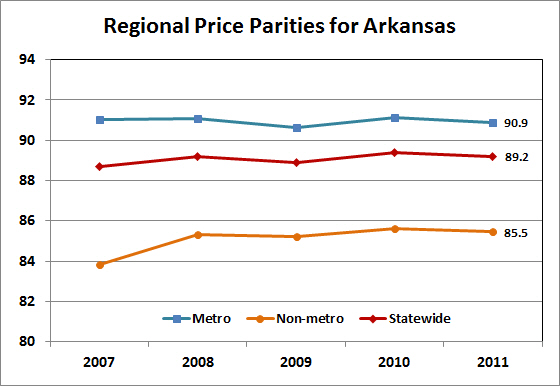 To the extent that RPPs do vary over time, increases or decreases can be interpreted (roughly) as indicating a higher or lower rate of inflation than the national average.  Typically, nominal growth rates are converted to real values by simply adjusting for the nationwide inflation rate.  By using the RPP adjustments, the real income calculations reflect a more accurate and nuanced measure of income that better reflects purchasing power at the local level.  Figure 3 shows changes in personal income in Arkansas — and for its metro and non-metro areas — from 2008 through 2011.  The recession of 2008-09 is reflected in the negative growth rates in 2009.  Statewide, real income declined by 2.5%, but the downturn was sharper (-3.3%) in the non-metro areas of the state than in the metro areas (-2.1%).  During the recovery in 2010 and 2011, total metro-area income has grown faster than non-metro income. 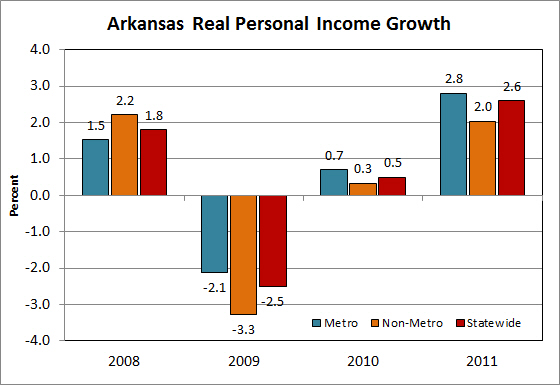 However, there is one additional adjustment that is necessary to evaluate how incomes support real purchasing power:  population growth.  If real income in an area is rising simply because there are more people earning the same amount per person, then living standards have not really improved.  Consequently, the best measure of overall economic welfare is “real per capita personal income,” displayed in Figure 4. 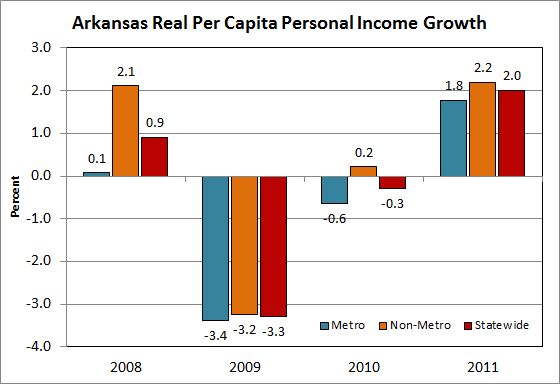 In general, the metro areas of the state have been growing in population, while the non-metro regions have experienced slower growth — or even outright population declines (see Arkansas Population Estimates for 2012).  Figure 4 shows that these changes in population are important.  In real per capita terms, the recession hit metro and non-metro areas about equally, and the recovery has been slower in metro areas.  In fact, metro area per capita real income declined in 2011, pulling the statewide average negative.  Non-metro areas displayed a small but positive growth rate.

The most significant implication of using RPPs to adjust nominal incomes is how it affects comparisons of the relative purchasing-power of incomes.  It is often noted that Arkansas is far below the national average of per capita income.  However, when regional differences in prices are taken into account, the standard of living in Arkansas is much closer to the national norm.  In nominal terms, Arkansas per capita income was only 81% of the U.S. average in 2011.  But after adjusting for price differences, real per capita income (RPP-adjusted) was 91.2% of the national average.  The adjustment for relative prices moves Arkansas up in the rankings among the 50 states plus D.C. from #46 to #41. 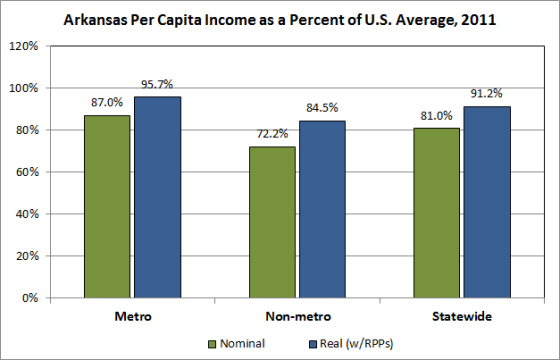 Source: Bureau of Economic Analysis, with calculations by IEA.

Metropolitan Areas
The RPP data in yesterday’s report are also broken down by individual Metropolitan Statistical Areas (MSAs).  Even among the various MSAs, Relative Price Parities differ considerably (Figure 6).  Prices are higher in the larger MSAs of Memphis, Little Rock, and Fayetteville.  The smaller metro areas have prices that are comparable to the non-metro areas of the state. 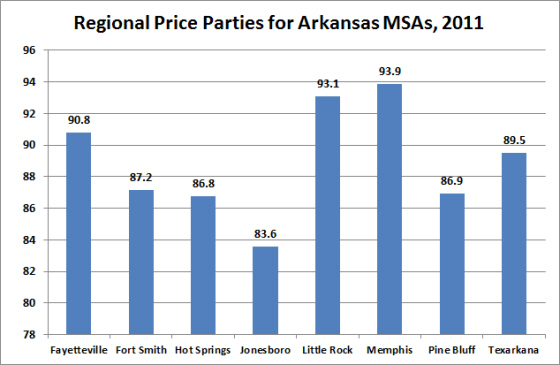 Real per capita income growth rates in Figure 7, below, reveal an uneven pace of recovery among the state’s metro areas during 2010 and 2011.  In 2010, the negative growth in total metro area income (shown in Figure 4) was concentrated entirely in three MSAs:  Fort Smith, Little Rock, and Jonesboro. Growth was positive in Arkansas’ other metro areas.   In 2011, however, growth rates were positive for all areas of the state. 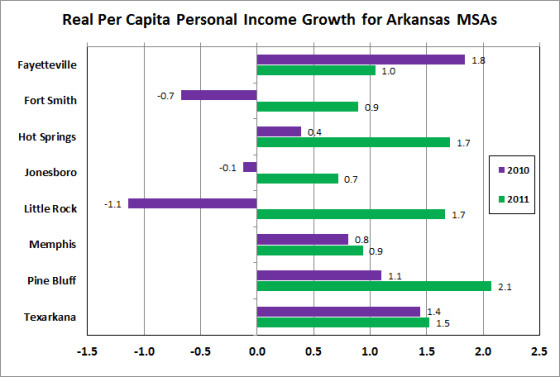 Finally, how do the state’s MSAs stack up in terms of real per capita personal income, adjusted for purchasing power?  Figure 8 shows that even though prices tend to be higher in larger metropolitan areas, higher incomes tend to compensate for the differences.  In dollar terms, incomes in Arkansas MSAs range from 74.3% of the national average in Pine Bluff to 96% in Little Rock.  After adjusting for relative prices, the real per capita income figures show that Little Rock has a standard-of-living slightly above the national average.  Pine Bluff remains the MSA with the lowest relative income level, but the standard of living is nearly 11 percentage points higher than the nominal, dollar-denominated figures suggest. 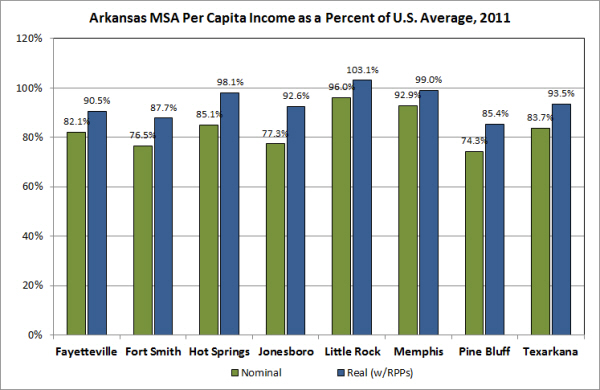 Source: Bureau of Economic Analysis, with calculations by IEA

The new RPP data have now moved from the experimental phase to prototype.  There are likely to be further refinement in the methodology and coverage of the data, but it is extremely useful to now have an official set of measurements for geographic relative price differences.  As detailed here and in yesterday’s report from the BEA, the new data bring a novel perspective to the examination of income differences across the nation and within the state of Arkansas.