Arkansas Employment and Unemployment – May 2013 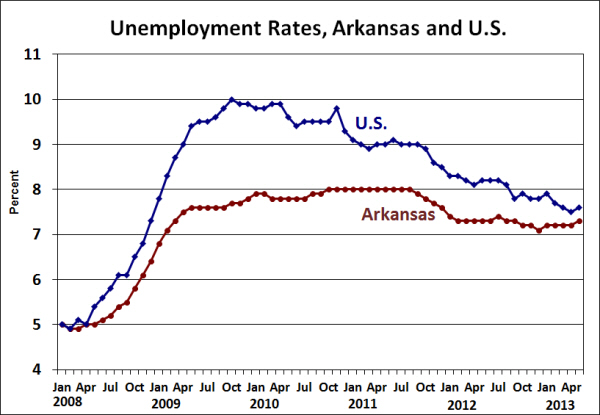 There were a couple of positive tidbits in the report from the household survey:  The number of employed and the size of the total labor force were up for the second consecutive month.  Both of these indicators had been declining precipitously since early 2012.  However, the number of unemployed was up by over 1700, bringing the total number of unemployed back up to a level comparable to last October. 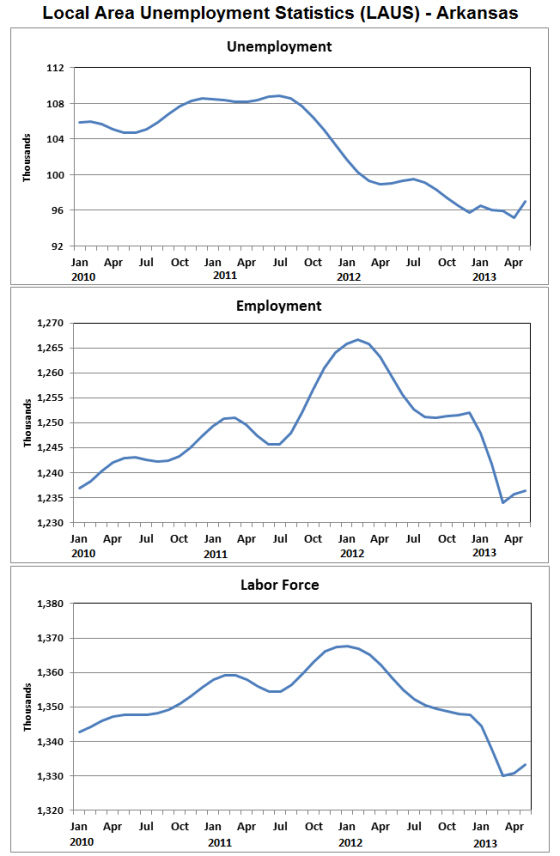 Payroll Survey
Data from the survey of employers was no more encouraging than the household survey:  Nonfarm payroll employment declined by 5,900 (seasonally adjusted*).  Many of the service sectors that have been supporting employment growth during the slow recovery were down in May.  For example, Professional & Business Services fell by 2,300 and employment in Leisure & Hospitality Services was down 1,100.  Even employment in Education & Health Services fell by 900. 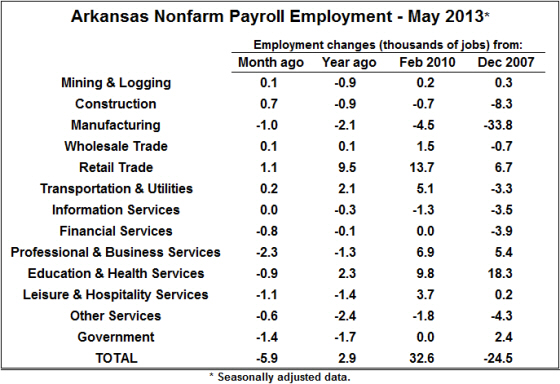 Two bright spots in the payroll survey:  Although it remains lower than a year ago, construction employment was up 700 from April to May (seasonally adjusted*).  Jobs in retail trade also increased — up by 1,100.  Retail sector employment is now nearly 13,700 higher than at the employment trough of February 2010, and up 6,700 from pre-recession levels.  Although several service sectors showed employment declines for the month, overall employment in services is generally  higher than before the recession.  But with employment in goods-producing sectors down by over 41,000 since December 2007,  the overall recovery of jobs since February 2010 has been only 32,600 (compared to 57,100 job losses between December 2007 and February 2010).

Mixed Signals
Neither the household survey nor the payroll survey provided much in the way of good news this month.  But more disturbing is the conflicting employment trends indicated by the two reports.  Over the past 12 months, payroll employment has increase by around 3,000 jobs — not very strong growth, but positive.  Over the same period, however, the household survey is showing a decline of more than 23,000 jobs.  It is not unusual for the two surveys to give conflicting signals in the short-run, but rarely do they diverge this significantly over a longer period of time. 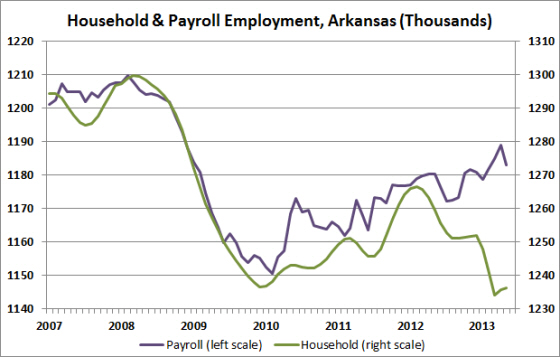 Generally speaking, economists consider the payroll survey to be more accurate, but it is also subject to considerable future revision as more detailed information becomes available.  It is quite likely, therefore, that the divergence between household and payroll reports will be reconciled by a downward revision to the payroll data.  Annual revisions will not be officially published until next March, however, so we’ll be monitoring incoming data closely in an effort to sort through the differences we’re seeing between the two surveys.