Metro Area Employment and Unemployment – May 2013

The lead from today’s metro area employment and unemployment report noted that “unemployment rates were lower in May than a year earlier in 253 of the 372 metropolitan areas.”  Unfortunately, none of Arkansas’ Metropolitan Statistical Areas (MSAs) were included in that tally.  As shown in the table below, only in Fayetteville was the unemployment rate unchanged compared to May 2012.  Around the rest of the state, increases in unemployment rates ranged from +0.2% in Jonesboro to +0.7% in Pine Bluff. 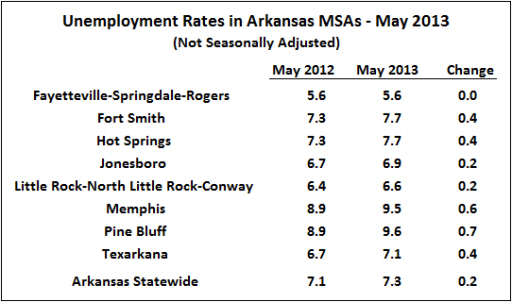 As is typical for May, the not-seasonally-adjusted unemployment rates rose compared to the previous month.  But even after seasonal adjustment, rates were higher in May than they were in April.  The smoothed seasonally adjusted metropolitan area estimates, shown below, showed upticks in unemployment rates for all of the state’s MSAs except Little Rock. 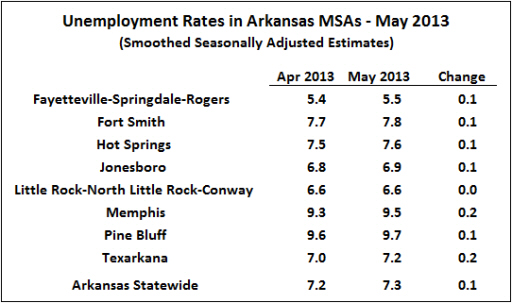 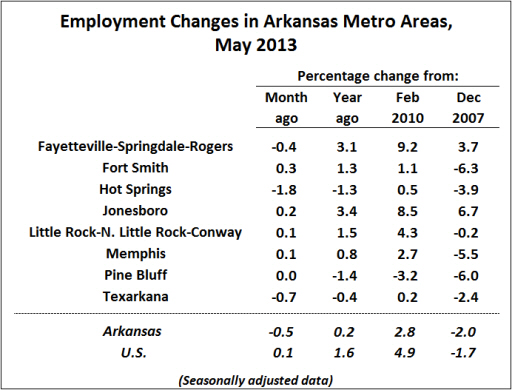 Payroll vs. Household Employment
In the context of the statewide employment situation, we have noted that the household and payroll surveys are showing widely divergent trends.  Over the past 12 months, the payroll survey reports a net increase of about 3,000 jobs statewide while the household survey indicates a decline of more than 23,000 jobs.  The discrepancy carries over into the metro area data.  As shown in the table below, household-based employment estimates are showing declines in every MSA except Fayetteville and Jonesboro, while the payroll survey shows only 3 metro areas with year-over-year declines.  In every case, the household survey is showing weaker employment growth than the payroll survey.  Note that the discrepancy does not apply to U.S. data — in fact, the nationwide payroll survey is showing stronger growth than the household-based data.  Given the magnitude and persistence of the divergence, it seems likely that an explanation or reconciliation will only be possible after subsequent revisions of the data. 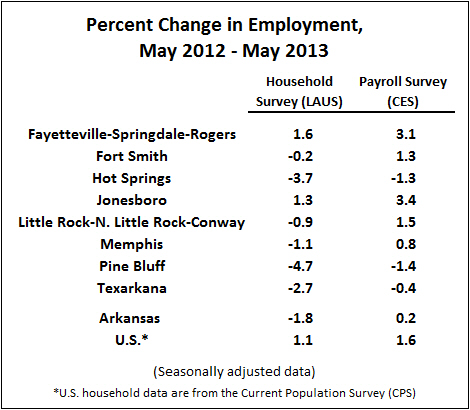