Recent statistics on personal income have been subject to significant influences by Federal tax policy.  In the most recent quarter (2013:Q1) Arkansas personal income declined by 1.9%, compared to an average decline of 1.2% nationwide.  These declines followed sharp increases in the fourth quarter of 2012: +3.0% for Arkansas (revised up from 2.2%) and +2.8% for the U.S. (revised up from 1.9%).  The relatively large drop in Arkansas in the first quarter ranked the state #48 among the 50 states plus D.C.  But as noted in the news release from the Bureau of Economic Analysis, “The decline in first-quarter personal income reflected the effects of several special factors including the expiration at the beginning of 2013 of the ‘payroll tax holiday.'”

In Figure 1 below, total personal income for Arkansas and the U.S. are compared on an index scale, with the previous business cycle peak (2008:Q2) normalized to a common value of 100.  Two prominent features are shared by the U.S. and Arkansas series:  a sharp increase in the 1st quarter of 2011 and an equally sharp decline in the 1st quarter of 2013.  These movements largely reflect the initiation and conclusion of the payroll tax holiday. 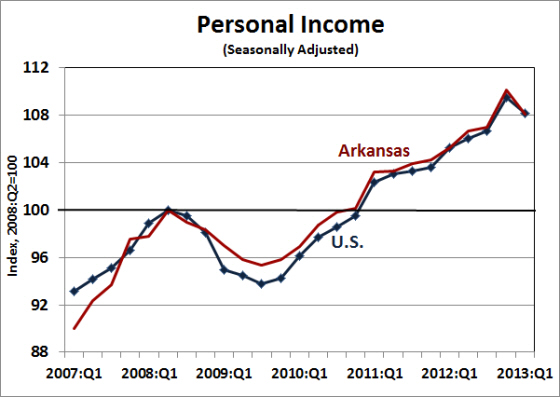 To get an idea of the magnitude of the tax holiday effect, Figure 2 shows two ratios constructed using the data for Arkansas.  The denominator for both ratios is the sum of “Wage and salary disbursements” and “Proprietor’s income”.  The numerators are (1) “Employee and self-employed contributions for government social insurance” and (2) “Employer contributions for government social insurance.”  The payroll tax holiday affected the first, but not the second. 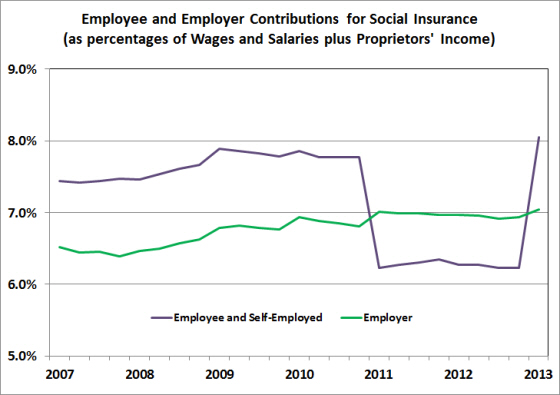 The sharp drop in the employee ratio represents the payroll taxes that were not deducted from employee paychecks during 2011 and 2012.  By using simple regression methods, we can use the employer contribution ratio to estimate the magnitude of the tax holiday’s impact on wages and salaries (and on total personal income).  The result of this exercise reveals that the payroll tax holiday boosted Arkansas personal income by nearly a full percentage point (0.96%).  A comparable calculation for the U.S. suggests a slightly smaller impact (0.92%).  As a relatively low-income state, the payroll tax holiday had a larger-than-average impact in Arkansas because more wage and salary income is subject to Social Security taxes.

These quarter-to-quarter growth rates are also affected by another set of tax-policy changes:  A number of other income tax increases were scheduled to take effect at the beginning of 2013, prompting “the acceleration of the receipt of income, especially personal dividends and salary bonuses, into the fourth quarter in anticipation of first-quarter changes in individual income tax rates.”  (An example is the special $5 per share dividend paid out by Little Rock-based Dillard’s Inc. at  the end of 2012.)  The impact of this effect is more difficult to quantify since it could potentially impact a number of categories in the personal income accounts; and more importantly, it is driven by behavioral responses to tax rate changes.

One manifestation of the end-of-year distortion is obvious in the “Dividends, interest, and rent” category of personal income.  Figure 3 shows this category of income as a percent of total personal income (using data for Arkansas).  The “hypothetical” path illustrated in Figure 3 is constructed by simply averaging the values for the prior and subsequent quarters.   This method implicitly assumes that the surge in income in 2012:Q4 would not have been otherwise realized — but it serves as a decent first-approximation of the effect. 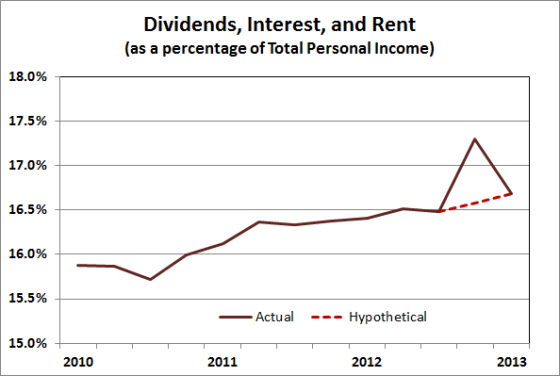 If Dividends, etc., had followed the hypothetical path in Figure 3, personal income in Arkansas would have been 0.72% lower than reported in the fourth quarter of 2012.  For the U.S., total personal income would have been 0.60% lower.  This would also have the effect of lowering growth rates for the fourth quarter of 2012, and raising quarterly growth rates for the first quarter of 2013 by similar magnitudes.  Table 1 summarizes the impact of the two effects independently and jointly:

The results of these counterfactual exercises are just estimates, of course.  In particular the fourth quarter surge in income is likely to have affected sources of income other than dividends so the growth-rate adjustment is partial, at best.  We can conclude, however, that the dramatic ups and downs in personal income growth over the past two quarters are related to tax policy changes.  In the absence of these changes, fourth quarter growth would have been lower and first quarter growth higher.

Transfer Payments and Inflation
In addition to the temporary effects of tax policy changes, personal income data are influenced by other factors relating to public policy.  For example, government transfer payments generally follow a counter-cyclical pattern — rising during recessions and tapering off during economic expansions.  In part, this is due to the so-called automatic stabilizer effects of government policies:  For example, unemployment insurance payments increase when the unemployment rate rises.  In addition, policymakers often respond to recessions by adopting specific stimulus policies.

Figure 4 shows how Personal current transfer receipts have grown during and since the recession of 2008-09.  Expressed as a percent of total personal income, transfers increased sharply in 2009 and have since held relatively stable.  For the U.S., transfers rose from less than 15% of total income up to approximately 18%.  For Arkansas the transfer share rose from 20% to more than 24%.  The upticks in these ratios in 2013:Q1 partly reflect continued increases in transfer receipts, but are also related to the decline in total personal income induced by the end of the payroll tax holiday. 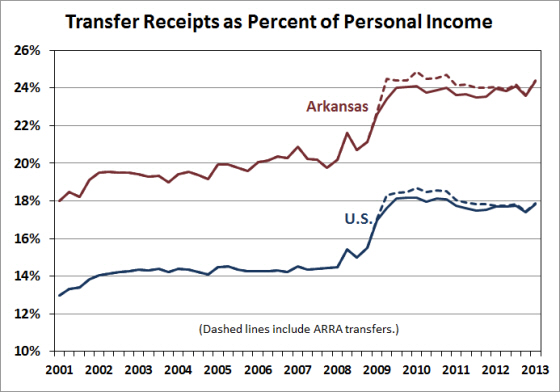 By removing “personal current transfer receipts” we can get a clearer view of the strength of income growth in the private sector — wages, salaries, proprietors’ income, etc.  As shown in Figure 5, the recovery in personal income less transfers has not been as substantial as total income (shown in Figure 1).  Whereas total income in the first quarter of 2013 was 8% higher than the previous cyclical peak, the measure that excludes transfers is now only 4 to 5% above early-recession levels. 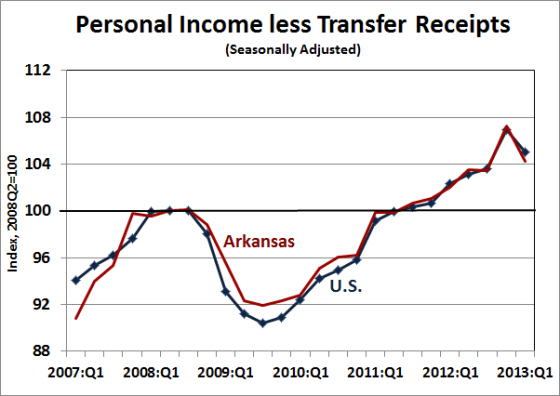 Finally, one further adjustment is helpful for putting personal income growth into context: accounting for inflation.  Over the past 5 years, inflation has eroded the purchasing power of income by over 8% (as measured by the price index for personal consumption expenditures).  As a result, the real (inflation-adjusted) value of personal income has not risen as much as the nominal (dollar-denominated) value.  Figure 6 shows Real Personal Income less Transfer Receipts.*  After the adjustment for inflation, this measure of personal income remains below its value from the reference-period of 2008:Q2.  The surge in income during 2012:Q4 had briefly raised income to the parity-value of 100 for both Arkansas and the U.S., but the first-quarter downturn brought it back down to -2.6% for Arkansas and -1.9% for the U.S. 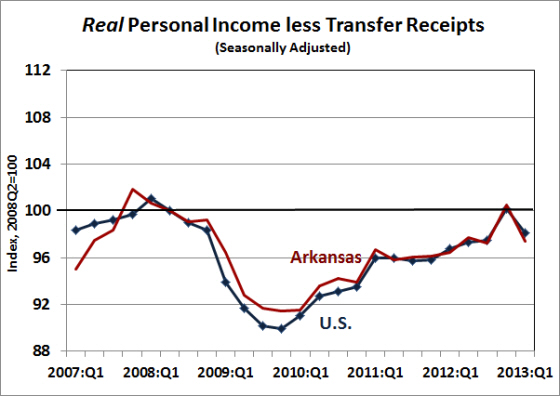