The revised payroll statistics that were announced on Monday showed a cumulative downward revision to Arkansas employment that amounted to approximately 11 thousand jobs as of October.  That is, with more accurate source data and refined statistical models, we now know that the previously-published data were overestimating actual employment growth.  These revisions also had an impact on  payroll data for the state’s metropolitan areas. 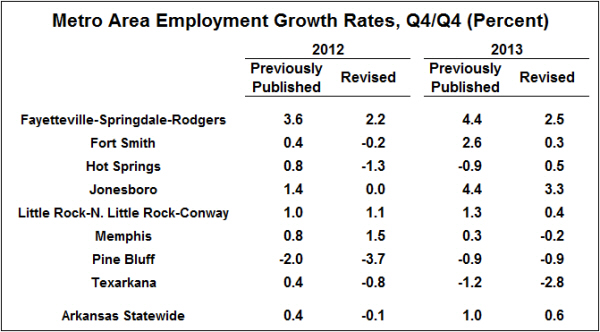 The revision resulted in slower measured employment growth for nearly all of the state’s MSAs in both years.  Two exceptions were Little Rock and Memphis, which saw slight upward revisions for 2012 growth.  Nevertheless, 2013 growth rates were revised downward in each case.   Another exception was Hot Springs, which saw an upward revision in its growth rate in 2013.  In the pre-revision data, only one metro area (Pine Bluff) had negative growth in 2012.  The revised data showed contractions in four of the eight metro areas.

The two figures below illustrate the nature of the revisions for all eight metro areas.  The data are indexed to equal 100 in the fourth quarter of 2007, so the paths shown in the two figures illustrate cumulative employment growth since the beginning of the great recession.  The previously published data showed that Jonesboro, Fayetteville and Little Rock were all in positive territory — that is, they had higher levels of employment in 2013:Q4 than in 2007:Q4.  With the data revisions, Little Rock dropped below the break-even point.  The metro area that suffered the largest qualitative loss was Fort Smith.  Pre-revision data had suggested positive job growth in Fort Smith for most of the past two years.  The revised figures show approximately zero growth over that period. 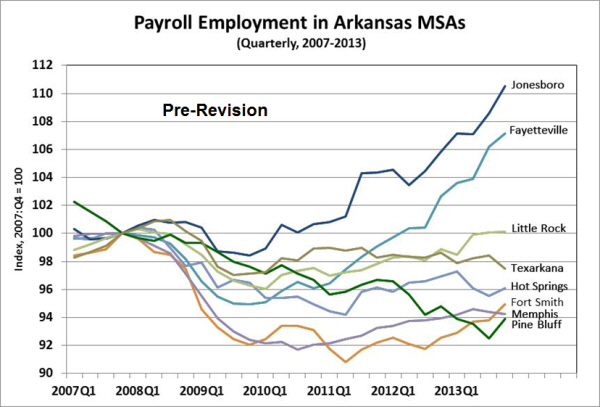 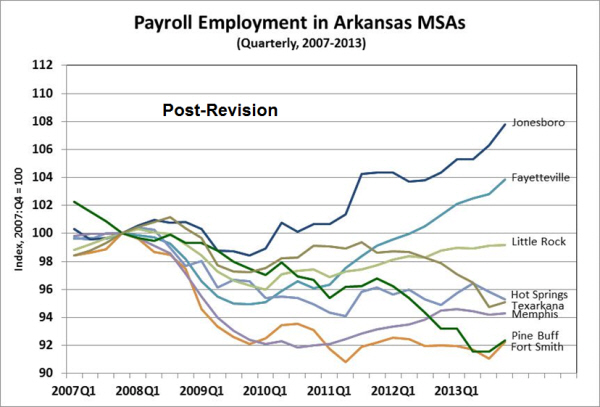