The first employment report of the new year came out this morning, and the latest data suggest some positive developments.   The headline from this morning’s release from the Department of Workforce Services was that the unemployment rate declined from 7.4% to 7.3%.

As we have noted recently, the annual exercise of data revisions has revealed notable weakness in Arkansas labor markets during 2012 and 2013.  The unemployment rate has been persistently hovering around 7.5% as the national rate declined, and revisions to payroll employment were expected to show that fewer jobs were created last year than initial reports had suggested.  Nevertheless, the newly-revised data also indicate that trends in both household employment and payroll employment have been improving in recent months. 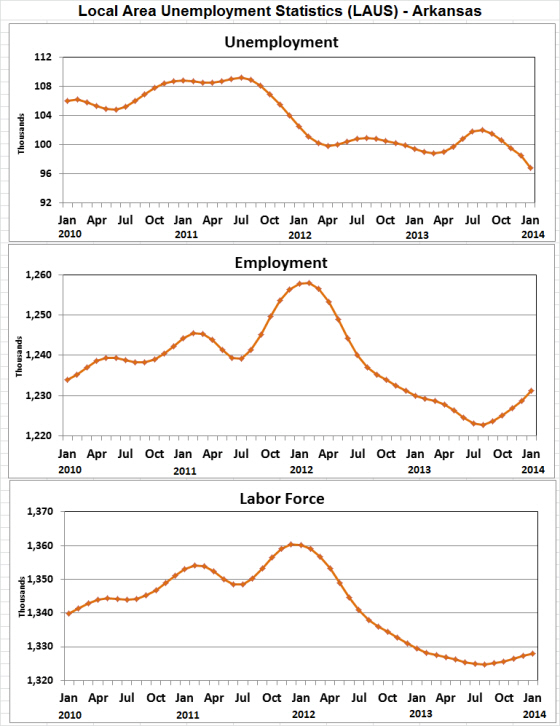 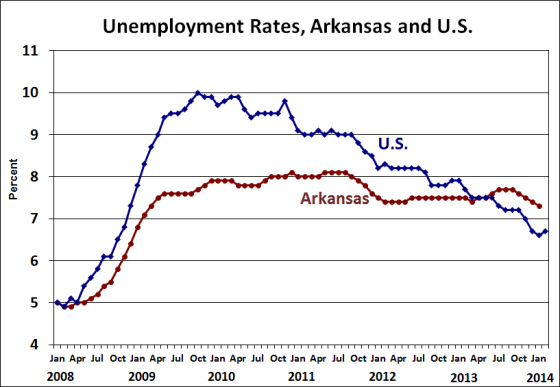 Payroll Employment
The payroll employment statistics that came out this morning reflected new benchmark revisions for the period April 2012 through December 2013.  As expected, the level of employment in mid-2013 was revised sharply downward — by approximately 11,000 jobs as of October 2013.  Nevertheless, the routine monthly revision of the December statistics and a relatively strong gain in January employment (+4,500, seasonally adjusted) combined to suggest a significant improvement in recent employment trends.  Consistent with the household data, the newly-revised payroll data show five consecutive months  of employment gains, with a cumulative increase of 16,800 jobs since August 2013. 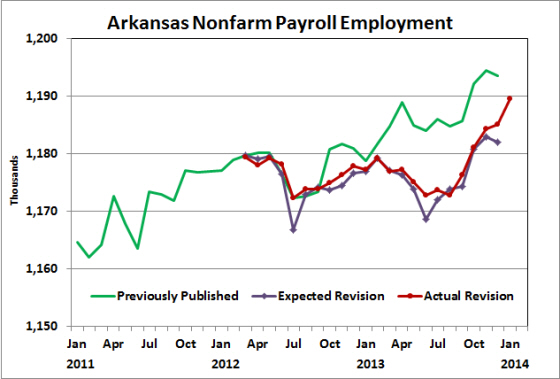 The table below shows the breakdown of payroll employment by sector.  The pattern of employment gains in January was somewhat atypical of the post-recession pattern:  Some of the service-providing sectors which have been showing the largest gains since the end of the recession suffered declines in January, while goods-producing sectors showed some unexpected gains.  Particularly noteworthy was the increase in construction employment — up 2,300 on a seasonally adjusted basis.  Overall, nonfarm payroll employment was 12,400 higher in January 2014 than in January 2013.  That represents a cumulative increase of 39,000 jobs since the post-recession trough of February 2010.  Compared to pre-recession employment levels, however, we are still down by 18,000 jobs. 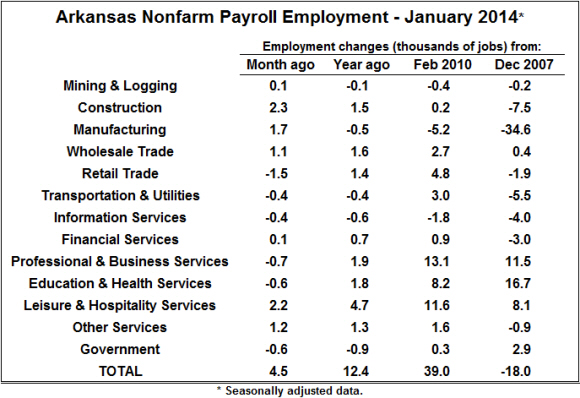 The revisions to both the household and payroll data show that labor market conditions in Arkansas were worse than we thought during much of 2012 and 2013, but both surveys indicate significantly improving conditions over the past five months.  In the long, slow process of recovery from the recession of 2008-09, we are still lagging behind pre-recession labor market conditions — but recent data indicate emerging favorable trends.