Unemployment rates in Arkansas Metropolitan Statistical Areas (MSAs) declined in December — the third consecutive month of across-the-board reductions in jobless rates (seasonally-adjusted).  Previously-released statewide data showed that the Arkansas unemployment rate fell from 8.3 percent in September to 7.7 percent in December.  Rates in Arkansas metro areas showed even sharper declines over the three-month period–ranging from 0.7 percentage points in Hot Springs to 1.7 percent in the Memphis MSA. 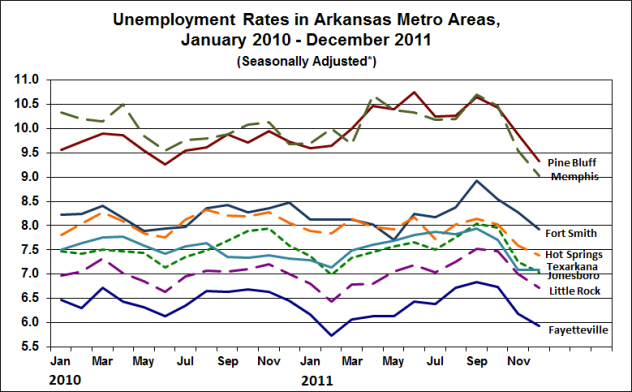 As shown in the table below, the raw data from the Bureau of Labor Statistics showed unemployment rates rising from November to December.  However, these increases were entirely seasonal in nature.  After seasonal adjustment, the monthly change in unemployment rates was negative for every MSA except Texarkana, where the rate was unchanged at 7.1%.  The end-of-year declines in unemployment bring Arkansas metro areas back into the set of MSAs with unemployment rates lower than a year earlier.  According to the BLS press release this morning, 329 of the nation’s 372 metro areas fell into this category in December.

Independent data on nonfarm payroll employment was not as unambiguously positive as the household unemployment data.  Employment was up in 5 MSAs, but declined in Hot Springs, Jonesboro and Fort Smith.  Since statewide employment reached a low-point in February 2010, most of the state’s MSAs have seen positive employment growth.  However, Fort Smith and Pine Bluff have continued to experience job losses.  Compared to the start of the recession in December 2007, only Hot Springs has seen net positive job growth. 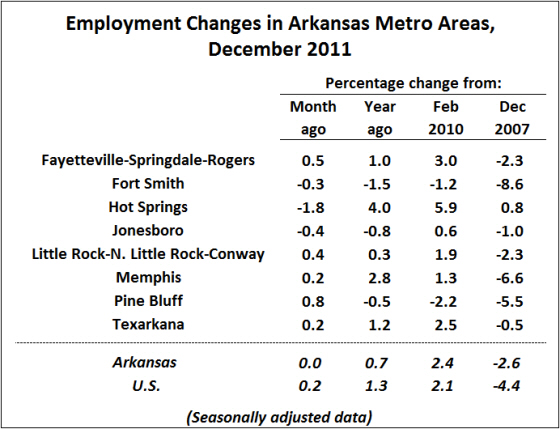