Preliminary data show that Arkansas Taxable Sales Including Gasoline (ATSIG) rose by 1.8% in the fourth quarter of 2011, and were up 5.1% from the previous year.  Excluding gasoline, Arkansas Taxable Sales (ATS) were up 1.9% in the fourth quarter.  After a period of approximately zero growth from mid-2010 through mid-2011, ATS expanded by 4.2% in the second half of 2011. 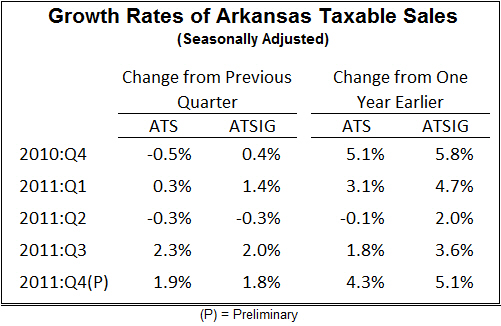 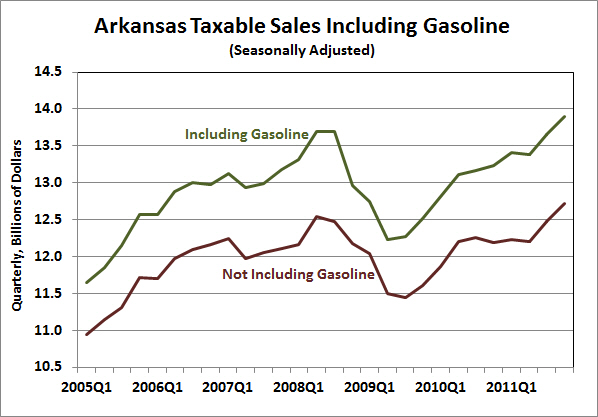 The preliminary ATS data are based on monthly revenue reports from the Department of Finance and Administration.  Their latest report indicated fairly strong growth in Gross Receipts in January (+4.9% from the previous year).  Gross Receipts is a measure that primarily reflects sales and use taxes, with approximately a one month lag.  Hence, the report suggests that holiday sales in December 2011 were much improved over the previous year.  Final figures for Arkansas sales and use tax receipts will be available with the release of the January 2012 issue of Arkansas Fiscal Notes.

Gasoline sales data for the fourth quarter are incomplete, but preliminary estimates suggest an increase of approximately 1% — in spite of lower gas prices.  According to the oil price information service, the average price of gasoline in Arkansas was $3.22 in the fourth quarter — down from $3.49 in the third quarter.

The growth in ATSIG in the second half of 2011 brings Arkansas sales growth back in line with national retail sales.  According to the Census Bureau, U.S. Retail Sales increased by 1.2% in the third quarter and 1.9% in the fourth quarter.  ATSIG had been lagging behind in early 2011, but slightly outpaced U.S. retail sales in the second half of the year.  For the year as a whole, U.S. retail sales rose 6.9% compared to the 5.1% figure for ATSIG. 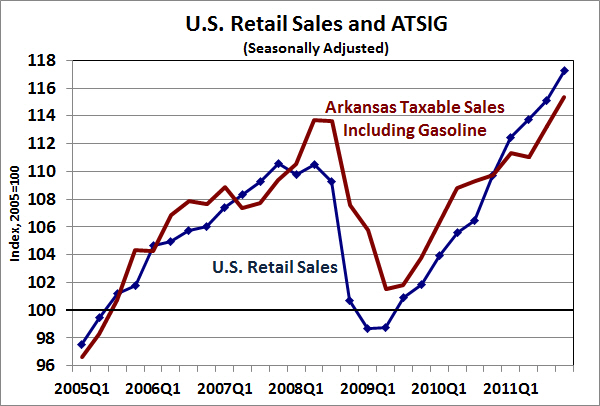 Arkansas Taxable Sales (ATS) is calculated by the Institute for Economic Advancement to serve as a timely proxy for Arkansas retail sales.  The series is derived from sales and use tax data, adjusting for the relative timing of tax collections and underlying sales, changes in tax laws, and seasonal patterns in the data.  Arkansas Taxable Sales Including Gasoline (ATSIG) incorporates data on the state motor fuel tax and gasoline prices from the Oil Price Information Service.

* Data are preliminary until the release of the DFA report, Arkansas Fiscal Notes for January 2012, and will be updated when information becomes available.