The final sales report of the year from the Arkansas Realtors® Association (ARA) showed that home sales in December were down 6.2% from December 2010.  Total sales for the year were reported to be down slightly from the previous year (-0.6%), marking 2011 as the slowest sales year in recent history.  Nevertheless, there is reason to be optimistic about residential real estate markets in Arkansas.  Although 2011 sales were lower than the previous two years, they had been boosted in 2009 and 2010 by the Federal home-buyer’s tax-credit programs.  As shown in the figure below, home sales exhibited unusual spikes in the final months of the first-time home buyer’s program (November 2009) and at the conclusion of the second round of home-buyer tax credits (April 2010).  Sales in 2011 followed a more typical seasonal pattern, without any temporary boosts from government incentive programs. 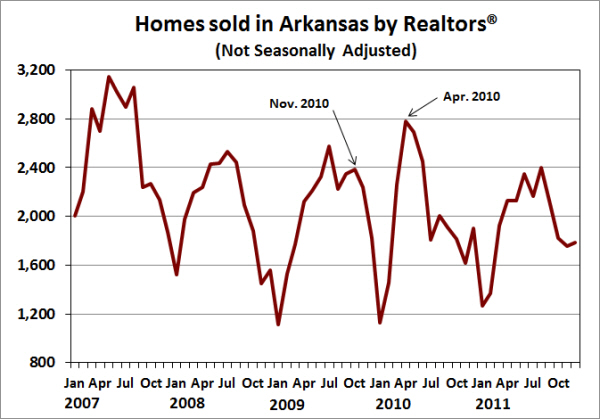 After using standard statistical techniques to seasonally adjust the data, the extraordinary nature of the policy-induced sales spikes becomes even more apparent.  More important, the seasonally-adjusted data show a trend of increasing sales over the course of 2011.  Extrapolating this trend forward into 2012 suggests the emergence of a long-awaited, sustainable recovery in Arkansas residential real estate markets. 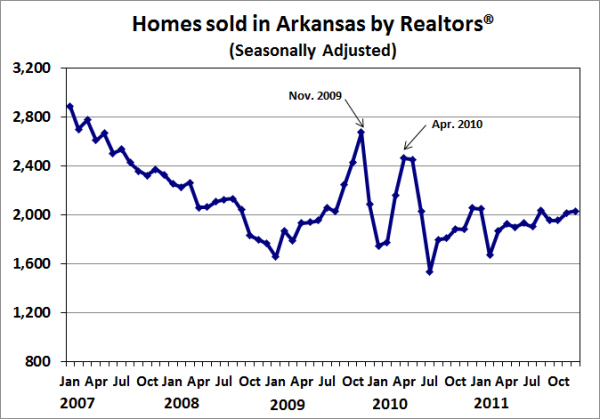 At the UALR Economic Forecast Conference in November, we anticipated that annual home sales for 2011 would be down slightly from the previous year (-0.8%), but that we would see a significant improvement in 2012 (+12.6%).  Although this would represent a significant improvement, the forecast is not based on expectations of a dramatic recovery in housing market conditions; rather, it reflects the expected outcome of slow steady growth starting from a very low base.  Given the typical seasonal pattern in home sales, however, it won’t be until the summer surge that we will have a clear indication of how the totals will end up in 2012.