The Arkansas unemployment rate declined to 7.7% in December, down from a revised 7.9% rate in November.   Over the last two months of the year, the number of unemployed declined by 6,469 and the number employed rose by 16,190.  Accordingly, the sharp drop in the unemployment rate has taken place in the context of an expanding labor force.  Since Spring of 2011, we had seen the labor force participation rate decline sharply as the unemployment rate rose.  In the final months of year we’ve seen that trend almost completely reversed and we’re now right about where we were before the summer doldrums hit the Arkansas employment market. 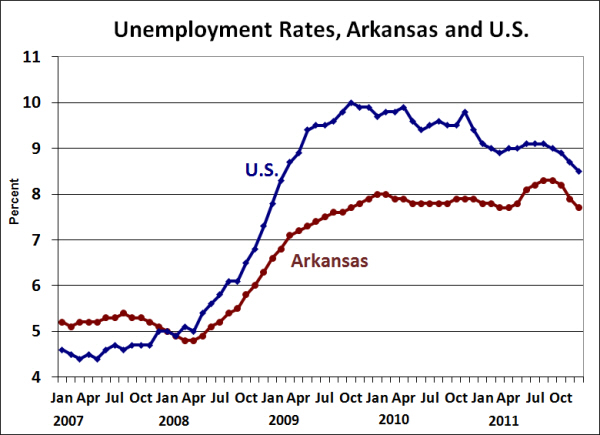 The improvement in unemployment indicated by the household survey suggests that the temporary weakness we saw during 2011 has abated.  But there is still reason to be cautious about the outlook for 2012.  In the independent payroll survey released as part of today’s report, total employment for the month declined slightly from the previous month (-500, seasonally adjusted).  Moreover, the employment total for November was revised down by 1,600.  For the two months together, payroll employment was up by 5,000.  However, total employment remains below a peak reached in April 2011. 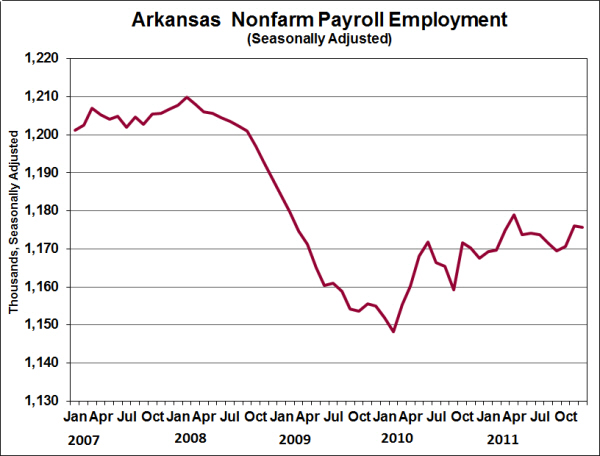 The December decline in payroll employment was spread across service-providing sectors.  One notable exception was Trade, Transportation and Utilities, which showed an increase of 1,900 jobs for the month.  Nevertheless, TT&U employment remains 4,800 jobs below the April 2011 peak.  Other sectors that continue to lag well below their levels of last spring include Manufacturing and Professional & Business Services. 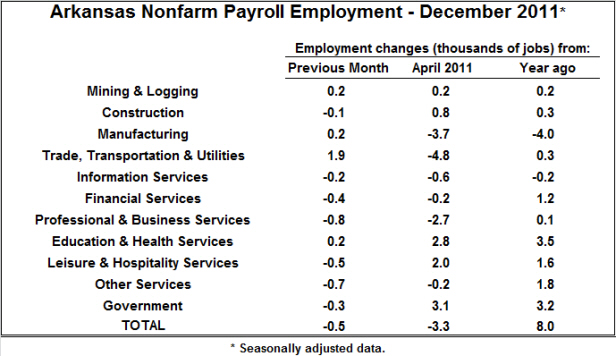 Compared to a year ago (December 2010), total payroll employment is up by 8,000.   However, the next monthly report (Scheduled for March 13), will include annual benchark revisions to the payroll data.  As discussed in a previous post, the data revisions are likely to result in a sharp downward revision to the payroll figures for early 2011.  As a result, we are likely to see the year-over-year employment gains revised away in light of updated, more accurate data.