The Bureau of Labor Statistics reported today that unemployment rates in May were lower than a year earlier in 331 of the nation’s 372 metropolitan areas.  All of the metro areas in Arkansas fell into this category.  Year-over-year changes ranged from -0.4 percentage points in Northwest Arkansas to    -1.1 percent in Memphis. 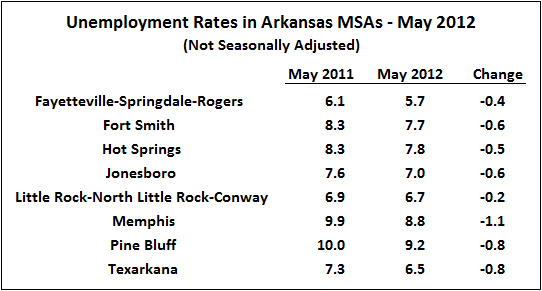 The reported unemployment rates were all up sharply from the previous month, but this largely reflects regular seasonal patterns.  According to the smoothed seasonally adjusted estimates released this afternoon, unemployment rates in May were largely unchanged from April. 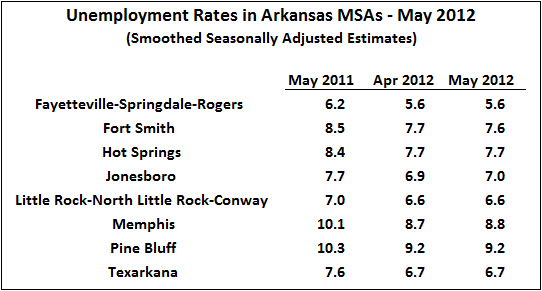 Today’s report from the BLS also noted that nonfarm payroll employment in May was up from the previous year in 266 metro areas.  Four of the state’s metro areas were included in this total.  The largest year-over-year percentage increase was recorded in Texarkana (+4.4%).  At the other extreme, payroll employment in Fort Smith was down 4.4%.  From April to May, payrolls were up in only three metro areas:  Little Rock (+0.7%), Pine Bluff (+0.8%) and Texarkana (+1.7%). 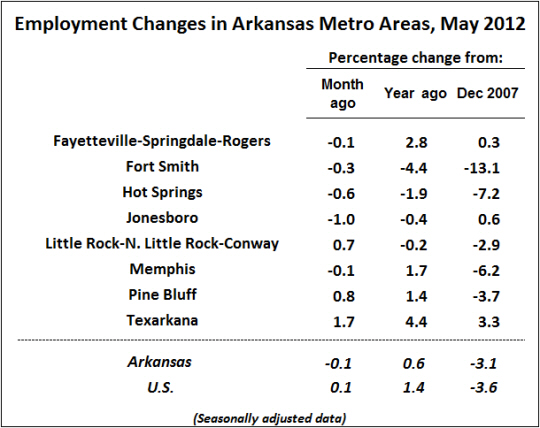