This morning, the Bureau of Labor Statistics (BLS) released the latest information from the Quarterly Census of Employment and Wages (QCEW), covering the final quarter of 2011.  Although it is not as timely as the monthly employment statistics that are published under the Current Employment Statistics (CES) program, the QCEW report is more detailed and considered to be far more accurate.  One main attraction of the QCEW is that it presents employment and wage statistics for individual counties.  For the 75 counties of Arkansas, today’s report shows a fairly wide range of labor-market conditions across the state.

For employment growth, the QCEW shows a statewide growth rate of +1.0% from the fourth quarter of 2010 through the fourth quarter of 2011.  As shown in the map below, county employment growth rates ranged from -11.0% in Calhoun County to +11.2% in Hot Spring County.  The highest-growth counties are scattered around the state, but tend to cluster near the four corners of Arkansas.  Slower growing counties are concentrated in the south-central and north-central portions of the state.   A total of 30 counties experinced declines in employment and 44 showed positive growth.  Employment in Lawrence County was unchanged. 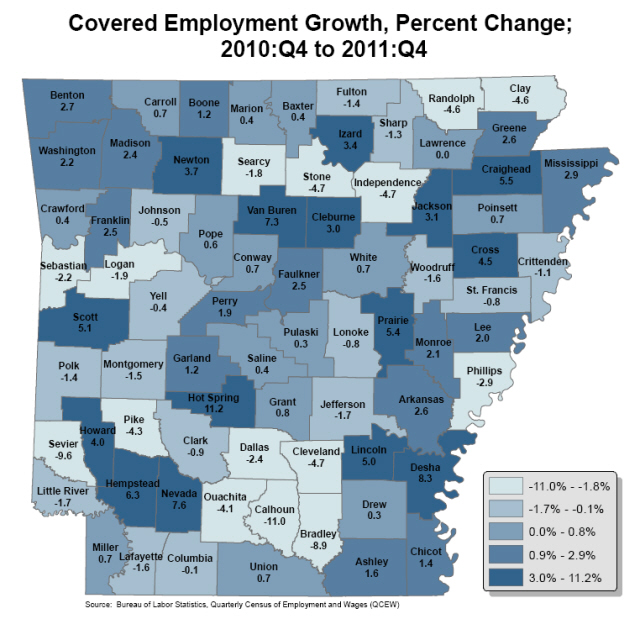 Mapping services provided by the GIS Applications Laboratory at the Institute for Economic Advancement.

Today’s report also included information on average weekly wages.  The statewide figures showed a decline of 1.2% for the year.  Growth rates for individual counties ranged from -13.9% in Bradley County to +21.4% in Stone County.  No clear pattern of wage changes is evident across the state, but many of the counties that saw positive wage growth are in the northern part of the state (although a handful of counties in the south and southwest also showed wage gains).  Nearly all of the counties across the center of the state (from Sebastian County in the east to Mississippi County in the west) experienced declining wages.  In all, 52 counties saw negative wage growth, 21 had postive growth rates, and wages in two counties (Hempstead and Newton) were unchanged. 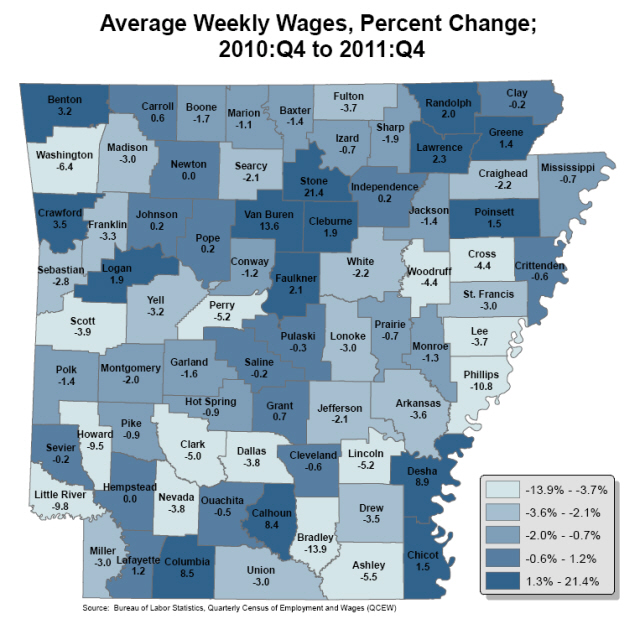 Mapping services provided by the GIS Applications Laboratory at the Institute for Economic Advancement.

Regular readers of the Arkansas Economist will recall that data from the QCEW are used in the annual benchmark revisions of the Current Employment Statistics (the regular monthly reports on state and metro-area payroll employment).  Although the annual revisions will not be released until March of 2013 — and will incorporate information from the 2012:Q1 QCEW report — the information published today suggests that the next revision will (once again) be substantial.  Stay tuned for more information on that topic in the coming days.