Personal incomes in Arkansas rose slightly in the first quarter, up 0.3% from the fourth quarter of 2011 (seasonally adjusted).  According to the report from the Bureau of Economic Analysis, Arkansas’ growth rate was the slowest among all the positive growth rates in the nation — although three states showed zero or negative growth.  On a year-over-year basis, income growth was 2.4%, ranking Arkansas #40 among the 50 states plus D.C.  By comparison, total U.S. personal income was up 0.8% from the previous quarter and up 2.9% from a year ago.  As shown in the chart below, Arkansas Personal Income is now approximately 6% higher than the peak recorded at the beginning of the recession. 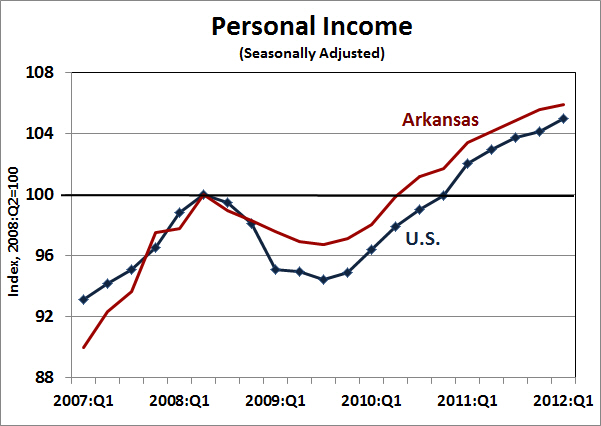 A sharp decline in farm incomes for the quarter–down by over 28% from the previous quarter–contributed to the overall weakness in the report.  Nonfarm incomes were  up by 0.6%.

Total earnings–which include wage and salary disbursements, supplements to wages and salaries, and proprietors’ income–were essentially unchanged for the quarter (+0.04%).  In addition to the substantial drop in farm incomes, a large decline was also evident in Real estate and rental and leasing (-13.76%).  These two sectors combined had a net contribution of -0.55 percentage points to total personal income growth.  As shown in the table below, a handful of industries generated fairly robust income gains, including Accommodation and food services, Management of companies and enterprises, Construction, and Transportation and warehousing. 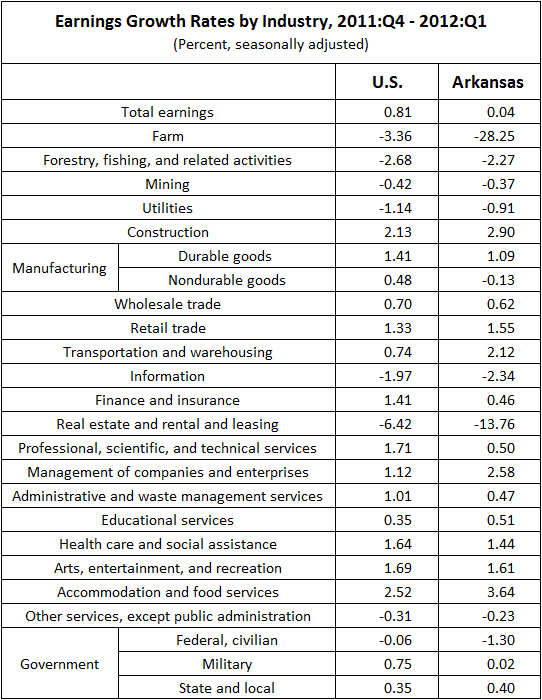 Note:  Today’s income report also included data revisions for 2011.  These changes were very small for Arkansas, but did result in a slight upward revision to growth in the fourth quarter.  The new data show an increase of 0.7%, compared to a previously-reported growth rate of 0.6%.