Arkansas Employment & Unemployment in May: No Change

New data from the U.S. Bureau of Labor Statistics (BLS) and the Arkansas Department of Workforce Services (DWS) show that the unemployment rate ticked up one-tenth of a percentage point in May.  However, it would be more accurate to say the the rate was unchanged for the month:  Calculated out to the second decimal point, the unemployment rate rose from 7.24% to 7.27% — not nearly enough to be considered statistically significant.  Changes in the number of employed (-52) and unemployed (+329) were far too small to be considered meaningful in any quantitative sense.  Since hitting a high-point in July 2011, the number of unemployed in Arkansas is down by more than 10,000 and the number of employed is up by nearly 36,000.

The statistics on Arkansas nonfarm payroll employment in May can be similarly characterized:  weak, but not significantly so.  For the month, total nonfarm payroll jobs were down by 1,000 (seasonally adjusted).  Meanwhile, the data for April were revised up by 1,400 jobs, so today’s statistics actually show a net increase compared to last month’s reported figures.  Compared to May 2011, the payroll report showed a gain of 6,500 jobs.  After briefly rising above 1.17 million jobs in June of 2010 and again in April 2011, this month’s report is the first since the recession to show two consecutive months above that threshold. 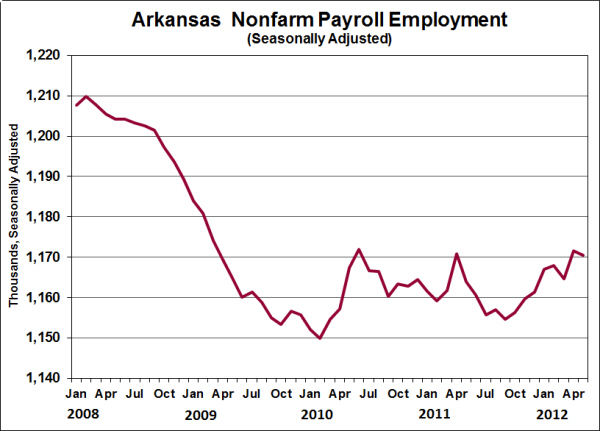 Sectors losing jobs in May included Retail Trade (-2,700), Leisure & Hospitality Services (-700), and Construction (-500).  Sectors gaining jobs included Professional & Business Services (+1,400), Manufacturing (+1,100),  and Government (+900).  The increase in Government employment was almost exclusively in the category of Local Government.  Compared to May 2011, employment is down in several sectors, including Construction, Manufacturing, Retail Trade, Financial Services and Professional & Business Services.  The year-over-year total job growth has been concentrated in the service sectors of Education & Health, Leisure and Hospitality, and Government (especially Local Government).  From the start of the recession in December 2007, total employment in Arkansas is still down by over 37,000 jobs. 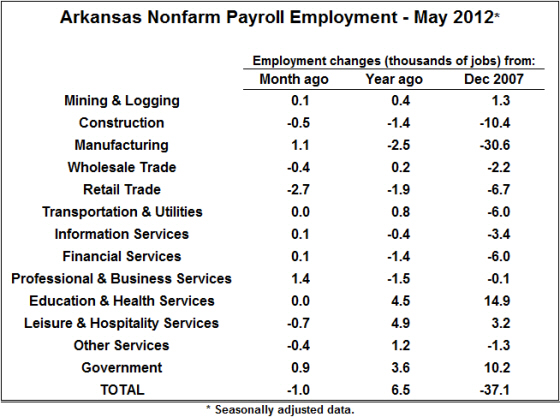 After two months of relatively weak employment reports on the national level, it is not surprising that the data for Arkansas employment in May are disappointing.  Nevertheless, the statistics do not indicate a downturn in the state’s labor market conditions;  Rather, they appear to represent a brief stalling of the upward momentum we’ve seen over the past several months.