Catching up from the federal government shutdown, the Bureau of Labor Statistics released August unemployment rates for the nation’s Metropolitan Statistical Areas (MSAs) yesterday.  The data were originally scheduled to come out on October 2.

For Arkansas’ metro areas, the results were decidedly mixed.  The not-seasonally adjusted data showed year-over-year unemployment rate changes that ranged from +0.6% in Pine Bluff to -0.7% in Fort Smith.  From August 2012 to August 2013, the unemployment rate declined in three MSAs and increased in four.  In Little Rock (and statewide) the rate was unchanged. 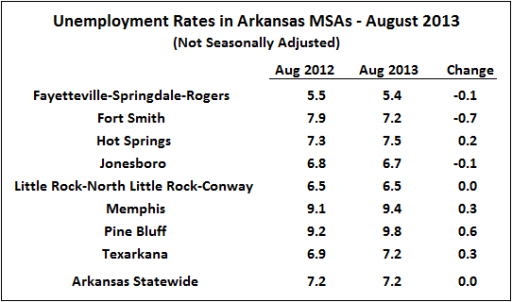 Monthly changes — calculated using smoothed seasonally adjusted estimates — were also mixed.  From July to August, the unemployment rate declined in Fort Smith, Memphis and Texarkana.  It was up one-tenth in Pine Bluff, and unchanged in the remaining metro areas. 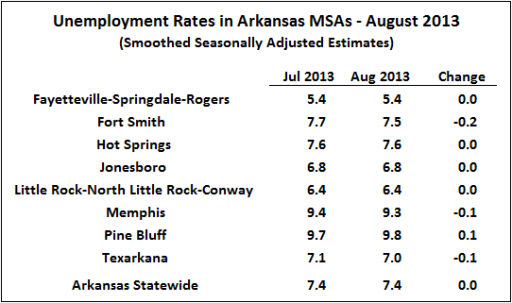 Note:  Payroll employment statistics were compiled before the government shutdown, and were previously reported on Arkansas Economist (here).