The August report from the Arkansas Realtors® Association (ARA) confirms that residential real estate markets in Arkansas are finally recovering from the recession/housing-crash.  And the recovery is substantial:  Sales for August were up 24% compared to August of last year.  Cumulative year-to-date figures show sales rising 12.7% from 2012.  As shown in the chart below, the August sales total of 2,818 was the highest single monthly total since the onset of the recession.  The last time sales exceeded 2,800 in a single month was August 2007. 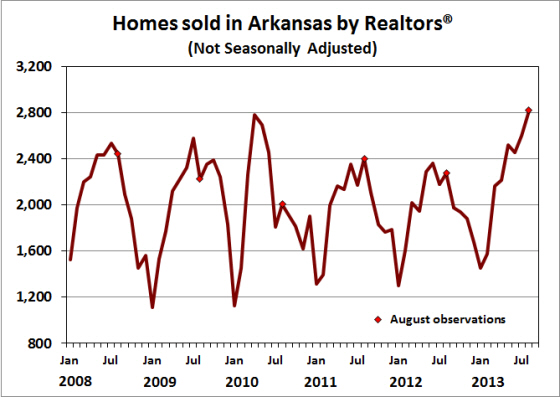 The August sales figures represent the final month of the typical June-July-August peak period for home sales.  As is evident from the not-seasonally adjusted data, sales typically taper-off during the remaining months of the year.  But even at the slower expected pace for the remainder of the year, 2013 sales are likely to approach 26,000 — the highest annual sales volume since 2007.  For the year as a whole, a growth rate approaching 10% would not be surprising.

Seasonally adjusted data–shown below–reveal that the pace of home sales has been accelerating over the past few months.  Even with the rising trend, the August sales figure represents a clear break-out. 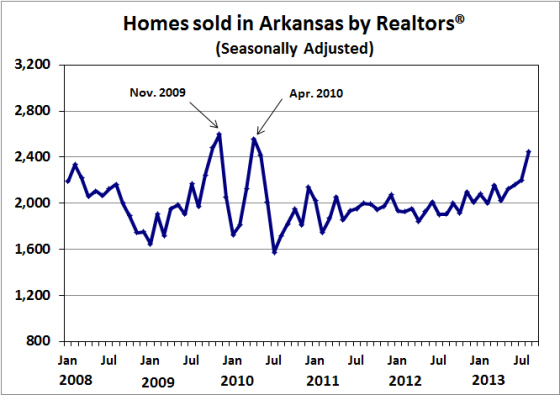 Data for individual counties shows that strong sales growth is a state-wide phenomenon.  Northwest Arkansas continues to be the strongest region in the state.  Combined sales for Benton and Washington Counties are up 21.9% year-to-date.  Among the eight counties with the highest sales volume, Pulaski County is the only one showing less than double-digit growth.  Nevertheless, the combined growth rate for the Central Arkansas counties of Pulaski, Saline, and Faulkner is 12.0%. 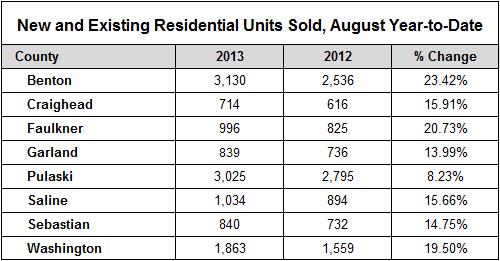