Yesterday was the scheduled release date for metro area employment and unemployment data from the Bureau of Labor Statistics, but no report was published due to the Federal government shutdown.  Nevertheless, data on payroll employment for metro areas had already been posted on the BLS website, so we do have some new figures to report.

As previously reported, statewide payroll employment declined by 1,200 jobs in August — approximately 0.1%.  The table below shows that employment declines were spread across several of the state’s metro areas.  Job losses were particularly sharp in Jonesboro (-0.6%), Hot Springs (-0.5%), and Texarkana (-0.5%).  Employment in Northwest Arkansas was unchanged from the previous month, and both Little Rock and Pine Bluff saw small employment increases. 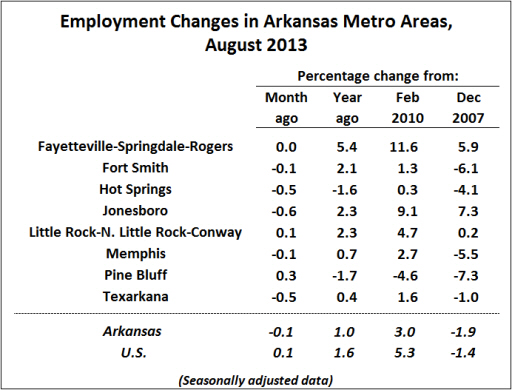 Over the past year, employment growth has been positive for most of the state’s metro areas, with the prominent exceptions of Hot Springs and Pine Bluff.  Since the national and state employment trough of February 2010, all metro areas except Pine Bluff have seen net increases.  Compared to pre-recession employment levels, however, only Fayetteville, Jonesboro, and Little Rock have experienced net positive job growth.