The most recent report also incorporated the latest comprehensive (benchmark) revision of the data.  As illustrated in the chart below, the newly revised data suggest that the drop in incomes during the 2008-09 recession was slightly less severe — but more protracted — than indicated by the pre-revision data.  Previously-published data showed a peak-to-trough decline of 4.7% (from 2008:Q2 through 2009:Q3).  The new data show a downturn off only 3.5% for the same period, but with a slower trajectory of recovery through 2010.  Since the beginning of 2011, however, the revised data show a slightly higher growth rate than previously reported. 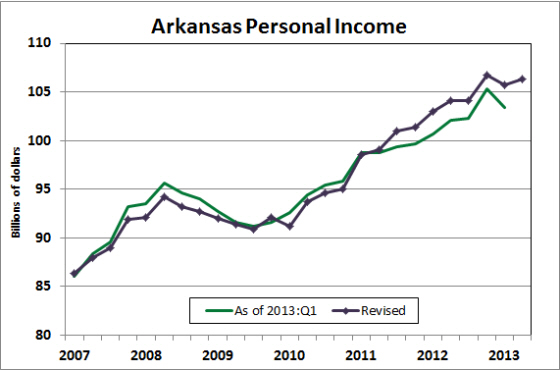 Data for U.S. personal income were also revised, altering the comparison of Arkansas and U.S. income growth during the recession and recovery.  As shown in the next figure, the new data suggest that the downturn in Arkansas was nearly as large as the U.S. average.  Previously, the data suggested that Arkansas’ downturn was not as severe as the nation’s.  On the other hand, the upward revision to Arkansas data in 2011 and 2012 now indicates that Arkansas is on a more rapid path of recovery than the nation as a whole.  As of the second quarter of 2013, personal income in Arkansas is 12.9% higher than its pre-recession peak.  U.S. personal income has shown a net increase of 11.9% over the same period. 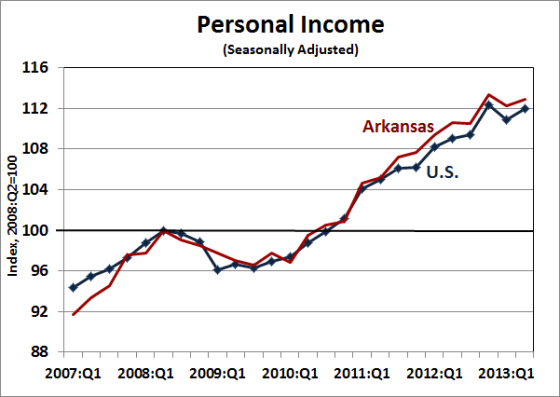 The newly-revised data had little impact on estimates of how recent changes in tax policy has affected personal income growth (see previous post).  The expiration of the payroll tax holiday at the beginning of the year is estimated to have lowered first quarter growth by approximately 0.9%.  The surge in dividend income in the fourth quarter of 2012 (to avoid higher income tax rates in 2013) added at approximately 0.7% to end-of-year income — subtracting a commensurate amount from first quarter growth.  Combined, these two effects reduced first-quarter growth by 1.6%.  The reported first-quarter growth rate of -0.9% (revised) would have been approximately +0.7% in the absence of these changes in tax policy.

Adjusting for the expiration of the payroll tax holiday.  Income growth from 2012:Q2 through 2013:Q2 would have been approximately 3.1% for Arkansas and 3.6% for the U.S.

Note:  Our analysis of the second-quarter personal income data was delayed by the Federal government shutdown.  The data were originally released on September 30, but were inaccessible from October 1 through October 16 while the website of the Bureau of Economic Analysis was non-functional.
Tweet