The Bureau of Labor Statistics released new data on metro area unemployment and employment yesterday.  The report noted that unemployment rates in November were down compared to the previous year in 341 of the 372 metropolitan areas in the nation.  The eight metro areas that contain portions of Arkansas were all included in that total.  Not-seasonally adjusted unemployment rates declined by more than a full percentage in each of the state’s metro areas over the past 12 months, with the largest decline being a 2.7 percent drop in Pine Bluff.

In the recent statewide unemployment report, Arkansas’ unemployment rate dropped by three-tenths of a percent in November (seasonally adjusted).  Comparable figures for the state’s metro areas do not uniformly reflect this dramatic decline.  From October to November, data from the Smoothed Seasonally Adjusted Metropolitan Area Estimates show declines of only one-tenth in Fort Smith, Hot Springs, Jonesboro and Memphis.  Texarkana was down two-tenths and Pine Bluff was down three-tenths.  Unemployment rates in Fayetteville and Little Rock were unchanged.  Although the magnitude of unemployment rate declines were smaller for most metro areas than the statewide average, the underlying components were all generally encouraging.  The number of unemployed was down in all eight metro areas, and the number of employed was higher in all except Memphis. 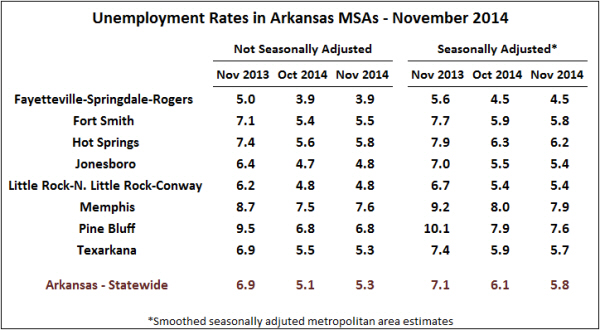 Payroll Employment
Nonfarm payroll employment increased by 0.5% statewide in November, but the gains were not reflected evenly across the state’s metro areas.  In a fact, payroll employment was down in both Hot Springs, Memphis and Pine Bluff.  Employment in Texarkana was unchanged and Little Rock saw only a slight increase.  Compared to a year ago, employment has declined in Fort Smith and Pine Bluff, but has increased in the state’s other metro areas.  Only Jonesboro has surpassed the nationwide growth rate of 2.0%.  In fact, at 2.9%, Jonesboro is the only metro area in the state to be growing faster than the statewide average of 1.5%.  Compared to pre-recession levels of seven years go, employment has increased in Fayetteville and Jonesboro, but is still lagging behind in most other metro areas. 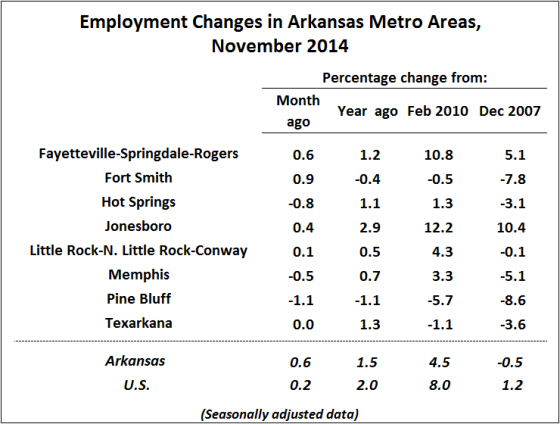