Unemployment rates were lower in March than a year earlier in all of Arkansas’ metropolitan areas.  With the annual revisions now complete, estimates of metro unemployment rates for late 2012 and early 2013 are now generally reported to be 0.3 to 0.5 percentage points higher than previously published.  Consequently, the newly-published unemployment rates are, in some cases, not much lower than the rates initially reported a year ago.  But with the revised statistics, year-over-year declines in unemployment range from 0.3% in Fayetteville to 1.2% in Fort Smith and Memphis.  Over the same period, the statewide unemployment rate declined by 0.5%. 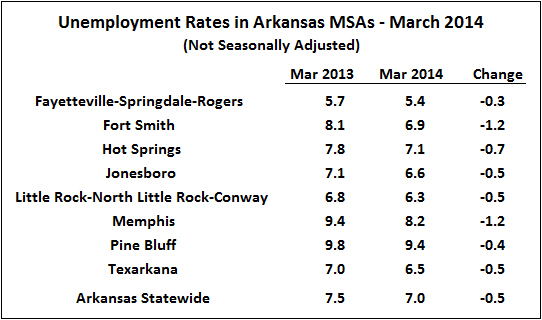 Smoothed seasonally adjusted estimates for March show monthly declines in seven of eight metro areas in Arkansas, with Fayetteville’s rate unchanged from February to March.  The largest monthly declines were in Hot Springs and Texarkana. 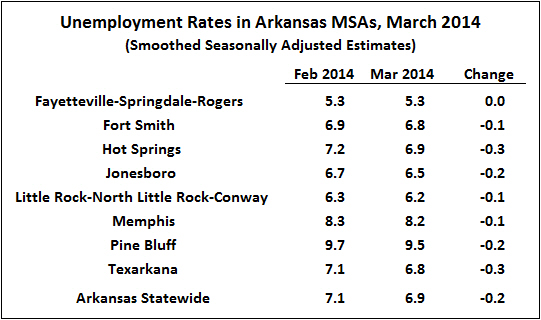 The figure below shows time-series for the smoothed seasonally-adjusted estimates.  Unemployment rates have declined substantially in all of Arkansas’ metro areas over the past 3 to 6 months.  The largest declines were generally in metro areas with the highest unemployment rates.  Since September 2013, rates in Memphis, Hot Springs and Fort Smith declined by a full percentage point or more.  As of March, all metro areas except Memphis and Pine Bluff had unemployment rates below 7%. 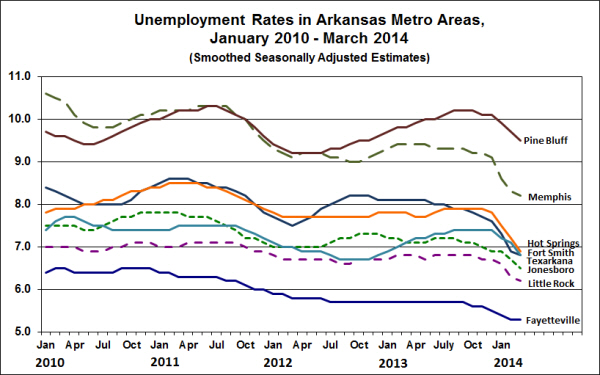 Payroll Employment
Nonfarm payroll employment increased in four of eight Arkansas metro areas in March.  Employment declined for the month in Fayetteville, Fort Smith, and Hot Springs, and was unchanged in Pine Bluff.  The largest gain was in Texarkana, where a 1.5% increase offset losses from the previous 11 months.  Compared to a year ago, employment was up in six metro areas, with the largest increase in Jonesboro (+3.5%).  Compared to pre-recession levels, employment is higher in only two metro areas:  Fayetteville and Jonesboro.  Statewide, employment remains 1.5% below its level in December 2007. 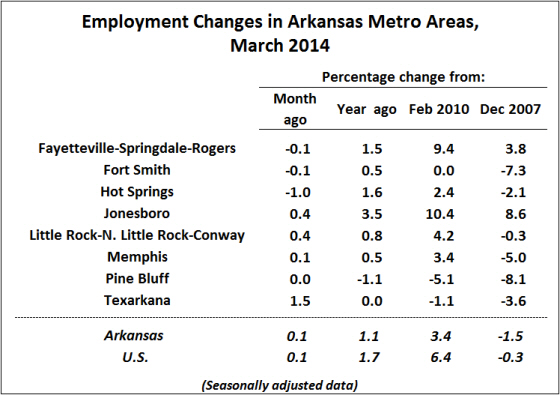