When the 2013 data on state personal income were recently released, we noted that per capita income in Arkansas was approximately 81% of the national average — essentially unchanged from the previous year.  But when it comes to purchasing power, incomes in Arkansas imply a higher standard of living than suggested by the 81% figure.

This morning, the Bureau of Economic Analysis released their first official set of statistics on Real Personal Income for States and Metropolitan Areas. (Experimental data had previously been released for years prior to 2012, see here and here).  The data confirmed that the cost of living is significantly lower in Arkansas than elsewhere in the U.S.  The overall price parity figure for Arkansas was 87.6, implying that prices were approximately 12½% lower than the nationwide average in 2012.   Adjusting incomes for this difference in the cost of living, Arkansas real incomes have a purchasing power that is 92.6% of the U.S. average.

As shown in the figure below, the 2012 statistics showed Arkansas to be the second-lowest cost state in the nation. 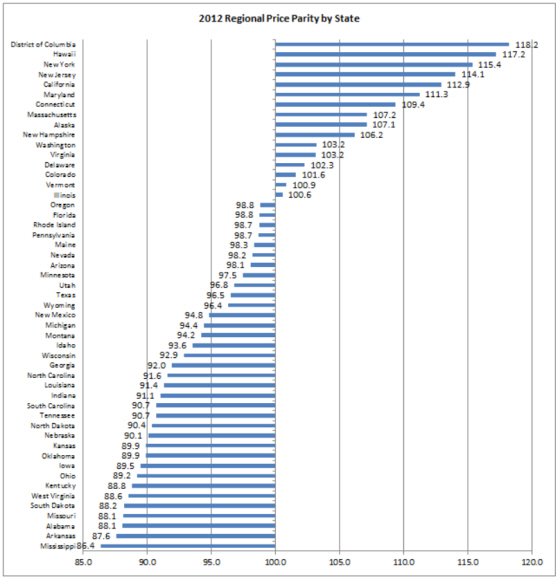 Regional price parities are generally lower in non-metropolitan areas than in metropolitan areas, and tend to be higher in the larger metro areas.  Differences in goods prices tend not to vary geographically as much as prices for services, and much of the regional variation in prices is driven by differences in rent costs.  The table below illustrates these patterns for Arkansas, breaking down prices of goods and services for metro- and non-metro areas of the state.   In the non-metro portions of the state, prices are generally 15% lower than the national average, led by rental costs that are just over half the U.S. mean.  The most expensive areas of the state are Memphis, Little Rock, and Fayetteville, each with an overall price parity exceeding 90.0.  Among metro areas, Jonesboro has the lowest cost of living.  In fact, today’s announcement from the Bureau of Economic Analysis showed Jonesboro to be fourth on the list of the most inexpensive metro areas in the nation. 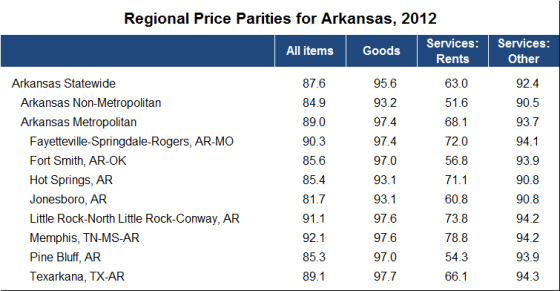