This morning, the Bureau of Labor Statistics (BLS) released new information on unemployment and employment in metropolitan areas.  The BLS News Release reported that unemployment rates were down from a year earlier in 322 of the nations 372 metropolitan areas.  All eight of Arkansas’ metro areas were included in that total, with the year-over-year declines ranging from 0.9% in Fayetteville to 1.8% in Pine Bluff. 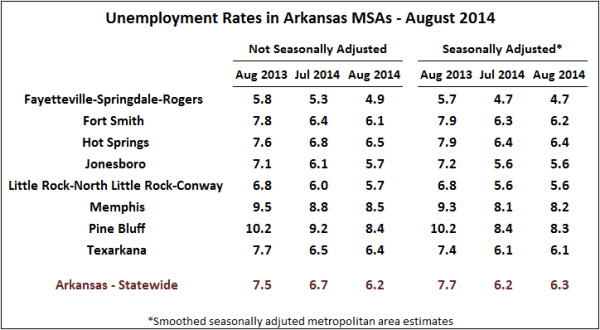 Over the past several months, we have noted a sharp decline in labor force participation in Arkansas.  In the report on statewide unemployment in August, we saw a slowdown of that trend.  As shown in the figure below, most of the state’s metro areas have shown a similar downward trend in the size of their labor forces since March 2014.  The weakening of the downward trend is also evident in most of the state’s metro areas (with the notable exception of Memphis).

There is no clear explanation of why we have seen such a sharp downward trend since spring.   One pattern that appears to generally hold in the figure below is the relationship between cumulative labor force contractions and the more recent weakening of the downward trend.  In particular, the metro areas that have experienced the largest cumulative reductions in labor force participation during 2013 and 2014 continue to trend downward.   The weakening of the downward trend is more apparent in metro areas that have only recently been subject to a declining labor force.  In fact, the labor force in Jonesboro — where cumulative increases over the past two years have been the largest — edged slightly higher in August. 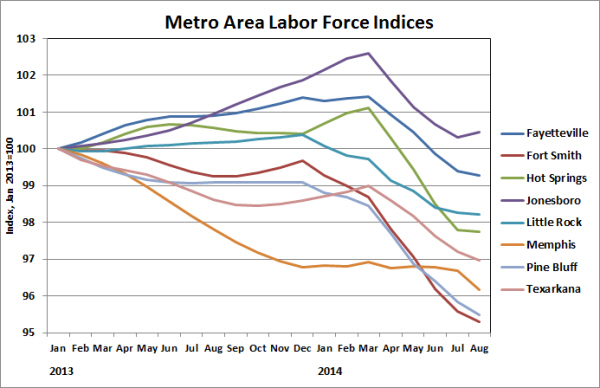 Payroll Employment
Statewide payroll employment growth was essentially zero in August, with metropolitan areas showing a wide range of changes.  From July to August, employment was down in four metro areas (Little Rock, Memphis, Pine Bluff and Jonesboro) and was up in the remaining four (Fayetteville, Texarkana, Fort Smith and Hot Springs).   Over the past year, only Pine Bluff has seen a net reduction in payroll employment (-1.4%), with increases in other metro areas ranging from +0.5% in Fort Smith to +1.9% in Jonesboro.  Compared to pre-recession employment levels, only Jonesboro and Fayetteville have seen net increases. 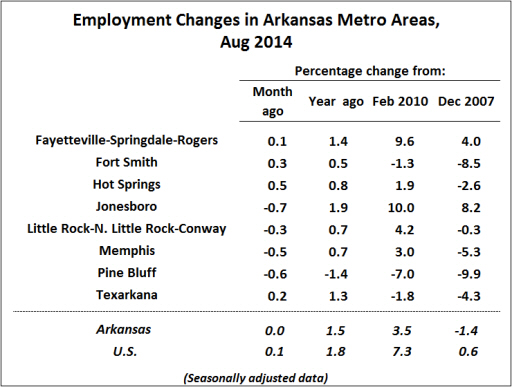