Compared to a year ago, unemployment rates have dropped significantly.  The not-seasonally adjusted data in the table below show declines ranging from 0.8% in Fayetteville and Little Rock to 1.9% in Memphis.  According to this morning’s news release, Arkansas’ metro areas were among the 357 of 372 metro areas nationwide that experienced declining unemployment rates over the past 12 months. 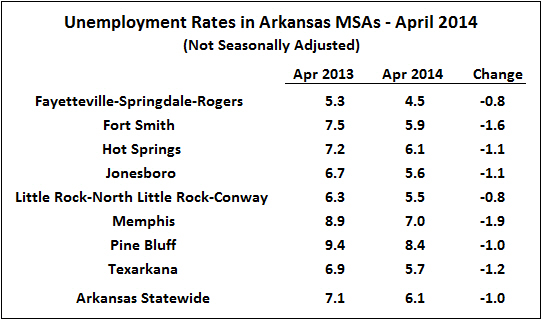 As was true for the state and national data, monthly changes in the unemployment rate were uncharacteristically large.  According to the smoothed seasonally adjusted data shown below, unemployment rates dropped by as much as 0.4% in Memphis and Pine Bluff. 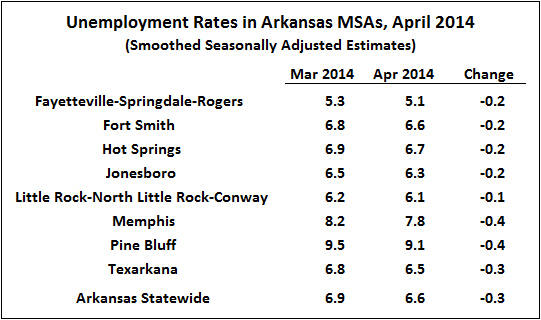 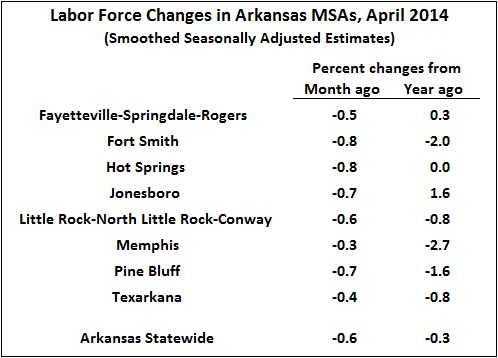 Payroll Employment
The data from the separate survey of employers does little to assuage concerns about the employment statistics from the household survey.  Monthly changes in nonfarm payrolls were mixed around the state:  employment declined in Fort Smith, Memphis and Pine Bluff, but increased in the state’s other metro areas.  Nevertheless, year-over-year gains have generally been modest.  Jonesboro and Fayetteville have seen sizable gains in employment over the past 12 months, but gains in the state’s other metro areas have been relatively small.  Employment in Pine Bluff continues to decline.  Compared to pre-recession employment levels, only Fayetteville and Jonesboro have surpassed previous peaks. 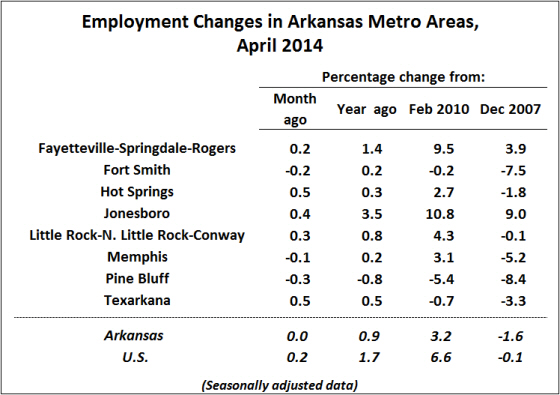 The April employment statistics represent just one monthly observation.  Recent employment reports have painted a picture of improving labor market conditions–with unemployment falling and labor force participation rising.  The April data broke from these patterns, but it is too soon to say whether this represents a weakening of previous trends or simply a one-month anomaly.