The Bureau of Economic Analysis announced this morning that Arkansas GDP growth in 2013 was 2.4%, up from a revised growth rate of 1.1% in 2012.  Arkansas’ growth rate was well above the national average of 1.8%, and ranked #16 among the 50 states. 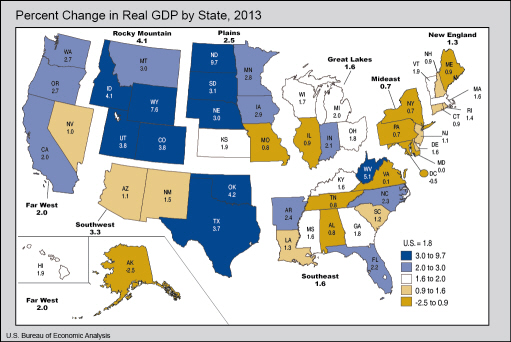 Today’s report included a comprehensive set of revisions that affected the data going back to 1997. Although Arkansas’ growth rate in 2012 was revised downward, the revisions generally paint a picture of stronger long-term growth for the state.  As shown in the figure below, the immediate post-recession years of 2010 and 2011 saw much stronger growth than previously estimated.  Growth in 2003 through 2008 was also revised upward.  Cumulatively Arkansas GDP growth is now reported to have increased by 28.3% over the 10 years from 2002-2012, up from a previously-reported total of 16.5%. 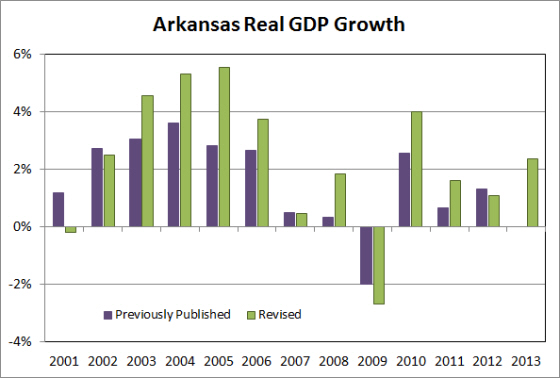 After the data revisions, Arkansas growth over the past several years is now estimated to have exceeded that of the U.S. as a whole.  The 2009 drop in output was previously estimated to have been smaller than the national average, but it is now reported to have been about the same (-2.7%).  Nevertheless, stronger growth in the decade before the recession — as well as in 2010 and 2013 — result in a significant cumulative improvement for Arkansas.  In per capita terms, Arkansas real GDP (in 2009 dollars) increased from $33,828 in 2003 to $39,111 in 2013 (an increase from 73.7% of the national average to 79.6%). 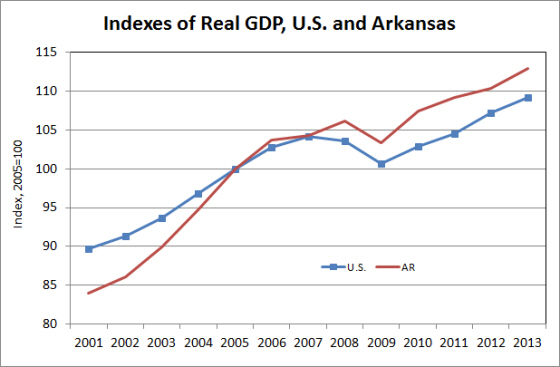 Over half of Arkansas’ growth in 2013 came from natural resource sectors:  Agriculture, forestry, fishing and hunting contributed over half of a percentage point to total growth and Mining accounted for more than a full percentage point.  The BEA news release noted that these sectors figured prominently in national growth patterns.  The Agriculture, etc. component contributed positively to growth in 49 states plus the District of Columbia.  Mining “was not a significant contributor to real GDP growth for the nation,” but it did boost the growth rates of some of the fastest growing states in the nation.  For example, mining accounted for 3.61 percentage points of North Dakota’s 9.7 percent growth.

Some sectors in Arkansas’ economy remain relatively weak, however.  Construction had a positive contribution to growth nationwide, but subtracted from growth in Arkansas.  Manufacturing in Arkansas showed essentially zero growth over the year, while it added 0.4% to the U.S. growth rate. 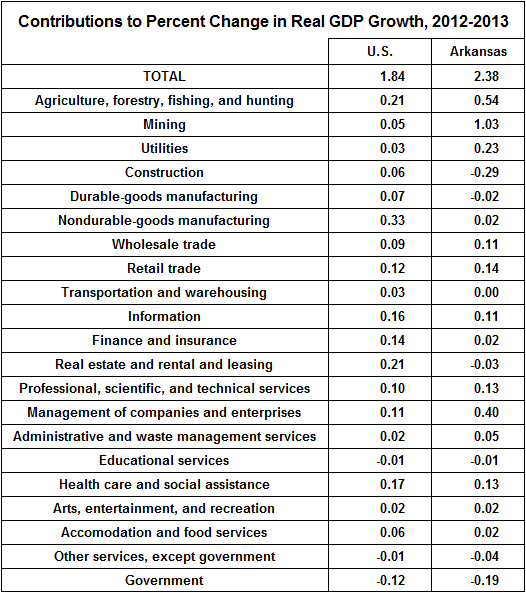