Unemployment rates continued to trend downward in most of Arkansas’ metro areas in July.  However, as with the statewide data, unemployment rates are falling against a backdrop of sharp declines in the labor force.

The typical summer spike in unemployment continued to drive month-to-month changes in the not seasonally adjusted data.  Compared to the July 2013, however, unemployment rates were down by more than a full percentage point for all metro areas except Memphis.  The largest year-over-year declines were in Fort Smith, Jonesboro, and Pine Bluff, all showing declines of 1.7 percentage points.

Adjusting for the predictable summer effect, data from the Smoothed Seasonally Adjusted Metropolitan Area Estimates showed unemployment rates generally falling from June to July.  Rates declined by 0.1 percentage pointes in Fayetteville, Hot Springs and Little Rock; and were down 0.2 percentage points in Jonesboro and Pine Bluff.  Rates in Fort Smith and Texarkana held steady, while the rate in Memphis increased by 0.3 percentage points. 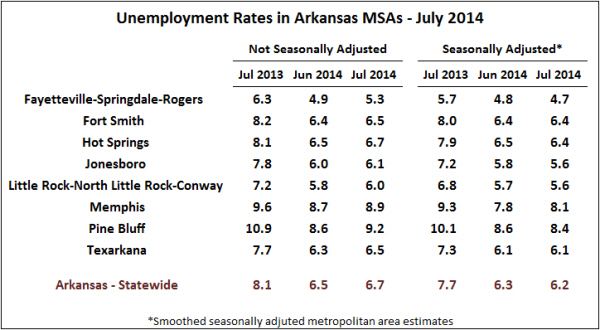 In the context of the statewide unemployment report, we have noted that the number of employed and the civilian labor force has been declining sharply this summer.   Over the past four months, employment has fallen by 21,632 (-1.7%) and the labor force has contracted by 32,374 (-2.4%).  As shown in the table below, the declines are also reflected in most of the state’s metro areas.  The largest percentage declines are in Fort Smith and Hot Springs. 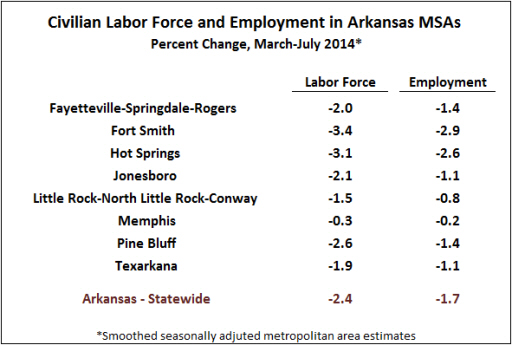 Payroll Employment
Monthly changes in payroll employment were mixed across Arkansas MSAs.  Employment declined in Pine Bluff, Texarkana and Fort Smith.   Small increases were reported in the state’s remaining metro areas.  The declines in Fort Smith and Pine Bluff represent continued weakness:  Employment is down from a year ago in both of those metro areas.  Compared to pre-recession employment levels, Fayetteville and Jonesboro remain the only metro areas in the state that have seen positive net job growth. 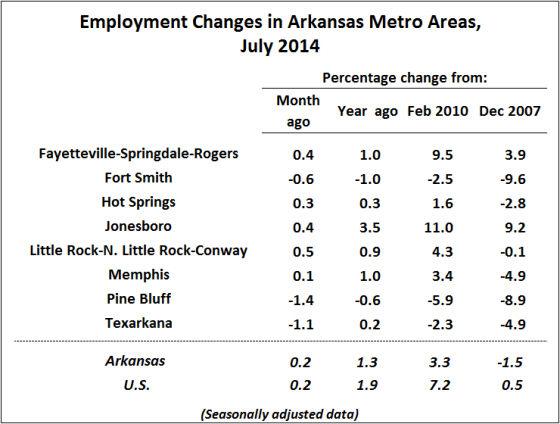