New data from the Federal Housing Finance Agency indicate that house prices in Arkansas increased modestly in the second quarter.  According to the FHFA “Expanded-Data Indexes,” prices of Arkansas homes increased 0.2% from the previous quarter, and were up 1.6% from a year ago.  Prices in Arkansas have been increasing at a significantly slower pace than the nationwide average.  For the U.S., house prices rose 1.3% in the second quarter, and were 6.2% above the levels of 2013:Q2.  Generally speaking, the areas of the country that experienced the largest house-price declines from 2007 through 2011 are the areas where we are seeing the largest price increases today.  On average, house prices did not decline dramatically during the market decline, and so recent price increases have been more muted. 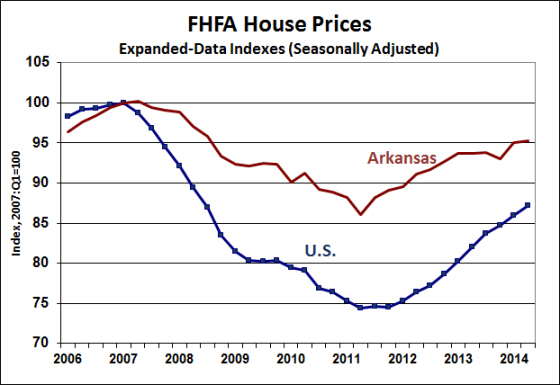 The expanded data indexes are not available for metro areas, but the FHFA does publish “All-Transactions Indexes,” which included data from home sales and refinancing appraisals (but without additional information from county property recorders’ offices).  As shown in the table below, prices have been increasing more slowly than the national average in all of Arkansas’ metro areas.  Compared to a 5.7% year-over-year increase for the U.S., prices have increased only 1.6% statewide.  The largest increases were in Memphis (3.7%) and Fayetteville (2.7%), each of which experienced above-average price declines during the 2007-11 period.  House prices have declined over the past year in Pine Bluff and Texarkana, and have risen only slightly in Hot Springs and Jonesboro. 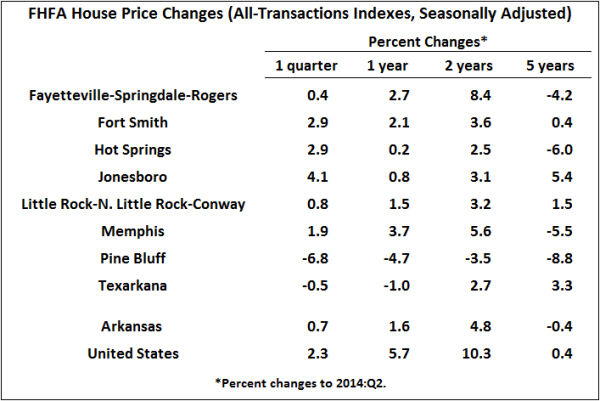 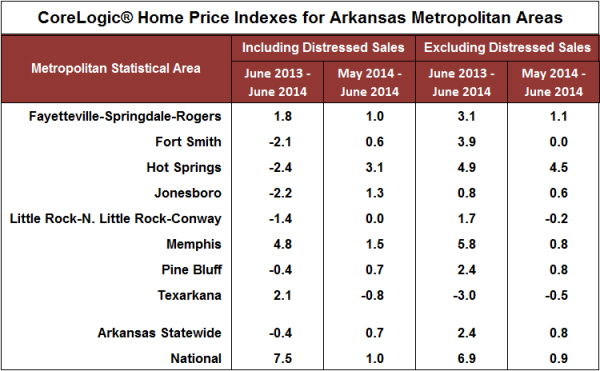