The latest unemployment rate figures for Arkansas metro areas provide another example of the importance of considering seasonal patterns when analyzing month-to-month data.  The raw, not-seasonally adjusted data released yesterday by the Bureau of Labor Statistics show unemployment rates declining between February and March for each of Arkansas’ metropolitan statistical areas (MSAs).  However, it is typical for March that unemployment rates decline:  Economic activity generally begins a seasonal resurgence in the spring, so unemployment rates tend to decline.  If we seek to look beyond routine seasonal changes in the data to discern longer term trends and changes associated with the business cycle, it is helpful to consider seasonally adjusted figures. 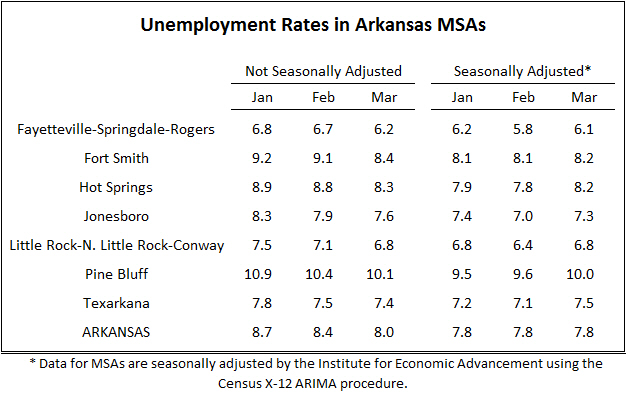 Beyond the month-to-month uncertainty associated with seasonal factors, metro area data are also more variable than the state-level or national data.  Hence, it is even more important to view MSA data from a longer term perspective.  With this consideration in mind, the figure below shows quarterly average unemployment rates for Arkansas MSAs.  Rates declined slightly in the spring of 2010, but then rose during the second half of the year (partly as a result of temporary Census workers being idled).  In nearly all of Arkansas’ MSAs, unemployment appears to have peaked in the fourth quarter of 2010 and declined in the first quarter of this year.  By way of comparison, the seasonally-adjusted unemployment rate for the state as a whole was 7.9% in 2010:Q4 and 7.8% in 2011:Q1. 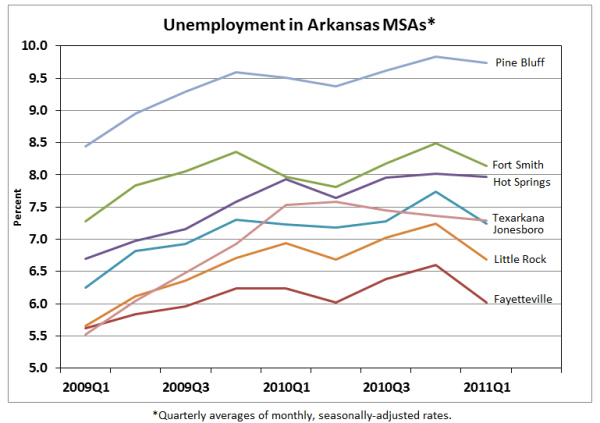