Preliminary figures indicate that Arkansas Taxable Sales rose slightly in the first quarter of 2011, up 0.7% from the previous quarter.   Following sluggish growth in the third quarter of 2010 and a decline in the fourth quarter, the most recent data show that sales have been essentially flat since the middle of last year. 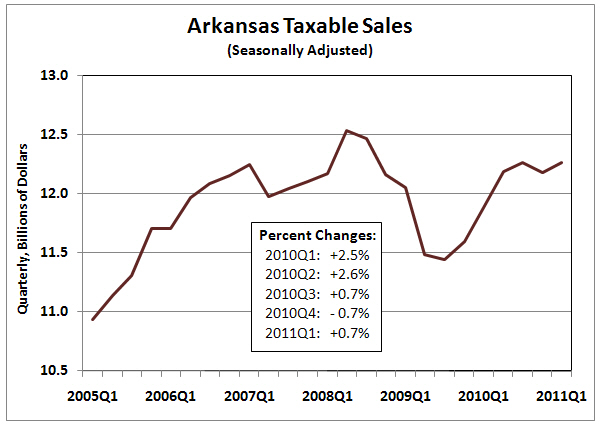 Sources: Department of Finance and Administration; Institute for Economic Advancement.

Raw monthly data from the Department of Finance and Administration (DFA) show that recent sales tax collections have been above the levels of the previous year, and totals for the fiscal year-to-date have been running close to official forecasts.  But recent monthly figures have been less than robust, coming in below forecast.

As shown in the figure below, Arkansas Taxable Sales had risen sharply during the first half of 2010, but slowed in the latter part of the year.  The sharp decline in December prompted speculation in a previous post as to whether unusual holiday spending patterns might be to blame.  Sales during the first three months of 2011 have rebounded somewhat, but remain below the peak levels of mid-2010. 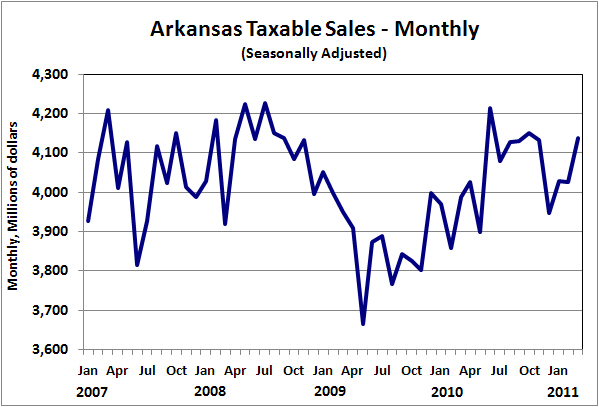 Sources: Department of Finance and Administration; Institute for Economic Advancement.

The sluggish figures for the first three months of 2011 suggest that the weakness in December sales was not an anomaly.  However, there is one important factor to consider in interpreting recent data:  Gasoline is not subject to sales and use taxes in Arkansas, so it is not included in the Arkansas Taxable Sales figures.  Data from AAA shows that  gasoline prices in Arkansas rose by more than 40% between September 1, 2010 and April 1, 2011.  Even with slowing demand due to conservation responses, that rate of price increase suggests that people have been devoting a larger share of their total spending to fuel consumption, and a smaller share to other categories that are included in Arkansas Taxable Sales.  This factor is likely to continue to restrain Arkansas Taxable Sales growth in coming months.

The Arkansas Taxable Sales series is calculated by the Institute for Economic Advancement to serve as a timely measure of Arkansas retail sales.  The series is derived from sales and use tax data from DFA, adjusting for the relative timing of tax collections and underlying sales, changes in tax laws, and seasonal patterns in the data.

* Data are preliminary until the release of the DFA report, Arkansas Fiscal Notes for April 2011, and will be updated when information becomes available.