Arkansas’ unemployment rate remained unchanged at 7.8% in March (seasonally adjusted).  The latest data from the Bureau of Labor Statistics and Arkansas Department of Workforce Services show that the number of unemployed rose slightly, but the number of employed rose by nearly 4,400.  The change in March represents the eighth consecutive month of increases.

The household survey and the establishment survey can sometimes provide conflicting signals.  However, the two surveys have recently been presenting a consistent picture of the Arkansas employment market.  As shown in the figure below, both measures have generally  been rising since the beginning of 2010.  The household survey shows employment up by over 21,000 since December of 2009.  Meanwhile the payroll survey shows employment up by about 24,600 since that series hit a trough in February 2010. 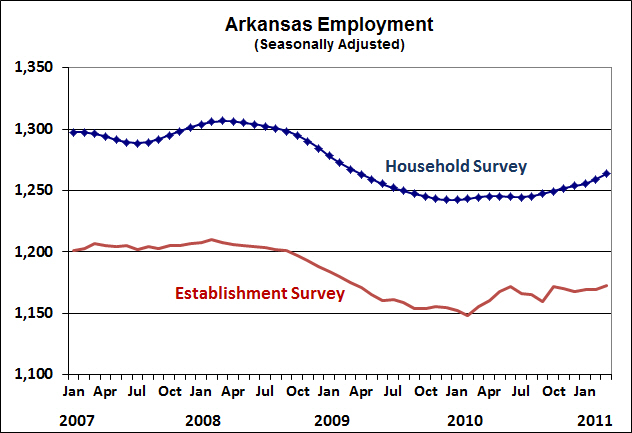 The latest reading on nonfarm payroll employment shows the number of jobs up by approximately 3,200 in March (seasonally adjusted).   Monthly losses were recorded in several service-providing sectors, including two of the areas that have shown the most strength during the recovery, Education and Health Services, and Business and Professional Services.  Construction and Manufacturing both showed increases for the month, but employment in these goods-producing sectors is down from a year ago.  Total government employment is also down from a year ago, with lower Federal government employment relfecting (in part) the temporarily high Census Bureau employment of spring 2010. 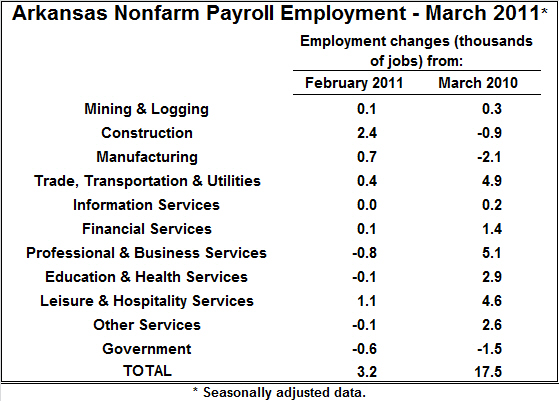