Arkansas’ unemployment rate remained unchanged at 7.8% in February (seasonally adjusted).  The latest data from the Bureau of Labor Statistics and Arkansas Department of Workforce Services show that the number of unemployed dropped for a second consecutive month, down by 768.  The survey of households also showed that the number of employed increased by 3821 in February, and was up by nearly 16,000 from a year earlier.

Data from the payroll survey showed similar gains in February, with the number of jobs up by 2,000 for the month.  The gains were exclusively in the service-providing sectors.  Goods producing sectors showed a total decline of 2,900 jobs for the month.   Large increases were recorded for Professional and Business Services (up 2,800) and Trade, Transportation, and Utilities (up 1,600). 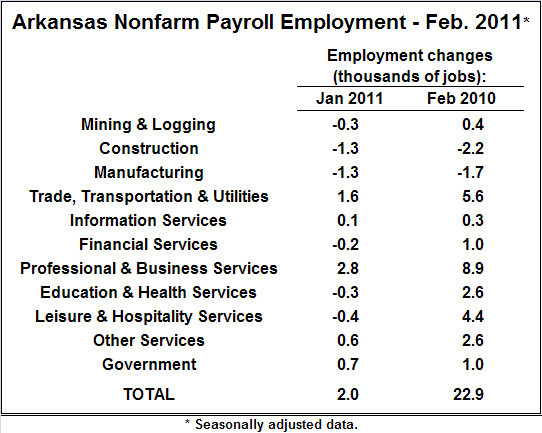 A similar pattern can be seen in employment growth since February of last year.  Total employment increased by nearly 23,000 jobs.  Employment in the goods-producing sectors declined by about 3,500 jobs, with service-providing sectors adding 26,400 jobs.

Currently-available data suggest that February 2010 marked a low point in the employment series for both the U.S. and Arkansas (see chart below).   The increase in Arkansas employment over the past 12 months represents a recovery of about 39 of the job losses recorded from the start of the recession (December 2007) through February 2010. 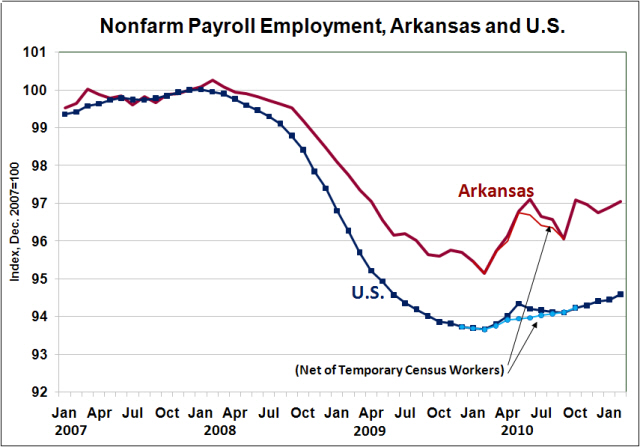