New data on metropolitan area GDP were published by the Bureau of Economic Analysis last week.  For the metro areas in Arkansas, the news was decidedly mixed.  Only one of Arkansas’ metro areas — Fayetteville-Springdale-Rogers — had GDP growth in excess of the national average for metro areas:  Growth in Northwest Arkansas was reported at 4.4%, compared to 2.5% for the aggregate of all U.S. metro areas.  At 2.4%, Jonesboro’s growth rate was near the national average.  At the other end of the scale, GDP was reported to have contracted in three metro areas, with losses in Hot Springs and Pine Bluff reported at -3.0%. 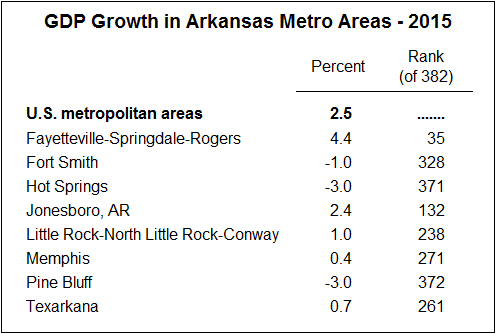 The data for a single year do not always reveal the underlying growth trend.  As shown in the figure below, for example, the contraction in Hot Springs interrupted a series of years with relatively robust growth.  Even after declining 3% in 2015, GDP in Hot Springs was up 12.7% from it’s pre-recession level in 2007.  Over the same period, Fayetteville was the fastest-growing metro, with cumulative growth of 28.5%.  At the other end of the scale, GDP in Pine Bluff was down nearly 14% from its 2007 level. 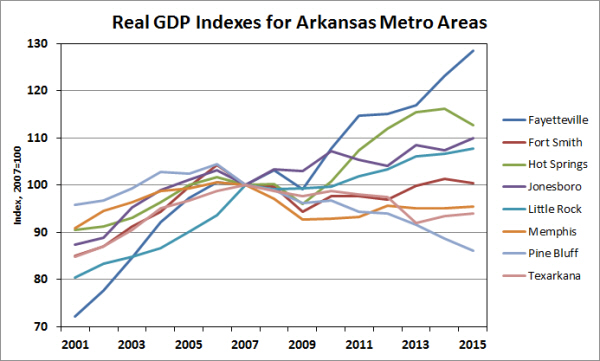 Another caveat to the interpretation of the latest data:  The figures for 2015 are considered to be “advance estimates,” subject to considerable future revision.  The data release last week included revisions to the data for 2014, which were sizable in some cases.  In fact, for four metro areas (Hot Springs, Little Rock, Memphis, and Texarkana) even the direction of GDP change in 2014 has now been revised.  The update to Texarkana data is particularly large: having been originally estimated at -1.0%, GDP in 2014 is now reported to have increased at a 1.6% rate. 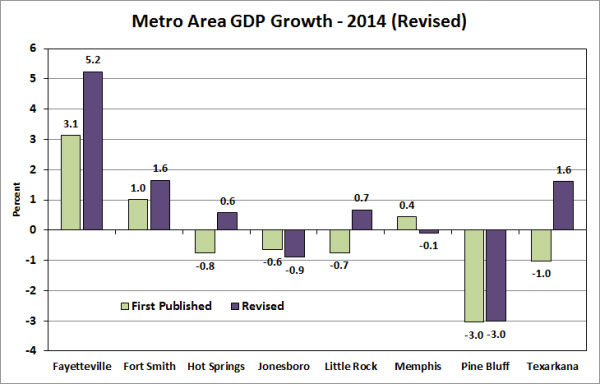 The revisions to 2014 data show that the new data for 2015 should be interpreted with caution.  The multi-year trends in the data are revealing, but the latest reading on annual growth rates may look quite a bit different when the data are revised a year from now.