New data from the Bureau of Economic Analysis shows total personal income in Arkansas increasing by 1.1% in the second quarter, up from a growth rate of 0.6% in the first quarter (revised).  The second quarter growth rate slightly exceeded the national average of 1.0%, and represented the 16th highest growth rate among the 50 states.  Compared to a year earlier, Arkansas personal income was up 3.1%, compared to 3.2% nationally. 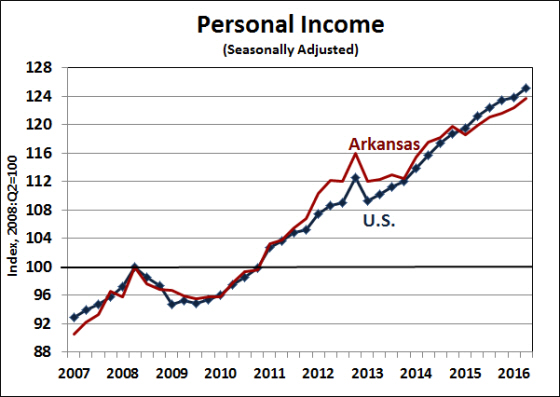 A breakdown of earnings by industry shows gains in most of Arkansas’ sectors.  One clear exception was mining, which has been impacted by low oil prices.  The BEA report noted that lower earnings in mining was the leading contributor to below-average earnings growth in several of the slowest growing states (which are also significant oil-producing states).  Earnings growth was also negative in Construction, Educational services, as well as in the leisure and hospitality services sectors. 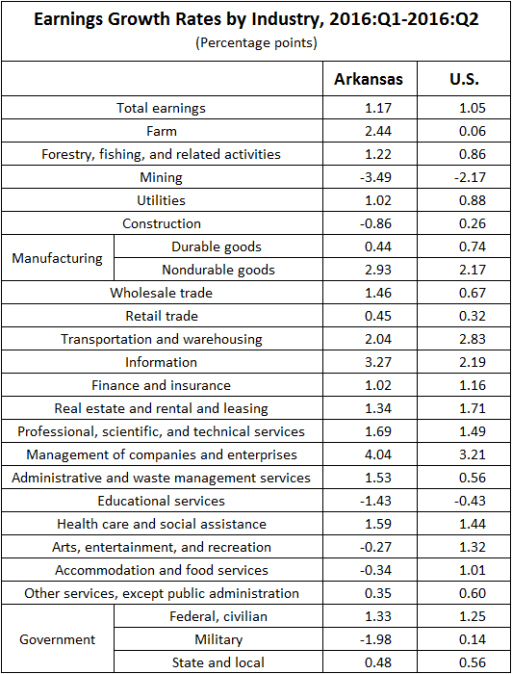 Today’s report incorporated annual revisions to the personal income data.  For Arkansas, the revisions represented fairly substantial downward adjustments to income.  As illustrated in the figure below, Arkansas personal income was revised down by 1.5% in 2013, by 0.5% in 2014, and by 2.2% in 2015.  The revisions were primarily attributable to new figures for Proprietors’ income, as well as Dividends, interest and rent.  The BEA reported that nonfarm proprietors’ income, in particular, was subject to substantial revision due to methodological improvements that were implemented with this revision. 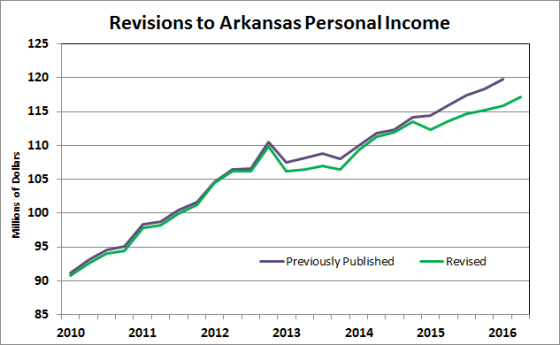 The data revisions had a particularly noticeable impact on measured income growth in 2015.  As previously reported, the data showed a growth rate of 3.6% from 2014:Q4 to 2015:Q4.  The revised data now show that increase to be only 1.5%.