New statistics for metro area employment and unemployment were released this morning.  The data show that recovery from the pandemic-related unemployment spike of April 2020 continues across the state. 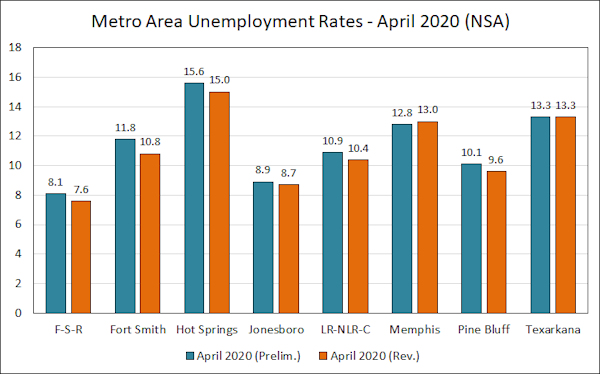 The data released this morning showed that unemployment rates continue to decline.  Unemployment in Northwest Arkansas has fallen below 4% and Jonesboro reached that benchmark in March.  The most significant recovery is Hot Springs, down 8.9 percentage points from April 2020 through March 2021.  As of March, Pine Bluff and Texarkana had the highest unemployment rates among Arkansas metro areas. 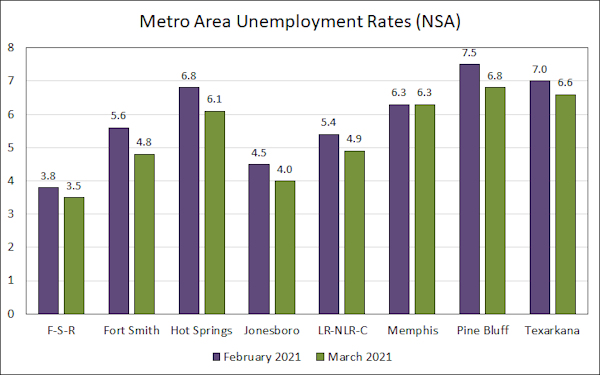 Payroll Employment
Nonfarm payroll employment continued to increase in six of the eight metro areas that cover parts of Arkansas.  Employment in Northwest Arkansas was unchanged for the month and Hot Springs saw a decline of 1.0%.  With the March downturn, Hot Springs remains 4.0% below the employment level of March 2020.  Jonesboro, Little Rock, Memphis and Texarkana have also seen year-over-year declines larger than the statewide average (-2.0%) but none of the Arkansas metro areas have suffered job losses as large as the national average (-4.5%). 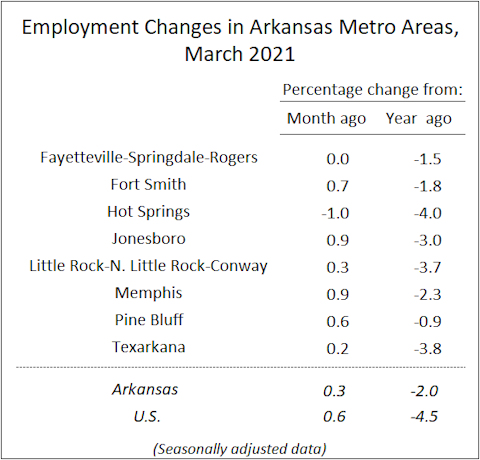 The figure below provides more detail on the relative magnitudes of employment losses last spring, as well as the state of recovery as of March 2021 (with the data indexed to a common value of 100 for February 2020).  Pine Bluff experienced the smallest percentage decline in employment from February 2020 through April 2020, and remains the metro area with the smallest net decline since the onset of the pandemic.  Hot Springs suffered the state’s largest decline in April 2020, and was showing signs of a significant rebound until the first part of 2021. The Fayetteville-Springdale-Rogers metro area saw 2020 job losses commensurate with those in Memphis and Little Rock, but has rebounded to be nearly tied with Pine Bluff for the smallest net decline since February 2020. 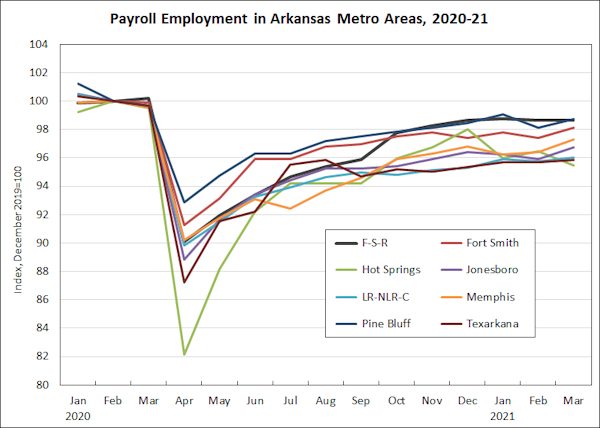